Origins of the 50th Earth Day

Did you know that Earth Day is the largest grassroots environmental movement in history? It’s also recognized as the most widely observed secular holiday in the world. But what led to this massive social movement?

The stirrings of the modern environmental movement began in the 1960s. People were becoming increasingly aware that our industrial activities were slowly poisoning the environment (and ourselves). This is credited to the publishing of Rachel Carson’s Silent Spring in 1962, which exposed the popular pesticide DDT as a poison that was killing birds and wildlife. The famous “Burning River” incident on the Cuyahoga in 1969 also played a role. (The Cuyahoga had actually caught fire at least 12 times previously, and much worse; the fire of 1969 was just the most publicized).

Another key event on the timeline of pollution awareness was the debate surrounding the prevalence of lead in the environment, spearheaded by geochemist Dr. Clair Patterson in 1963.

Patterson’s early research focused on discovering the age of the Earth by analyzing proportions of uranium isotopes and lead in rocks. Uranium decays into lead, but at the time that rate of decay was not known. If the age of a given piece of rock (in this case, granite) was known, the proportion of uranium to lead could be used to calculate that decay rate. This “atomic clock” could then be used on meteorite samples, which were formed at the same time as the rest of the Solar System – giving him the age of the Earth by proxy.

He thought it would be easy. 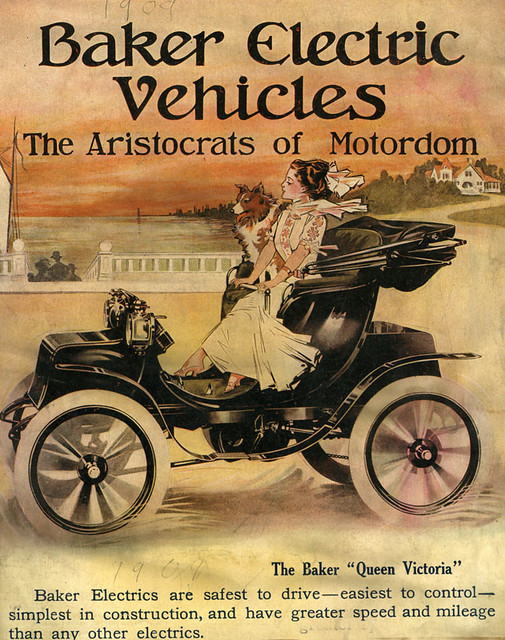 An ad for the Baker “Queen Victoria” Electric Vehicle, ca. 1909

However, his analyses were repeatedly stymied. The lead numbers were coming back much too high. He found that his equipment and samples were somehow being contaminated with lead, giving inflated results. He cleaned his lab scrupulously, and observed very strict procedures to prevent contamination. He spent years trying to attain the ultimate clean lab, but lead contamination was still sneaking in somehow. He even stripped a room to the studs to rip out the lead pipes and lead wires in the walls, and rebuilt the lab to his lead-free standards. He was finally satisfied with his granite results and was at last able to prepare his meteorite sample for analysis in his ultraclean lab. He sent it off to the mass spectrometer, and demonstrated that the age of the Earth was 4.5 billion years old.

But he couldn’t get the lead contamination problem out of his mind. All he knew was that lead was everywhere – in hair, on skin and clothes, on dust particles, even in dandruff – and that it was so concentrated, that even the lead particles shed from a person’s hair while walking into a room could contaminate an entire lab.

He didn’t know it at the time, but this discovery would lead him down a path that would ultimately put him in the crosshairs of one of the giants of the fossil fuel industry.

To understand why, we have to go back a bit further to the early 1900s – when automobiles were just starting to become accessible to the working class.

Deafening engines, noxious exhaust, and engine knocking made combustion engine vehicles more intimidating to prospective buyers than equally popular electric vehicles, which did not give off dirty exhaust, were clean and quiet, did not require gear changes or crank-starting, and (especially after the widespread installation of home electricity in 1912), could be easily charged at home. Despite it being a known poison, tetraethyl lead (TEL) was marketed by General Motors engineer Thomas Midgley Jr. as a product that could be added to gasoline to reduce engine knocking, increase fuel combustibility, and make vehicles less noisy and more appealing to prospective buyers. (He’d discovered that ethanol was also an effective anti-knocking agent, but ethanol couldn’t be patented.) The gasoline with added TEL was marketed under the brand-name Ethyl and the first tank was sold in 1924.

Unfortunately, there was a problem. Upon combustion, the elemental lead in TEL becomes airborne and can be breathed in by people, settle in soil, and be ingested in our food – causing a long list of both acute and often insidious, and irreversible chronic health effects. The health consequences of what was essentially a marketing ploy continue to be felt even today. (I strongly recommend this article to learn more.)

But that wasn’t the only problem. Nearly 100 workers at 2 separate TEL processing plants in Ohio and New Jersey died or were hospitalized with lead poisoning in 1924. (Midgley himself had become ill with lead poisoning the year before.) An official from Standard Oil insisted the afflicted workers, suffering from hallucinations and erratic behavior, had simply “worked too hard”, and the danger was downplayed. Throughout the mid-1920s a number of people attempted to blow the whistle on lead poisoning, and the Surgeon General even called a conference to discuss it; but the opposition died away, and the rise of leaded gasoline could not be stopped.

As the post-World War II Atomic Age prosperity catapulted society into its golden age, and gasoline consumption rose along with it. The danger was forgotten, and cars were marketed as a status symbol and the ultimate attainment of the American Dream. People bought cars in record numbers, and the amount of lead in our air, water, and soil began to rise steeply — as Patterson was about to discover. 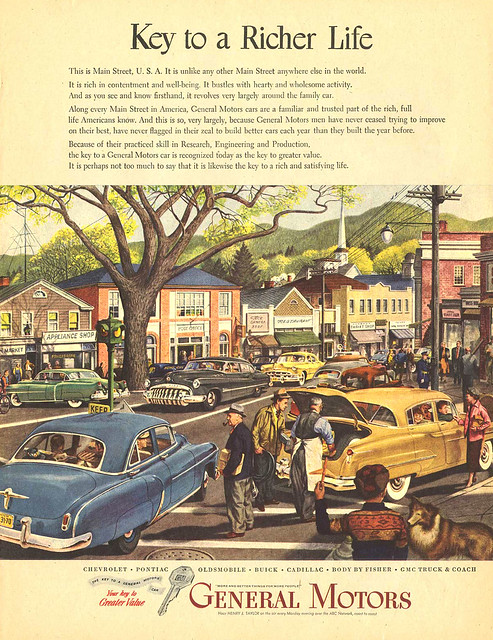 After determining the age of the Earth, Patterson became a professor at Caltech and moved on to other research topics, seeking to discover how the Earth’s crust formed by  sampling uranium in seafloor sediments and ocean water. Instead, he discovered abnormally high levels of lead there, too.

In fact, lead levels in the seafloor sediment were far beyond what could be explained by natural phenomena. He searched the literature for an explanation, and found that only human industrial activity could explain his results.

Despite knowing that the consequences would likely mean the end of his career, Patterson continued his research and began to publish a series of papers on his results. In 1963 he was published in Nature, which attracted the attention of The American Petroleum Institute (API), who had funded his ocean sediment research. They pulled their funding, attempted to get him fired from Caltech, tried to buy him out, asked the Atomic Energy Commission (who funded his study on the age of the earth) to stop funding him, and even attacked his character; but Patterson was not swayed. He had attracted the attention of the scientific community, and in 1965 he submitted a paper in the Archives of Environmental Health that unequivocally implicated the fossil fuel industry in the abnormally high levels of lead he measured. He asserted that this lead contamination would have dire consequences for human health. It was peer-reviewed by Robert Kehoe, a researcher paid by the API to downplay the danger of industrial lead. Kehoe allowed the paper to be published, believing that Patterson’s conclusions were laughable and would have a negative effect on his credibility.

Patterson did indeed receive scathing criticism from toxicologists, who was basically told by critics to leave biology to the biologists, and go back to staring at rocks. He was even accused of being “a second Rachel Carson” and that his paper was “science fiction”. The two main arguments they repeatedly cited (from Kehoe, who was the source of the data they were citing) was that background levels of lead in the environment were just naturally elevated, and that the threshold for acceptable levels of lead in the human body were much higher than he was claiming.

Patterson was undaunted. He believed that science revealed truth, whether it was popular or not.

The only viable response to the criticism, therefore, was to do more research.

He traveled to Greenland and Antarctica to sample lead trapped in ice cores dating back before the Industrial Revolution, and the numbers were astounding. The ice showed a 200-300 fold increase in lead levels since the 1700s.

He even found elevated lead levels in ice much further back in time, corresponding to the large-scale smelting of lead by the Romans over 2000 years ago, who used lead in everything – from their famous aqueducts, to cosmetics, various containers and ornaments, weapons, and currency. They even used lead acetate to sweeten wine. As in the 20th century, the majority of lead poisoning victims were the working class – or in Rome’s case, the slaves working in the lead mines. Pliny the Elder knew that lead-sweetened wine caused “paralytic hands”, and suspected the work force was being poisoned; but the mining of lead continued, even though they were aware that lead was poisonous. The aqueducts were built, and then Rome collapsed. Widespread lead poisoning and “degeneracy of the populace” is thought by some to have played a role in the fall of the Roman Empire.

The use of lead nevertheless continued on through the centuries – it was put in paint, in printing presses, in cosmetics, and in pipes – right up into the 1960s, where Patterson would deduce that the 83 million cars on the road at that time were spewing lead out of their tailpipes.

Click here for Part II of this two-part blog series!