Nature News & Comment, an online newsletter, published an article on 17 June 2013 by Sharon Oosthoek about a recent study from Europe and Australia regarding the impact of pesticides on aquatic organisms. She comments on a study by Mikhail Beketov and others that was published in the Proceedings of the National Academy of Science. The not too surprising results show that “Pesticide use has sharply reduced the regional biodiversity of stream invertebrates, such as mayflies and dragonflies.”

The researchers examined 63 streams in Germany, France and southern Victoria, Australia. They found 27 percent (Australia) to 42 percent (Europe) fewer species in highly contaminated streams than in uncontaminated streams. They further noted that existing European regulations are not preventing such loss, and that with the importance of stream invertebrates in the food chain, this is cause for great concern.

I had noted similar but slightly different problems while doing distributional studies of dragonflies and damselflies during the early 1990s. Unfortunately, I did not have chemical analysis or hard numbers to verify my results. I had been doing a lot of work along central Ohios famed Big Darby Creek, just west of Columbus. The species diversity there was significant and offered many hours of enjoyable effort sampling and documenting that diversity. The Big Darby is one of Ohios best warm-water streams. While it does not contain any unique dragonflies, it does have a unique fish and several rare mollusks. 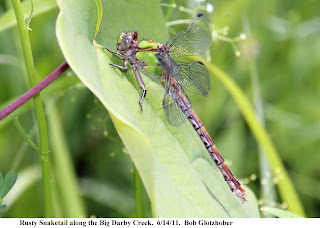 After working the Big Darby for a couple of years, I managed to take a trip to the Hocking River between Rockbridge and Logan, Ohio. Over the course of a couple of visits, I noticed most species were identical to those on the Big Darby. The only species of dragonfly I could not find at that time on the Hocking was the Rusty Snaketail (Ophiogomphus rupinsulensis), a member of the Clubtail family, many of which are highly sensitive to degraded stream conditions. (Since then, more discoveries of other Clubtails on the Big Darby may have skewed the numbers off more–but I have not been back to the Hocking for an equal comparison.)

More important than the single missing species, was the strong impression of an overall reduction of numbers. While most of the same species were present in the Hocking River as in Big Darby Creek, their numbers were substantially reduced in comparison. I did not have the opportunity or time to make statistically valid counts, but the difference was as clear as night and day. One species for good comparison was the American Rubyspot damselfly (Hetaerina americana). They were thick amongst the Water-willow (Justicia americana) that grows along the stream banks at Big Darby. While Water-willow is also abundant along the Hocking River, the Rubyspots were much fewer in number. My hypothesis has always been that the pollution in the Hocking River may have eliminated the Rusty Snaketail–a single species–but dampened the populations of other dragonflies and damselflies. Hence the most significant impact was low populations due to the stress of the pollution. (I should note that in the twenty years since, the quality of the Hocking is reported improved but I have not yet taken the opportunity to re-sample that river.) 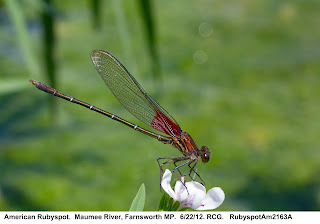 All this, of course, is anecdotal and lacking any hard evidence. But let me put forth one more comparison that may be significant, though also anecdotal. In 1895, professor David S. Kellicott published his second paper on the “Catalogue of the Odonata” of Ohio in the Journal of the Cincinnati Society of Natural History. Kellicotts first paper on this subject in 1894 was a very brief note, so his 1895 paper was the first significant record of dragonflies and damselflies in Ohio. Kellicott listed 68 species, a far cry from the 164 species known from Ohio today–but a very significant first one-man effort to note what was in the state. The year 1895 was not before pollution from eroding stream banks and urban sewers, but it was before pesticides and herbicides. Unfortunately, Kellicott does not always describe in detail where he did his work, but he did report one very interesting observation in central Ohio (possibly Central College or the Big Darby) that is almost hard to believe today. In commenting on the fall congregation of American Rubyspots in early October, he reports that “Both sexes assemble, and they rest so compactly that I have captured seventy-five by one sweep of the net.” While I’ve seen Rubyspots congregating on the stream-side vegetation, I have never seen a mass more than about one tenth of such density. If he was collecting at either the Big Darby or at College Station, he would have been above any major sewage outflows, so other than siltation the area probably experienced little pollution. Not even the Big Darby is pristine enough today to support populations of Rubyspots or other Odonata at such levels.

Returning to Beketovs paper and his remarks, one bears further repeating. “I think we should care about this because invertebrates are an important part of the food web.” I would add to that statement, that we should care even just because of the diminished richness of the environment that can enrich our souls. Can you imagine seeing American Rubyspots or any other damselfly or dragonfly in numbers comparable to those we see in photos of the Monarch Butterflies in the highlands of Mexico? Literally dripping off the vegetation! Can we imagine ever returning the Big Darby, the Hocking River or the Scioto River to quality so grand that such sights could be seen again? If we dream enough, we can take better control of our environment, and it could happen.