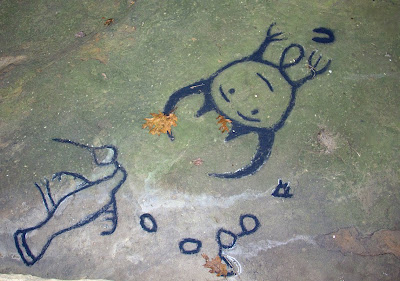 Managing natural areas is a combination of science and art. This is a widely accepted idea which reflects that natural area management requires a lot of scientific background knowledge about the ecology of a system, plus a bit of gestalt feeling about what will likely work. Experience strengthens hard knowledge to develop that gestalt and together the best possible management takes place. However, being partly art, sometimes things dont work perfectly as planned. We don’t yet know enough (and never will) to be perfect natural areas managers, but we are getting better. Sometimes, when operating on the dual principles of science and art, things appear to be working well–at first.

Leo Petroglyph State Memorial is a 12.24 acre site operated by the Ohio Historical Society and, in recent years, with our partner the Friends of Buckeye Furnace. Leo is located in Jackson County a few miles north of Jackson and a couple of miles off of U.S. 35 near the tiny berg of Leo. It was preserved primarily due to the 37 plus petroglyphs carved into the sandstone bedrock, presumably about 1,000 years ago by American Indians. It is a wonderful example of symbolic petroglyphs, with stylized figures of birds, animals, human and animal footprints and other images. 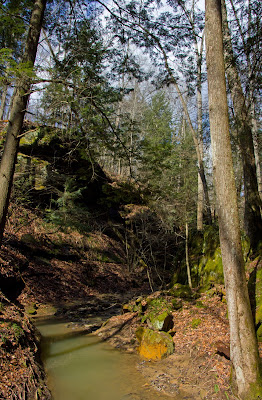 Leo Petroglyph is also important for the natural area that surrounds it. A half-mile nature trail winds down the hill from the kiosk sheltering the petroglyphs into a steep sided gorge cut by a small stream through the Mississippian Sharon sandstone conglomerate rocks. Cliffs range from twenty to sixty-five feet high, and Eastern Hemlocks (Tsuga canadensis) line the ravine and some of its slopes. Many other interesting features and wonderful spring wildflowers augment the site–including the rare Round-leaved Catchfly (Silene rotundiflora).

In the late 1970s and early 1980s, the land immediately west of the memorial was strip mined for coal. The staff of the Ohio Historical Society first tried to restrict the mining further from our boundary. Then they tried to obtain mitigation, which was at least somewhat successful. Natural History staff conducted breeding bird surveys and water sampling to establish baseline data and to document changes as the mining progressed. While staff was not happy with the potential impacts, it appeared that the mitigation efforts were working. No significant deterioration of the stream or the breeding bird life was noted. All was well–or so it seemed.

Fast forward thirty plus years. A walk along the eastern edge of the gorge reveals apparently healthy hemlocks with reasonable regeneration taking place. In fact, in one section above the top of the cliffs on the east side is a dense grove of seedling and sapling hemlocks that is quite vigorous. 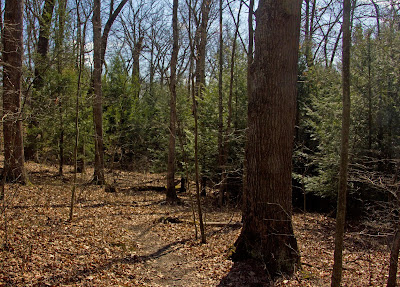 However, observations in the bottom of the gorge–especially on the western cliff edges and slopes–shows a number of dead hemlocks and hemlocks snapped off half way up or uprooted by the wind. More importantly, there are very, very few seedlings or sapling hemlocks on the west side of the ravine. The very top of the slopes here are a mixed association of oaks and other hardwoods a condition that is as it was thirty years ago. But today the band of hardwoods is narrower than it was before the strip mining removed additional trees outside the memorials boundary. Apparently, the narrower band of hardwoods was enough to provide some protection for the hemlocks–but over an extended period of time it was not enough. The prevailing westerly winds drive through this band of trees, and the hot afternoon sun beats through them. The combined impact has not only allowed the topping and uprooting of some hemlocks, but more importantly, the habitat along the western edge of hemlocks is now warmer and drier. Seedlings don’t survive. Replacement of those trees that die of old age or of wind damage is not taking place.

Natural areas, especially forest lands, often change very slowly to surrounding impacts. The literature suggests that hemlocks are long-lived, with trees sometimes reaching 600 years old or more. Time is an important consideration. As we manage natural areas we need to consider not only what we can see taking place right now, but we need to learn from experience and learn how to look 30 or 50 or 100 years out into the future. We are currently trying to do that at Leo Petroglyph. 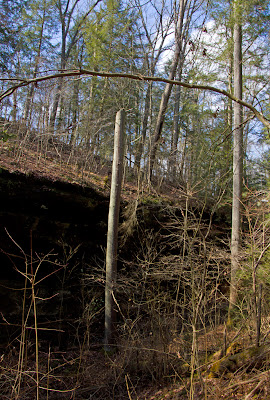 The Ohio Historical Society is exploring ways to add a buffer from the west winds and the hot afternoon sun. Of course, adding a buffer means finding funds and a willing landowner. We have started a process to find a grant or other sources of funding. Naturally, most grants require matching funds. If you are interested in helping by making a donation for the Leo Petroglyph Natural Area Fund, contact Kathy Wyatt in the OHS Development Office at [email protected] . Well keep you posted on our progress. Hopefully land purchase, cost of a protective fence and planting of trees and shrubs can proceed fairly quickly. Success from the viewpoint of the hemlocks might be a long time in coming. After all, our lives are a blip in the lives of a hemlock forest.