WHERE WOULD YOU GO TO AWAIT THE END OF THE WORLD?

WHERE WOULD YOU GO TO AWAIT THE END OF THE WORLD?

If you knew the world was going to end, where would you go to spend those final hours? I am sure everyone already knows about the imminent end of the world supposedly foretold by the ancient Maya. It’s not going to happen, of course, but Steve Stephens, a reporter with the Columbus Dispatch, called me a week or so ago to ask me if there was any special place where I’d want to go to await an apocalypse. My answer, along with the answers of several other Columbus-area residents, appears in today’s Dispatch. It was a tongue-in-cheek question, but it was interesting to think about. My first thought was that as long as I was with my family, the place wouldn’t matter all that much. But that was missing the point of Stephens’ question, which pre-supposed that your family and close friends would be with you. I considered the spectacular ancient Native American sites to which I have a special personal connection, such as Newark’s Great Circle or Serpent Mound, but on further reflection a more natural setting somehow seemed more appropriate. The Ohio Historical Society has a few stellar natural sites, such as Cedar Bog and Wahkeena Nature Preserve, but Blackhand Gorge, Ohio’s Grand Canyon, has a grandeur that is rare for Ohio and it’s close to my home. So, as long as my family agreed, that’s where I think I’d go to await the end of the world. So, where would you go? 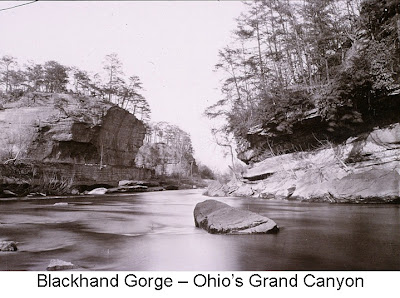