When the Green New Deal resolution was introduced in Congress in 2019, the plan immediately became a hot button issue, generating controversy as well as attacks from political opponents. The Green New Deal – which basically lays out a plan for taking on climate change through a series of bold proposals that address a wide range of environmental and social issues – is based closely on the multi-pronged approach of the New Deal of the 1930s. The New Deal was a series of economic, financial and social reforms established by administration of Democratic President Franklin D. Roosevelt to counter the Great Depression. It included a myriad of public works projects, from support for writers and artists to massive construction efforts that brought electricity to rural areas and built dams for flood control.

Parallels between the proposed Green New Deal and the “original” New Deal don’t end with organizational structure: The New Deal of the 1930s was also highly controversial and politically charged. To this day, the need for and the success of the New Deal remains a subject of debate among economists, historians and politicians. That said, there were successful programs under the New Deal that exceeded expectations, showing results that radically altered life in the United States for the better, examples being the Rural Electrification Administration, the Tennessee Valley Authority, the Public Works Administration, the Social Security Administration, and the Civilian Conservation Corps.

Of all the programs the Roosevelt Administration established with the New Deal, the Civilian Conservation Corps (CCC) can be seen as a direct ascendant to the Green New Deal; it also happened to be resoundingly popular with the public at the time. Established in 1933, the CCC was a public relief program intended to improve public lands and protect natural resources through conservation work. It created much needed jobs, education, training and money for unemployed young men who were put to work on public lands and in state parks. They planted trees and re-seeded the land; they worked in soil conservation and fire prevention; they built dams, campsites and access roads; they created wildlife refuges and fisheries.

The CCC established work camps on public and state lands to house, feed and provide education and social activities to the hundreds of thousands of corpsmen during their time of service. Organized in a military-fashion, with military reserve officers in command, there were almost 3000 work camps spread among the 48 states and the U.S. territories. Ohio was no exception, with camps located around the state. According to a period Works Project Administration pamphlet, the camps in Ohio were mostly involved in the protection, restoration and improvement of forests and parks as well as soil conservation and drainage projects on state and private lands.

Young men from around Ohio who enrolled in the CCC came to these camps to work together in the common cause of conservation, regardless of skill, education or social background. Two men representative of the young Ohioans who signed up with the CCC are featured in collections found at the Archives Library of the Ohio History Center. Roy Udall Clay and Stephen Niznok might’ve come from very different social and geographical backgrounds, but they walked a similar path that led them to the CCC camps and from there into military service as the country prepared for World War II.  However, the two Ohioans were destined for very different fates. Roy Clay was born in Smyrna, Ohio, in 1912. Raised in Harrison County, Clay participated in 4-H Club, earning a scholarship to the College of Agriculture at the Ohio State University. While at OSU, he served in the ROTC and in 1934, commissioned as a 2nd Lieutenant in the Army Field Artillery Reserve, 35th Regiment. That same year, he took a job through the Ohio Department of Forestry to work at the CCC camp located in Jackson, Ohio. As a commissioned officer in the Army, Clay joined the camp administration as a technical service staff member.

We know this because of an unpublished autobiography titled TINSTAFFL (“There Is No Such Thing as a Free Free Lunch”) that Clay wrote in 1979. Donated to the Archives Library of the Ohio History Center by his daughter in 2008, the manuscript not only recounts events of Clay’s life from childhood through retirement, it also documents the times as well, providing a personal narrative of the turbulent years of the 20th Century.

When Clay writes about his experiences while employed by the CCC, his perspective of the camps comes from that of a staff member, so he dedicates much of the chapter on the CCC to the bureaucracy of running a camp. Nonetheless, Clay’s descriptions of the overall operations of the camps provide invaluable insight into the day-to-day world of the CCC.  For example, in this excerpt from his autobiography, Clay provides a snapshot of life at Camp Jackson:

Our work at Jackson consisted of soil erosion control (small wood dams to control runoff), tree planting, wood-lot improvement and fire-fighting…My work crew consisted of 25 CCC enrollees with one leader and one assistant leader. We traveled by stake and platform truck, with canvas top, wooden benches for seats, and a large tool box…My crew worked in the eastern portion of Jackson County. It seems that during the spring of the year we had a forest fire about midnight every Saturday night. As a matter of interest, a CCC enrollee received $30.00 per month - $5.00 at the pay table and $25.00 by allotment to his parents. (“TINSTAFFL,” page 19; MSS 1536, Ohio History Connection)

From 1935 until June of 1941, Roy Clay was assigned to different CCC camps in Ohio, including New Lexington, London, Elyria, Coshocton, and Mansfield. During that time, he rose in title from junior foreman to commanding officer. When he became the commanding officer at Vandalia in 1938 (Vandalia was a segregated camp with African American enrollees), Clay was a 1st Lieutenant and serving on active military duty. In June of 1941, Clay was sent to Fort Jackson in South Carolina, effectively ending his time in the CCC as he transitioned to full service in the army. Stephen Niznok, born in 1918, was the son of immigrants and raised in Cleveland, in a working-class neighborhood near Lincoln Park. Like Clay, Stephen Niznok was in the CCC in 1934, but unlike Clay, not as staff or a member of the armed services.  Niznok’s experience in the CCC was more typical of the thousands of men who joined the Corps seeking meaningful work during the Depression, that of a corpsman. After enrollment, Niznok was posted to Bear Creek, a camp established in Shawnee State Forest (now Shawnee National Forest), located in Scioto County.

Unfortunately, we do not know as much about Stephen Niznok as we do Roy Clay. We first learned about him from a collection the Ohio History Connection received in 2019, the Marie (Niznok) McElroy collection, donated by her estate. McElroy was married to Mark McElroy, a Democratic politician from Cleveland, who served as Attorney General of Ohio during the DiSalle administration. Marie’s collection is a treasure trove of family and travel photographs and slides, correspondence, political papers and more. As Marie was the younger sister of Stephen, the collection contains items related to him. Of particular note is a photograph-filled scrapbook that he compiled documenting his CCC service at Bear Creek, Camp Preble and other sites in the 1930s. The photographs are remarkable in their depictions of daily camp life, from work sites, construction scenes and camp buildings to recreational activities, mealtimes and high jinks among the corps members. In many ways, they bring to life and add color to the descriptions of camp structure, duty and life that Roy Clay describes in his manuscript.

The work at Bear Creek included construction of the Bear Creek dam and a new Forest Experiment Station, as well as the building of access roads. Photographs of almost every step of construction of the dam are included in Niznok’s scrapbook, photographs that demonstrate the intense physical labor that the corpsmen were engaged in while serving in the CCC.  Today, the site of the CCC camp is home to Bear Creek Horse Camp.

As a budding career military man, Roy Clay was in training at Fort Jackson with the 43rd Field Artillery when the attack on Pearl Harbor brought the country fully into WW2. Clay would serve with distinction in the European Theater as an officer with the 275th Armored Field Artillery Battalion, seeing action in the Battle of the Bulge and campaigns including Ardennes-Alsace, Northern France and the Rhineland.  Clay retired from the Army as a Lieutenant Colonel in 1967. He and his family eventually settled in Boiling Springs, PA, and Clay retired from his civilian work in 1979.

By 1941, Stephen Niznok was back home in Cleveland. Possibly influenced by the experience of being based for a time at a temporary CCC camp set up at Patterson Field (now the site of Wright-Patterson Air Force Base), he enlisted in the United States Army Air Force on May 25th, 1942. Attached as a Staff Sergeant to the 68th Bomb Squadron, 44th Bomb Group stationed in Benina, Libya, Noznik was a crewman on a B-24 Liberator bomber. On July 2nd, 1943, the aircraft was shot down by a German fighter plane while on a mission to Lecce, Italy. There were no survivors. Niznok was post humously awarded numerous commendations, including a Purple Heart, which is part of the Marie McElroy collection held by the Ohio History Connection. Roy Clay and Stephen Niznok were but two of the thousands of Ohioans who were part of the Civilian Conservation Corps from 1933 to 1942. As such, they are representative of how the CCC changed the lives of young Ohio men by providing not just much needed jobs during the Great Depression, but also giving them meaningful work, work that gave back to their fellow citizens, work that was for the betterment of their state and country, work that looked to the future, ensuring that generations to come would benefit from their labors.

The New Deal might remain forever controversial and unnecessary “big government” in some quarters, but its impact on the country cannot be diminished. The boldness and success of the various programs of the New Deal stabilized the country at its time of greatest need. In its size and scope, the New Deal arguably prepared the country for the coming war. By mobilizing its citizens to combat the nation’s ills, by uniting the people in common cause, by instilling a sense of duty across society, the New Deal brought the country up to strength, in a sense, just in time for the fight against fascism. 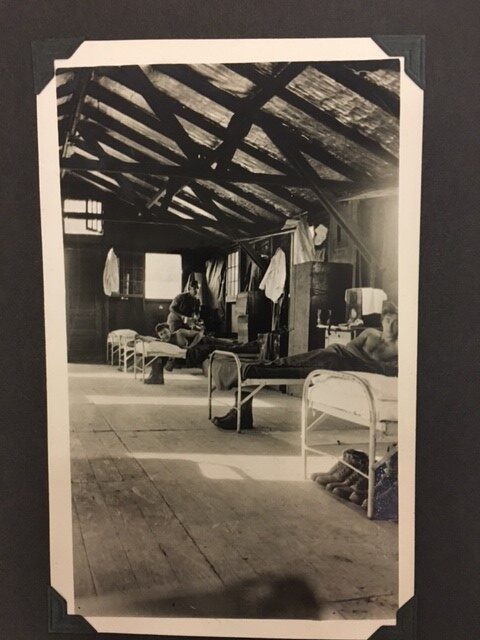 And the Civilian Conservation Corps, in particular, served the country well in the run up to war. A much-needed shot of structure and discipline, the CCC helped to strengthen the collective will of the young men of the work camps, many of whom went on to further serve the country in the armed forces during WW2. Men like Roy Clay, who took the leadership skills he forged in the CCC camps of Ohio and led men on the battlefields of Europe. And men like Stephen Niznok, who after working to ensure that future generations could enjoy the state and national parks of Ohio, gave his own life in service to his country in the skies over Italy.