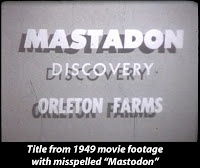 More than 63 years ago, in November of 1949, some workmen at the Orleton Farms in Madison County were installing drain tile and probing with an iron rod to locate a plugged drain. The drain eventually got fixed but only after the excitement of a new mastodon skeleton and its excavation settled back down to everyday life on the farm. 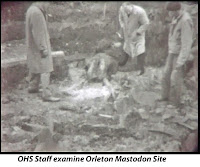 Finding a mastodon is always exciting, even though they have been found in two-thirds of Ohio counties probably representing over 200 finds. They are exciting because mastodons are extinct, and their bones are huge! Of course, some of those finds are only a few bones, and some are a single tooth. This was an extensive find with many, many bones.

The find was reported to the staff at the Ohio Historical Society, and the bones were recovered by a team including Ray Baby, Robert Goslin, Ed Thomas and others. Several other experts were brought in to assist in the interpretation of the bones, and final result was the publication of five separate articles in the January, 1952 issue of the Ohio Journal of Science (Volume 51 No.1). Ed Thomas summarized the find, Richard Goldthwait explored the geological setting, Paul Sears and Kathryn Clisby interpreted the pollen mix, Aurele LaRocque described the snails and other mollusks buried at the same time, and Albert Wood analyzed tooth chew marks found on the bones. In total, 28 pages of professional journal articles explored the aspects of this find. 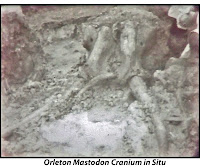 Two interesting details stick out. One was that much of the excavation work was filmed and made into a video. Thanks to good conservation and archival practices, we have that video today. Some of the black and white images included here are stills captured from that video. The quality of the film in 1949 leaves something to be desired, but it did show us some interesting features of the bones as they were being dug up and as they were interpreted later. Besides, a little popcorn and it was a great 20 minutes or so!

In 1970, when OHS left the campus of the Ohio State University, the University requested that we leave a large percentage of our natural history collections on campus. We entered into a long-term loan of roughly “250,000 lots of specimens”. The term “lot” meant, in some cases, a single bird study skin, in other cases it could be a jar of 15 fish fixed in formalin and preserved in ethanol. Among those specimens were some of our Pleistocene mammal specimens. Other Pleistocene bones were brought to our then new museum at 17th Avenue and I-71, where they continue to be a highlight.

Last year Dr. Angelika Nelson, curator of the Tetrapod collections at the OSU Museum of Biological Diversity, realized that she was running out of space. She urgently needed more space for their birds and mammals. She also realized that virtually no one was using the Pleistocene specimens at her museum and they might be better used elsewhere. After contacting OHS and Dale Gnidovec, Curator of the Orton Geological Museum at OSU, she urged us to transfer the loan of the Orleton Mastodon bones to Orton. Dale was enthusiastic and eager have some of this material available at Orton. 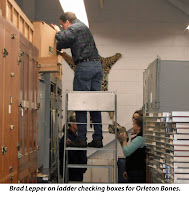 So early in January a team gathered to inventory the bones of the Orleton Mastodon, label them with catalog numbers, and transfer them on loan to the Orton museum. The team included Dale Gnidovec from Orton along with OHS staff members Brad Lepper, Linda Pansing, Bill Pickard, Bob Glotzhober, with OHS registrar Lesley Poling and intern Emily Riggins. 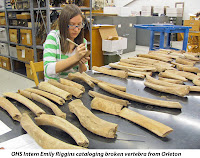 The inventory work proved to be a much larger task than any of us had anticipated. Bones were in boxes and boxes and still more boxes. They were covered with 60 some years of dust and dirt, and less than well organized. When all was said and done, we labeled and re-boxed 24 museum boxes of bones. 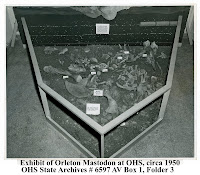 Oh! I forgot to mention the second interesting detail reported in the 1952 journal articles. Ed Thomas and others hypothesized that the small pond (in 1952 only a wet spot in the field) had attracted many animals to drink both before and after the Orleton Mastodon died. As a result, they further presumed, other mastodons likely trampled the bones of the Orleton Mastodon as many were broken. Some of our boxes now have labels like: “200 +/- Cranial Fragments”, or “100 Vertebral Fragments”. And we meticulously counted and labeled most of those fragments (some were too small to label and likely to break more just in handling). In all they totaled 2,417 fragments with a few nearly whole bones and teeth.

The outcome of the long days dirty work–we have a much better inventory of all the bones, and greatly improved labeling and record keeping. Plus, the Orton Geological Museum has them available for research and exhibit. That loan is small payment and a fitting trade as we have had their Conway Mastodon skeleton on exhibit here at the Ohio Historical Society. 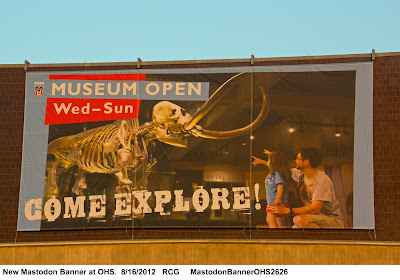