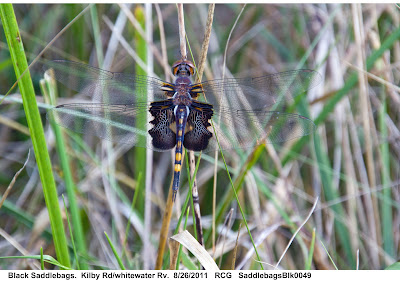 Photo of Black Saddlebags–one of several species of dragonflies considered to be migratory.

Documentation that several species of dragonflies migrate sometimes hundreds or even thousands of kilometers is building. I wrote briefly about this subject back on March 19, 2012.

As noted in that article, there is a huge volume of information about dragonfly migration that we just simply do not know. The Xerxes Society has formed a coalition of people interested in studying dragonfly migration called Migratory Dragonfly Partnership. As part of this partnership, they are putting on a series of workshops for citizen scientists interested in aiding the research. Last summer I contacted the folks at the Migratory Dragonfly Partnership, asking if we could help host one of those workshops here in Ohio. Stay tuned on that–decisions have not yet been made.

On their website, they post a link to a new summary article on what we know about dragonfly migration. It is authored by Michael L. May from Rutgers University who has studied dragonflies and dragonfly migration for many years. The article, A critical overview of progress in studies of migration of dragonflies (Odonata: Anisoptera), with an emphasis on North America is published online and available to everyone here.

Read it, enjoy and wonder at these amazing animals!