Finding a Saber-tooth Cat in Ohio? 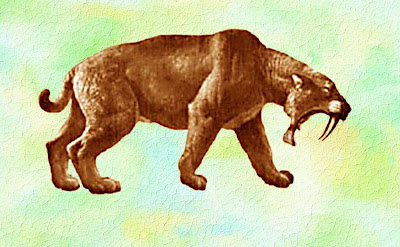 In his regular column for the Columbus Dispatch, on January 22nd John Switzer discussed the potential for finding a fossil of the Saber-toothed Cat in Ohio. He cited this huge predator with its canine teeth 9 inches long as the “holy grail of all Ice Age animals.” He interviewed Dale Gnidovec, curator of the OSU Orton Geological Museum, who said “I think we will eventually find the cat’s remains in Ohio.”

Almost everyone is familiar with the Saber-tooth Cat–more specifically known to science as Smilodon fatalis. The genus, Smilodon, comes from the Greek words for chisel or blade plus tooth and the species name, fatalis, from the Latin for deadly. Hence literally the scientific name means “deadly blade tooth”. The canines are relatively thin in cross-section and serrated on the inside edge. Some paleontologists think they used these to slash at the soft under-belly of baby mammoths and mastodons eviscerating them and then quickly getting out of the way until they died from their wounds. It does not sound like much fun for the victim!

While roughly the height and length of an African Lion, Smilodons were more massive in build and would generally outweigh a lion. There are various reports of African Lions as large as 572 to even 690 pounds but most reliable sources for wild lions (as opposed to zoo lions) give an average of 265 to 420 pounds. The Saber-tooth cat was reported to weigh in at as much as 750 pounds–so they were really big and powerful.

Why No Ohio Finds?

But with such massive bodies and impressive looking canines why have they not been found in Ohio? For that matter, they are actually quite rare everywhere in the fossil record. Wait! What about the LaBrea Tar Pits where they have dug up more than 2,500 individuals of these animals? That hardly sounds rare! In fact, however, when you look at the time-span of fossils in the LaBrea Tar Pits, it turns out that fossils of the Smilodon were left behind only once every 11 years. In the rest of its range, they are truly rare–with only one to a single handful of finds in most states, plus a number of states like Ohio without any records.

The answer as to why Smilodon fossils are so rare is quite simple once you hear it. First, all fossils of Pleistocene mammals are quite rare compared to the number of animals that lived in any one area over the thousands of years of the Ice Age. In order to survive as fossils, they have to become buried fairly quickly like in lake sediments or a bog, or (if you are including Siberia and Alaska) frozen sediments or actual ice. When most animals die on dry land, their flesh is consumed and the bones are scattered by both predators and scavengers. Then the sun bleaches the bones making them brittle, followed by freeze-thaw cycles that break them down further. Furthermore, what bones the scavengers dont destroy, rodents chew on the bones to get the calcium so very little survives for more than two or three years. Most Pleistocene fossils found today are discovered buried in muck where they have laid protected from the elements, from scavengers and rodents. Obviously, only a small fraction of animals that died were left in such favorable conditions for preservation. 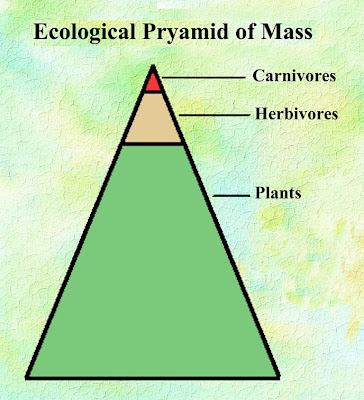 Add to the difficulty of creating a fossil in the first place is the fact that Smilodon are large predators at the very top of the food chain. There is a graphic ecological principle referred to as the pyramid of mass. You note that on the simple one shown here we display three basic levels referred to as trophic levels. They represent the loss of energy transferred from one level to the next. There is a tremendous amount of energy loss from one level to another typically 90% of the energy available is lost. So, it takes 10,000 pounds of plants to support 1,000 pounds of an herbivore with 90% or 9,000 pounds worth of energy burned up in digestion, movement, growth and other processes. Then those 1,000 pounds of herbivore can support only 100 pounds of the carnivore that eats it. So to support an entire pride of saber-tooth cats it takes a lot of mastodons and mammoths. As a result, in a living system the apex predators are quite scarce. Add up the relatively low numbers of top predators with difficulty of preserving a fossil, plus the luck of finding those fossils that survive the thousands of years after extinction and you can see that it takes a lot of luck to find the fossil remains of a 700 pound top predator.

But who knows you could be the one to stumble upon that first record ever of a Saber-tooth cat from Ohio! (When you do–give me a call!)