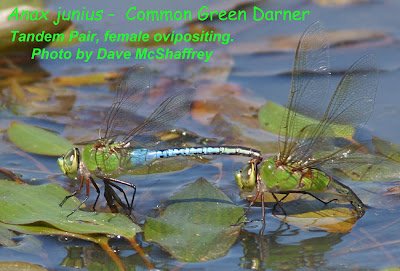 Being an avid fan of dragonflies, and a lover of all things spring, I’m compelled to share this observation. Islay Cowie and Kerr Gibson reported seeing a Common Green Darner on Saturday, March 17th at Blendon Woods Metro Park. This park is on the northeast side of Columbus for those of you technically inclined and not from Ohio put that in Franklin County, Blendon Township at roughly N40° 4.5 and W82° 52.7.Out of 556 records of specimens and photo records in the Ohio Odonata Societys database, the earliest record we have for a Common Green Darner is April 5th. I recall sight records (which we dont record in our database unless backed by a photo or specimen) as early as April 1st but never before any observations from March. It has been a truly mild winter and an early spring this year. In limited field trips over the last two weeks I’ve also noted Spring Beautys blooming and Friday at Leo Petroglyph in Jackson County, a hillside full of Yellow Corydalis. Spring has sprung! Returning to Odonata, Islay’s e-mail alert on the sighting related that “Kerr’s comment — of course it would be a green darner on St. Patrick’s Day.” 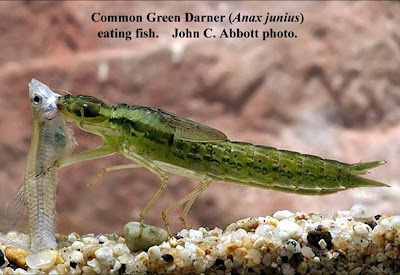 Early sightings of Common Green Darners (Anax junius) are common even if such an early sighting is unique for us in Ohio. They are the result of a mystery yet to be totally solved–the migration of Green Darners and about a dozen other species of dragonflies. In Ohio we appear to have two separate populations of Common Green Darners. One is a resident population, resulting from eggs laid last summer, which hatch and overwinter as larvae. These larvae are typically fairly large during late winter in their last or near last instars (referred to as FO or F1 instars out of about a dozen or so molts they go through as a larva). They may measure an inch long, which is not the largest dragonfly larva, but good sized just the same. These green darner larvae enter spring ready to emerge but do not emerge until the pond they are in becomes much warmer. This emergence is typically in June and their species name, junius, is quite appropriate at this latitude.

The other Ohio population of green darners is derived from individuals that laid eggs last summer, but completed their entire life cycle in a single season, emerged as adult dragonflies in August or early September, then migrated south. At least that is the strongly supported hypothesis that is widely accepted by dragonfly researchers, but not fully proven yet. A few years ago some experiments were done with tiny radio transponders glued to the body of half a dozen green darners. The researchers were able to track them for only about six days but as suspected, they moved south in spurts, resting in-between at various ponds and wetlands. It is hypothesized that these may move all the way to areas along the Gulf Coast. Huge migratory swarms have been noted from time to time one observed by Summit County naturalist Mike Green was estimated to contain between 500,000 and 1,000,000 dragonflies! Again, we presume these breed and lay eggs in southern waters and overwinter in the deep south as larvae. When those southern waters warm enough, they emerge and migrate north.

The fact that our earliest Common Green Darners are all fresh and have un-tattered wings strongly suggests that they did not overwinter as adults, but are freshly emerged adults that moved north from further south where warmer waters allow for earlier spring emergence. Several researchers are seeking more data to more completely understand the story of migration in dragonflies. Regardless of the status of that research or where it leads us, seeing a Common Green Darner in late March or early April is an exciting event and one that tells us that Spring has arrived. Even if we see colder weather over the next month or so, we know the climatic tide has turned!

Watch for these harbingers of spring, and enjoy the season.