The “official” end of the Pleistocene ice age has been set at 10,000 years ago. As the climate warmed it kept warming. About 6,000 to 8,000 years ago the climate of Ohio was much warmer and drier than today, and the region experienced an expansion of the western prairies in what has been called the Prairie Peninsula, or more graphically, the Thousand Year Drought. Perhaps as much as half of Ohio was covered with prairie at that time. Then the climate cooled and became moister, eventually giving us the climate we have today. Prior to 1800, Ohio was 95% forested–but we still had about 1500 square miles of prairie. Today, probably less than 1% of that prairie is left, but many folks have been working to restore sections of Ohio’s prairies. 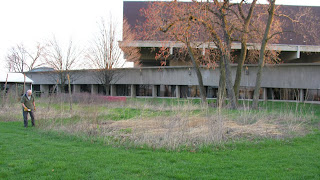 Here at the Ohio History Center, we have a small demonstration prairie in our outdoor Bird Sanctuary and Archaeology Hands-on area. It is only about 1,000 square feet and is the area just in front of me in the photo. In order to survive in Ohio’s moist, cool climate, prairies need to be burned to kill off invading shrubs and trees. Today, we also burn to kill off invading exotic species.

Back in mid-February I started applying for permits thinking I had plenty of time. As you all know Ohio’s spring avalanched down on us with many days of temperatures 25 to 30 degrees above normal. Grass and other plants started greening up sooner than normal! Green grass does not burn well.

We finally got all our permits in order, and four days of dry weather in a row so on Thursday, March 22nd it was Burn Day. Steve Lee of our grounds crew helped me get hoses and rakes and a broom ready in case the fire would break out of the prairie and into the lawn or the American Indian gardens (behind me in the photo above). I phoned Security to alert them, and they called the State Highway Patrol facility, which is just across the road from our prairie. Then I called the Fire Department dispatcher to alert them in case anyone seeing smoke might call it in. Linda Pansing of our Archaeology Unit was present to record the event in these photos. 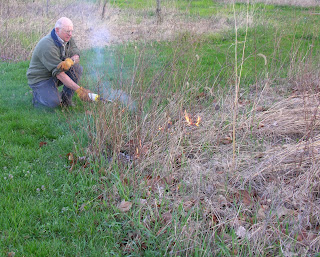 Since our prairie is so small, we have not bothered buying the drip torches that folks who do this more might use. Instead, my little propane map torch from home was used to ignite the dry grass. Unfortunately, the previous nights dew was still present and the fescue lawn grasses invading our small prairie were already quite green. So it took a bit of torch work to get things going good.

We have both Big Blue Stem and a little Indian Grass in our prairie. Eventually, these dry grasses started to take hold. Notice the Highway Patrol parking lot behind the fence across the road and the Highway Patrol car coming up the road. He stopped to check us out! Guess not everyone got the message but Im glad they keep an eye on things! 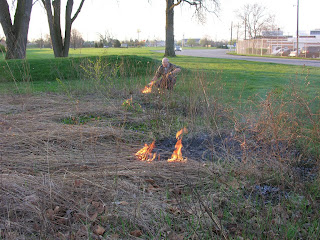 After numerous efforts, the fire finally started act a bit more vigorous. On a good burn, a single match would torch the whole place so this is nothing to be casual about.

Notice the green stems sticking up in the left front of this image. That is an invasive bush honeysuckle. Our fire never got hot enough to really kill this plant or three other honeysuckle seedlings in our small prairie. So the torch was handy again to burn the stem hard and kill it. 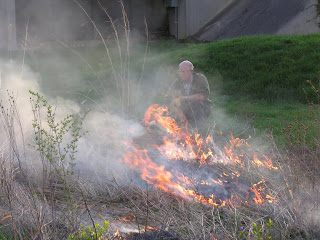 For perhaps one or two minutes only, our fire really took off. While nasty looking here this was a small area. The flames were nothing like the fifteen or twenty foot high flames that can develop in a larger prairie burn. After a short burn, the fire exhausted itself. With the green grass grew around, all around, Steve and I never needed to use the water hose nor the broom or rakes to control the flames. 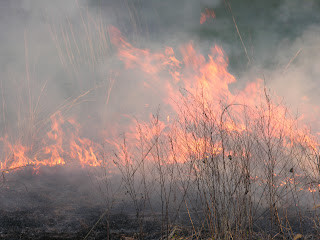 We did carefully walk the entire area to check for any remnant hot spots. As long as we had the hose, we doused the area to be absolutely certain everything was out before we left for other tasks. Prairie grasses and forbs are adapted to fires its part of their evolutionary background. They have deep roots, which will readily send new blades up after the burn. The black ash adds potash back into the soil to further stimulate their growth. 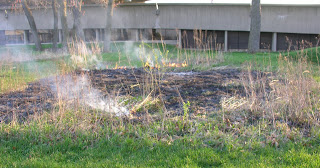 Most of the invasive plants (including native trees and shrubs) do not survive fires–if (unlike ours) they are hot enough. So a good burn every few years really benefits a prairie. We have perhaps 15 acres of prairie that we have restored at Cedar Bog Nature Preserve in Champaign County. In an area like that, the goal would be to burn one fourth to one sixth of the total prairie every year, leaving most of it standing to support over-wintering butterflies and other important insects that make the prairie their home. Unfortunately, too much rain and reductions in staff at OHS and the ODNR (who typically help us with our burns) have prevented us from burning there for several years now. A good prairie burn will be a priority for Cedar Bog next year but obviously with a large prairie it takes a lot of well trained and well equipped workers to keep it both safe for the staff and effective for the prairie. Come visit our little demo prairie at OHC in Columbus and our larger prairies at Cedar Bog. July and August are hot and dry peak conditions to see the prairie flowers in their finest! With prairie grasses six to eight feet high and all sorts of prairie wildflowers mixed in they are sight worth seeing.