April has arrived, or so the calendar declares. It is not uncommon in April to see the very first dragonflies of the season. Last year was unseasonably warm, and here in Ohio we saw the first Green Darners on St. Patricks Day–March 17th! With our much cooler spring this year, I have not yet heard any reports of dragonflies–but it could be soon.

At least it is close enough to “Dragonfly Season” for the press to begin posting articles about these fascinating critters. The April 1st New York Times (April 2nd for the web-based issue) hosted an article with several videos by Natalie Angier, titled “Natures Drone, Pretty and Deadly”. Her article really has a couple of themes reflective on the complexity of these fascinating insects. Her first theme is how voracious they are as predators. She contrasts dragonflies with African Lions, which have a 25 percent success rate in their hunt, and Great White Sharks, which have a 50 percent success rate. Dragonflies typically catch their prey on 95 percent of their attempts! Angier further reports that one Harvard biologist who watched a dragonfly in a laboratory eat 30 flies in a row–and stopped only because the researchers ran out of flies to feed it! 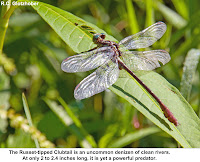 The remainder of the article deals with studies on the nervous system of these proficient predators. Just how can these animals be such great fliers and be so successful in capturing prey? Scientists studying their nervous system and their flight capabilities have often been funded by the military–wanting to know how to create military drones that begin to approach the efficiency and effectiveness of dragonflies. Just imagine a remote controlled drone that is two to four inches long, can fly 30 miles per hour, fly forward, sideways or even backwards, and pivot 360 degrees in three wingbeats!

The insect order Odonata, which includes dragonflies and damselflies, traces it skills back 300 million years to the Carboniferous Period a time before dinosaurs! They may be harmless to people, but for a fly, they are pure dragon!

You can read the full article online here.