Since the last posting you may asked yourself “What has been happening at the Wright State University field school at Fort Ancient this year?” The answer is quite a lot! In the central excavation, Trench B, the field workers have completely examined a section of a pottery feature that encircles a large burned soil feature. In the center of the first picture, just above the gardeners knee cushion, you can see the red burned soil to the upper right and just left of that is thesection of the pottery ring they have excavated. Each piece of pottery was methodically measured in place before being removed to the field laboratory where it was later gently washed, weighed, measured and numbered. Were the pieces remnants of whole pots, or fragments from several pots? Hopefully this is something the students will be able to determine upon further examination this fall. Besides excavating the pottery feature, additional prehistoric trenches and post holes were discovered. Adding to the complexity of an already intricate area. 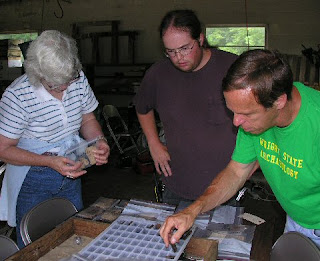 Trench C excavations revealed that it was very differentthan Trench A which was examined last year. Trench A was placed to encounter the large circular geophysical anomaly discovered in 2005. Along with smaller post groupings, Trench A was composed of a main line of large posts, each of which were kept in place by approximately 230 pounds of river rock. It was though that Trench C, which intersects the opposite side of the circular feature, would provide the same results. Surprise! Trench C has something quite different. Yes there are some posts. There are also groups of what appear to be quarried rock. And strips of a possible Hopewellian conglomerate that measures about three inches thick. You can see the alternating dark and light bands running diagonally through the center and bottom of the exposed unit. Very interesting and perplexing! 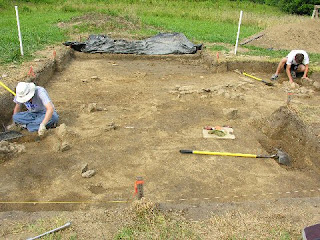 And so closes the second year of the Wright State University field school at Fort Ancient. We want to thank Dr Riordan, the students and volunteers for all of their efforts and look forward to hearing what they discover during the laboratory work this fall. And, as usual, we’ll pass along the updated information to you too!