At the end of June, the Wright State University field school, led by Dr Bob Riordan, launched the second season of their investigation of Moorehead Circle which is located in the North Fort of Fort Ancient. The circle was named after Warren K. Moorehead, the first curator of archaeology for the Ohio Historical Society and the person most responsible for the preservation of the Fort Ancient site as a State Memorial.

This years field school students and volunteers come from various universities and institutions throughout Ohio, Alaska, Colorado, Tennessee and the United Kingdom (just to name a few) and they have been making steady progress despite the recent hot and muggy weather! 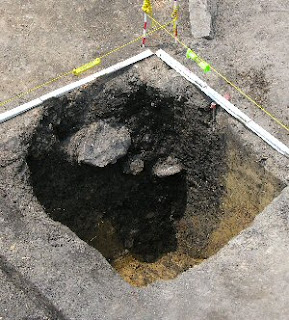 The two areas being investigated this year are Trench B and C.

Trench B is located in the center of the Circle where a large magnetic anomaly was seen in the 2005 geophysical data. It was partially investigated last year yielding many features. This years efforts will concentrate on the hand excavation of specific features and pin pointing the location of each individual object in situ. Picture 1 is of Dr. Riordan surrounded by students looking at a rather large section of a pottery. And picture 2 is of a very nicely defined post hole and fill. 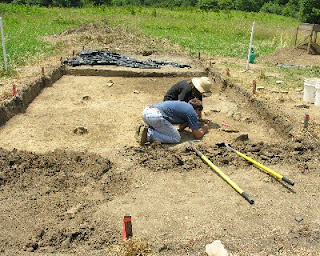 Last years excavation of Trench A revealed that the enclosurewas made of large timbers, each held in place by about 230 lbs or rock. Trench C is situated on the opposite part of the circle to see if the same pattern develops here. Picture 3 shows Riordan and a volunteer reviewing an associated feature in Trench C.

And, of course what would be an archaeological excavation without those tireless people operating the screens looking for artifacts in picture 4? That is hot and dirty work!

For information on how the Moorehead Circle was located go to
http://ohio-archaeology.blogspot.com/2006/06/fort-ancient-discoverywright-state.html

WSU 2006 field school posts can also be viewed at http://www.ohio-archaeology.blogspot.com/ in the June, July and August archives.