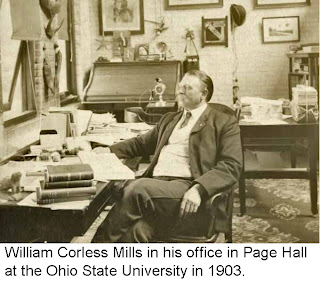 In 1928, the year of the death of William Corless Mills, second Curator of Archaeology and first Director of the Ohio Archaeological and Historical Society (OAHS, now OHS), a new publication began called Museum Echoes. Now the OHS membership newsletter Echoes, the title evoked the sounds within a then fifteen year old building, now known as Sullivant Hall on High Street, but built in 1913 as the Ohio State Museum. The structure, its collections and archaeological archive, and the growth of the OAHS as a strong and vibrant institution is due in no small part to the work of William C. Mills. Mills’ Archeological Atlas of Ohio, published in 1914 and well known to scholars as his masterwork, probably would have come out a few years earlier were it not for the priority of the Museum Building; like much of Mills efforts, he built on work begun by others, but those labors were made complete and brought into public view and wider understanding through the managerial skill and political adeptness of this nearly accidental archaeologist. 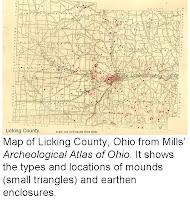 When Mills met Warren Moorehead, OAHS first Curator of archaeology, the new assistant curator was six years older than his superior, having been trained as a pharmacist with a smattering of medical training, working in Kansas and a number of small towns around Ohio. The work of a druggest didn’t look like a real calling for him, but he did serve as secretary of the Newcomerstown archaeological society, where his reports on local discoveries came to the attention of A. A. Graham, secretary of the OAHS. Shortly afterwards, in 1897, Mills came back to the Ohio State University where he had begun a course of study sixteen years before, interrupted by his decision to try pharmacy college in Cincinnati, and marriage to Olive Buxton in 1885. In 1898, 38 years old, Mills received his Bachelor of Science in horticulture and forestry, began working in Orton Hall with Moorehead as assistant curator, and quickly found himself in charge of the nascent collections and operations as Moorehead went to the desert southwest on an extended leave to treat his pulmonary tuberculosis.

This period of leave ended with Mooreheads resignation, and the executive committee of the society offered the job to Mills, which he accepted. Three years later, at the excavation of the Adena Mound in Chillicothe, Mills would be responsible for discovering the Adena Effigy Pipe, a rare piece of figurative and functional art which is one of the great treasures of Ohio, and was a symbol to Mills of the importance of his work in archaeology for the rest of his life.

In 1902, Mills earned a Master of Science degree from Ohio State, and directed the moving of the collections and archives to Page Hall in the following year. But through the remaining decades of William Corless Mills life, he would not restrict himself to any one subject. He established the Department of Natural History of the OAHS, and was well known for his skill in ornithology and horticulture, active in a number of professional societies including the American Association for the Advancement of Science, American Anthropological Society, American Ethnological Society and the American Ornithological Union (among many other awards & memberships). All this, while supervising digs at sites as varied as Tremper Mound, with its famous cache of effigy pipes, and Seip Conjoined Mound. His work at those sites, as well as the Harness and Baum Works, were always quickly and fully published in the pages of the OAHS quarterly and annual reports.

For both Moorehead and Mills, the major part of their salary was actually through Ohio State as both teacher of classes and curator for collections on OSU’s behalf, a tangled set of loyalties and obligations that began to be unwound with the 1921 creation of the position Director of the Museum for OAHS, with the executive committee stepping back into a more traditional role as a governing board of trustees. Mills was the first Director of the OAHS, leaving the original position of Curator of Archaeology open for his assistant, as he had succeeded Moorehead, and Henry Shetrone became the third holder of that post. An intriguing footnote is that apparently, during his early days holding multiple roles both on behalf of the society and with the university, he was president and treasurer of the Ohio State Athletic Association. When he showed that the program was operating in a major deficit situation, the association asked Mills to fix things, which he answered could only be done if he be given complete management of all athletics – football, basketball, baseball and track work. They did so, and in one year this early athletic director of Ohio State sports turned a $3,000 deficit into a $8,500 surplus! It had to be that same kind of astute understanding of people and processes that worked for Mills to get both the State legislature and legendary OSU President William Oxley Thompson to work together to build the Museum Building on High Street, starting in 1913, with the next major wing added in 1926. (In 1970, OHS moved to their current home near the fairgrounds, and the building was given to OSU and renamed Sullivant Hall.)

I find myself sorry that the Museum was never named Mills Hall before the handover, because in many ways, that’s who built both the building itself and the collections within it as well as shaping the early outline of the OAHS as an organization. Those departments still serve the same scientific and educational purposes today which so caught the interest and attention of William Corless Mills in the 1890s. The Columbus Dispatch rightly wrote in their pages the day after Mills passing: Nothing in nature or in the life of man was without its interest for him. For more information about Mills, check out a tribute published after his death in the Ohio Archaeological and Historical Quarterly Vol. 38, 1928; page 205-219: http://publications.ohiohistory.org/ohstemplate.cfm?action=toc&vol=37