Wild in the City! Part I

As naturalist within a historical museum, I get called upon to rescue birds, bats and bugs that find their way into our buildings and cannot find their back out. Most of these finds are the ones that most people would expect. A starling flies in through the loading dock or an open door. A house mouse sneaks in near the garbage dumpster. Occasionally, these finds are a little more interesting. Big brown bats are common enough in urban environments, and occasionally they find cracks to squeeze into to hibernate. These tend to show up in our buildings in late winter or early spring, when warming weather starts to stir them, and instead of going outward, they go inward. Marlin Perkins I’m not, but usually an insect net captures these critters and (weather permitting) they are released back outside none the worse for wear.

Slightly rarer than the bats are other critters that might be less anticipated. Not all end up inside our buildings, but some interesting ones have. The last week of September this year, I got a phone call from our archaeology staff saying they had cornered a critter, could I please come and get it? They told me it was a snake and being held in the bottom of an empty trash can. One of them joked about the boa constrictor. No one in this crowd was concerned, although I do know some people in some offices would have been frantic. 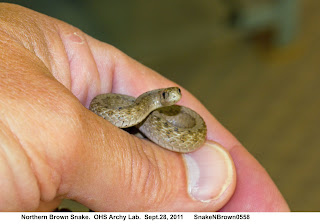 It turns out that this was a Northern Brown Snake (Storeria dekayi) which is a harmless little guy. This one was about 10 inches long, about average for the species which runs from 8 to 12 inches. They seem well adapted to city life eating worms, slugs, snails and small insects.

As you can see, it was quite small!

I should not have been too surprised. We had another one in the archaeology collections building just last year, and Ive pulled them a couple of times from our museum back hallway near emergency exit doors. On one sunny recent afternoon after work, riding my bike on a local bike path, I counted six Northern Brown Snakes out sunning themselves in about six miles of bike path about half of which was not good habitat (dense shade) for a cool afternoon. 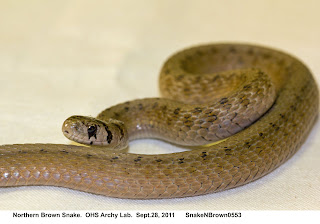 Our collections building complex is totally surrounded by a blacktop parking lot, in the middle of an urban environment. There are only two habitats nearby. One is a narrow stretch of growth along a set of railroad tracks which rail workers kill back on a regular basis. The other is an overgrown, vacant lot, about 1.5 acres, that abuts one side of our property, currently for sale for future business development. This small field is probably the source of our annual influx of brown snakes and has also yielded Deer Mice and Meadow Voles, both of which you generally think of as more rural. While Im sure they dont limit their range to that field we sometimes see hunting Red-tail Hawks. Earlier this week, I almost stepped on a Woodchuck which had its den almost on top of the nearby intersection of a major city street.While well probably never see any endangered species (outside of a Peregrine flying overhead chasing our pigeons) it is amazing how little space some wild critters need to survive. Provide just a little bit of an old abandoned field, and quite a bit of diversity can thrive.

Naturally, not all wildlife can thrive in such a stark environment. We could probably add a few species to our observation list, but it is limited. Many, perhaps most plants and animals need much more space and much more diversified habitat, or a specialized habitat. Those are becoming harder and harder to find. But there is a basic principle operating here, even if somewhat limited in its scope. Give the animal (or plant) enough of the right habitat, and they can survive. We just need to figure out how much space and what are the critical environmental elements that need to be in it. That is what all conservation biology is about. Then we need to be willing to protect enough of that habitat. We need to recognize that diversity of wild plant and animal life is beneficial to us in many, many ways. Nature is tough if we give it a chance!