WHAT BIG TEETH YOU HAVE: A TLINGIT FISH CLUB FROM THE PACIFIC NORTHWEST

WHAT BIG TEETH YOU HAVE: A TLINGIT FISH CLUB FROM THE PACIFIC NORTHWEST 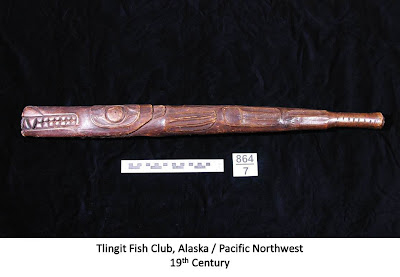 Another very interesting object from the OHS Ethnographic Collections is this very nice example of a Tlingit fish club (object # 864/7). It was originally meant to be part of the EXPLORE exhibit but there is only so much room in the exhibit case. It is part of a collection donated to OHS in 1927 by Dr. F.W. Scheuller.. The Tlingit, whose name means People of the Tide are one of a number of indigenous groups native to the Pacific Northwest region of North America, particularly the coastal areas of British Columbia between Puget Sound and southern Alaska. As can be expected the Tlingit make their living from the sea by fishing and the hunting of marine mammals. The fish club was an important part of the Tlingit fishing kit. It was used to dispatch large salmon and halibut still on the hook before attempting to pull them in their canoes. Halibut in particular can weigh in excess of 100 pounds and the uncontrolled movement of a huge fish in a light canoe could spell disaster for its occupants. The club made of darkly stained Yew wood and probably dates to the late 19th Century. Yew is a dense and tough wood and well suited for such uses. Carved fish clubs are an excellent example of how Tlingit carvers created art out of everyday objects and their styles can range from rather simple to very elaborate depending on a number of cultural factors. This particular object can probably be considered better than average. Aside from the artistic side there is a spiritual side as well. The use of a predatory image like a sea lion or killer whale was believed to bring the predators and power to bear on the fishermans efforts by calling on its spirit to aid him in a successful hunt. These elaborately carved wooden clubs are used instead of stone clubs as the Tlingit believe that killing a fish with a stone would bring on storms and bad weather

The club is robust, about the size of a baseball bat or slightly smaller. It is weighted toward the head and carved in the likeness of a sea lion as represented by a mammalian head with a strong jaw line, large eyes, a short nose with large nostrils and small ears (sea lions have small visible ears, not so for seals). The mouth is portrayed with a double row of large teeth and protruding canines. The pectoral and rear flippers are represented by slightly curved, finger-like carvings on either side of the club behind the head. There is also an indication of the sea lions short tail carved into the top of the club just forward of the handle. The handle itself is cylinder shaped with a slight bulb-like finial and decorated with a numerous small, elliptical chip carvings to improve the grip.