WAS THERE WATER IN THE DITCH AT THE GREAT CIRCLE?

WAS THERE WATER IN THE DITCH AT THE GREAT CIRCLE?

Pioneer Ohio archaeologist Caleb Atwater, author of the earliest published description of the Newark Earthworks, said that when he saw Newark’s Great Circle, “the ditch was half filled with water.” Yet virtually none of the many subsequent archaeologists who studied the site made any mention of there being water in the ditch and there certainly is no water in the ditch anymore.

I recently came across a newspaper account of an archaeological investigation undertaken in 1887 in which an excavator was hired by the Ohio Archaeological and Historical Society (now the Ohio Historical Society) “to sink a hole in the bottom of the moat.” According to the newspaper account, the excavation revealed that the ditch had been lined with “a fine gravel and cobble stone” that presumably would have enabled it to hold water. Unfortunately, the results of this excavation were never published formally and I have been unable to find any field notes or other records in the OHS archives that would allow this account to be substantiated. (For whatever reason, I don’t take it for granted that everything published in a newspaper is an established fact.)

The interior ditch is an important element of the architecture of the Great Circle. None of the other major earthworks at Newark had one, so the builders didn’t need to dig a ditch in order to build an enclosure. So they made a conscious decision to put a ditch inside the Great Circle. It must have been important and one reason for it may have been to create a barrier of water appropriate for certain kinds of ceremonies that the Hopewell conducted here and not at the other earthworks. Kenneth Tankersley, archaeologist at the University of Cincinnati, and U.C. graduate student Emily Culver are conducting research at the Great Circle to answer this importantquestion. 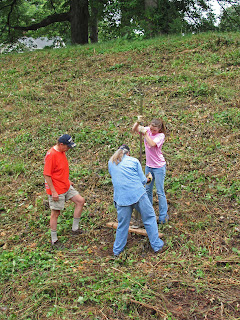 They extracted a series of sediment cores from the ditch to see if they could identify soil layers consistent with water having been present. Culver reported the preliminary results of these investigations in her Masters thesis. According to Culver, there is evidence for an “anthropogenic [human-made] buried soil placed as a ditch lining” at a depth of between 1.3 and 1.5 m below the current surface. X-ray diffraction analysis of the different layers in the soil cores indicates that calcite and other water soluble minerals are absent from the layers above the inferred ditch lining. According to Culver, this is due to the presence of water in the ditch from the time of its construction through the historic era. By the time Atwater visited the site, sometime prior to 1820, several generations of tree’s roots and burrowing animals had punched enough holes in the lining to allow the water to begin to seep out of the ditch. Culver argues that the water-filled ditch may have had both practical and symbolic functions. It may have provided drinking water during a dry climate episode, while serving as a social or religious expression of separation.

Whatever the correct interpretation for why the Hopewell created architectural barriers of both earth and water at some enclosures, knowing that the Great Circle’s ditch did, indeed, once hold water is an important discovery that changes how we understand this amazing site and how it was related to the larger complex of earthworks of which it was but one part and the only part with a water-filled ditch.