Mask are now optional for our visitors and staff. We are continuing our enhanced cleaning protocols, providing hand sanitizing stations, and encouraging good hand hygiene such as proper handwashing. If you are not feeling well on the day of your visit, we ask that you reschedule and visit when you are feeling well again.

Regular Museum Hours-We are open Wed – Sat from 9 am – 4 pm. NAAMCC will present a combination of live and online programming through our Historically Speaking Lecture Series. Register for these free programs to explore African American historical figures and events through presentations from historians, educators and community leaders.Average visit time: Allow 1+ hours

Now through 2024
Explore the many ways that African Americans served our country in the military and on the home front during World War II, through this exhibit of World War II materials from National Afro-American Museum & Cultural Center collections. Discover the art of Charles Alston, commissioned by the Office of War Information to promote the war effort among African Americans, explore stories of the Tuskegee Airmen, the Red Ball Express, the Triple Nickels and Wilberforce-area veterans, and get a look at the impact World War II veterans had on the advances in civil rights that followed the war.

Behind the Mask: Black Power in Comics

Now through 2024
Newly updated and expanded, Behind the Mask: Black Power in Comics explores the painful and triumphant history of African Americans in comic books.  The exhibit delves into the history of black comic book characters who, in the past, were rarely featured as heroes.  Black comic book creators are now emerging to establishing superheroes of their own, reflecting a truer self-identity and cultural pride.

Queens of the Heartland

Now through 2024
The Queens of the Heartland-the exhibit is part of the Ohio History Connection and National Afro-American Museum and Cultural Center Women’s Suffrage Centennial celebration. The exhibit will feature the stories of 30 Ohio African American women who were a significant influence in the Suffrage and Civil Rights Movements. The Queens of the Heartland exhibit will tell the stories of pioneering women through panel text as well as three-dimensional objects. This exhibit will also feature portrait illustrations of these historical figures by New York artist Nichole Washington whose current work focuses on identity and celebrates African American women.

Now through 2022
The National Afro-American Museum and Cultural Center in Wilberforce, Ohio, presents a new exhibit called Rhythm of Revolution-The Transformative Power of Black Art 1619 to the Present. The exhibit maps the visual flow of artistic, cultural, social, and political change in America from 1619 to the present day. Using three-dimensional objects from the NAAMCC collections, Rhythm of Revolution explores how Black artists, religious leaders, and activists worked within their spheres of influence to transform Ohio and our nation. Over time, these known and unknown change agents connected deeply rooted African traditions, interpreted those traditions to attempt to solve contemporary challenges, and worked to pave the way forward into a better future.

What’s in Your Attic? Selections From Our Permanent Collection

Now through 2022
When the National Afro-American Museum and Cultural Center (NAAMCC) opened its doors in 1988, it was on the vanguard by being one of the first national museums dedicated to African American history.  Today, NAAMCC houses over 8,000 artifacts, 600 linear feet of archived materials, and remains a pioneer in preserving and presenting African American history and culture.  Learn more about the stories behind the collections and artifacts of the National Afro-American Museum and Cultural Center.

The National Afro-American Museum & Cultural Center opened to the public in April 1988 and is celebrating its 30th anniversary. The museum is the permanent home of one of the nation’s largest collections of Afro-American materials, with over 9,000 artifacts and artwork, 350 manuscript collections, and thousands of photographs. Items include Alex Haley’s typewriter and his final draft of Roots, a buffalo hide coat worn by a Buffalo Soldier, Gregory Hines’s tap shoes, collections representing the Black Arts Movement of the 1960s, and a vast collection of Black dolls, including the recently donated Lillian Bartok Collection.

NAAMCC currently has two pieces of art on exhibit in the Smithsonian National Museum of African American History and Culture in Washington, D. C. These rare pieces, Let Me Entertain You by Betye Saar and New Orleans Niggah by Barkley L. Hendricks, will be included in their inaugural exhibit Visual Art and the American Experience through 2021. The artwork most frequently requested over the last several years is Freedom Now!  by Reginald Gammon. It was recently in The Color Line exhibit at the Musée du Quai Branly in Paris.  It is now on loan to the Tate Museum in London for their exhibit Soul of a Nation: Art in the Age of Black Power until February 2019. 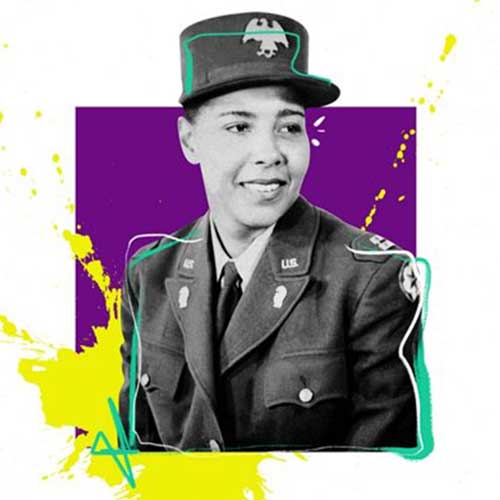 Exhibit • Queens of the Heartland

Take a Virtual Tour of the exhibit using the link below. Explore African American military and civilian service during World War II as a catalyst for the Civil Rights Movement.