THE TOP TEN THINGS WE DON’T KNOW ABOUT OHIO ARCHAEOLOGY

THE TOP TEN THINGS WE DON’T KNOW ABOUT OHIO ARCHAEOLOGY

I’ve wanted to be an archaeologist ever since I was a kid and I vividly remember the fear and frustration I felt that all the important archaeological sites would be discovered before I ever got the chance to be an archaeologist and get in on the fun. It’s easy to look back on that now and laugh, but people that should know better still occasionally claim that eventually science is going to discover everything and put scientists out of work. Actually, it’s been my experience that every new discovery brings with it many new questions that we wouldn’t even have been able to ask before we gained the new insights revealed by the new discovery. As a way of answering the absurd idea that archaeology is an endangered science, I thought I’d present my list of the top ten things we don’t know about Ohio’s ancient past. Such a list inevitably is idiosyncratic and biased. Other archaeologists might come up with very different lists (and I would love to have y’all post your own alternative ideas as comments to this post), but that just goes to prove my point that the questions we can ask of the past are virtually endless. Some of the questions on my list relate to the BIG questions of Archaeology, such as the origins of agriculture and social inequality, and Ohio’s archaeological record can contribute to answering these big questions. Others are more focused on Ohio specifically as you’ll see.

1. When did people first enter Ohio? This question may be impossible to answer, because how would you ever know you had found the absolutely earliest footprint made by a human in Ohio, or on this continent? It is, nevertheless, one of the most important questions in American archaeology, because, if you’re committed to the idea that you have to understand the past in order to understand the present, then the first link of that chain is of fundamental importance for understanding everything that comes after it.

2. What role did humans play in the extinction of the giant mammals of the Pleistocene epoch? We know humans occasionally hunted mammoths and mastodons, but did they kill enough of them in a short enough amount of time to actually drive these species to extinction?

3. What is going on during the Late Paleoindian period? On the Plains, this is a period during which there is a dramatic shift from hunters going after mammoths to hunters chasing herds of bison off of cliffs. Bison were not all that abundant in Ohio at this time, so the Late Paleoindian spear points made and used in Ohio likely were used to hunt deer or elk, but I can’t think of a single well-dated Late Paleoindian site in Ohio to help us understand what was happening during the important transition from Paleoindian to Archaic ways of life. 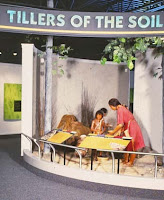 4. Why did the Late Archaic hunting and gathering societies eventually turn their hand to a farming way of life? The answer most definitely is NOT because farming provided an obviously higher quality of life. Hunting and gathering in general provides a healthier diet and the early farmers mostly had to work harder for the same number of calories. Moreover, there tends to be much less social inequality among hunters and gatherers than among early farmers, so it doesn’t look like an obvious choice for Late Archaic folks to be making

5. Why did the Hopewell culture build their enormous earthworks, such as Fort Ancient and the Newark Earthworks? We have a sort of answer in that these wonders of the world clearly served as places of ceremony, including the burial of important people, but why did they need monumental architecture on this amazing scale to conduct these ceremonies?

6. What was the purpose of the Hopewell “Interaction Sphere”? It’s not just trade, because it has long been recognized that for all the prodigious quantities of exotic material coming into Ohio during this period, there is precious little evidence for anything going in the other direction.

7. Why did the Hopewell stop building monumental earthworks and drastically curtail the extent of their “Interaction Sphere”? To some extent, when we know why they built the earthworks in the first place, we will have a better idea for why they may have stopped building them, but maybe it’s more complicated than that.

9. What was the role of warfare in Late Prehistoric societies? Late Prehistoric villages often have walls around them and there are many examples of people buried with arrowheads stuck between their ribs. What was the cause of this conflict and how common was it across Ohio during this period? What role (if any) did warfare play in the rise of socio-cultural complexity?

I could list lots more, but by convention I’ll stick with my top ten. Let me know if you take the time and effort to come up with your own “top ten” list. I’d love to see how they compare.