The Snake’s Tale: How Old Is Serpent Mound?

The Snake’s Tale: How Old Is Serpent Mound?

Over the next year or so a diverse group of researchers led by Dr. Bill Romain will undertake a comprehensive sub-surface survey of Serpent Mound located in southern Ohio. The primary focus of the survey will be to derive a definitive date for the mounds construction as well as locate features such as hearths or refilled pits within the mound or in its immediate vicinity. It is hoped to also gain a better overall understanding of the structure of the landform upon which Serpent Mound was built. The multidisciplinary survey will involve taking a series of soil cores from along both the spine of the mound and adjacent areas coupled with remote sensing surveys using both electrical resistance and ground penetrating radar. In the event any subsurface features are encountered during the coring operation the material will be carefully removed from the soil core and analyzed by an archaeo-botanist for content such as charcoal, seeds and/or other plant remains. For future reference each coring hole will be refilled with a soil of a slightly contrasting color and texture than that of the mound soils. Further investigation of subsurface features or other anomalies detected during the remote sensing surveys will require a separate research proposal. 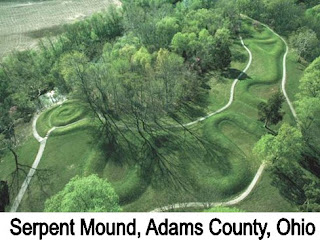 As a matter of historical context, Serpent Mound is located in Adams County, Ohio and is the largest surviving and well documented example of a prehistoric effigy mound in the world. It is composed of a sinuous earthen embankment 411 meters long that includes a 37 meter by 18 meter oval embankment at the northwest end that has been variously described as the eye of the Serpent or an egg in the process of being swallowed. It has also been mentioned that the entire effigy may represent some long ago astronomical event. The effigy is laid out in an overall crescent-like plan on a slightly undulating and sloping narrow bluff above the confluence of East Creek and Ohio Brush Creek in northern Bratton Township. It ranges in height from 1.2 to 1.5 meters and from 6 to 7.6 meters in width at its base. Near the effigy are three previously explored burial mounds. These include a small elliptical shaped mound located approximately 250 meters southwest of the effigy and two circular based conical mounds, one about 9 high and the other about 4 high more immediately adjacent to the Serpent. Serpent Mound was first formally documented in 1848 by Ephraim Squier and Edwin Davis in Ancient Monuments of the Mississippi Valley, the inaugural publicationof the Smithsonian Institution. 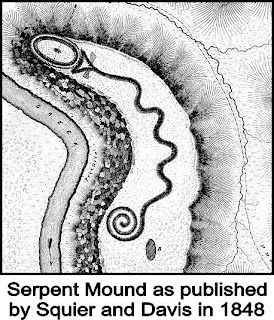 At that time the mound was virtually pristine although there was some indication of indiscriminate digging at various locations around the effigy. In 1859, a tornado passed over the site, uprooting a number of trees growing on the mound and throwing the site into a general state of disarray. Not long afterwards much of the site, including parts of the effigy, began to be plowed for crop cultivation and by the 1880s most of the available open land, including the mound and its surroundings, was used mainly for livestock grazing. The earliest scientific investigations at Serpent Mound were conducted in 1886 by Frederic Ward Putnam, of Harvard University’s Peabody Museum. Putnam first visited Serpent Mound in 1883 and his photographs from then indicate that in just the few decades since the time of Squier and Davis the mound had been reduced appreciably in height although its outlines were still intact and clearly discernable. Upon his return to Serpent Mound in 1886, Putnam found that indiscriminate digging continued to be a problem with the unfilled holes often causing erosional problems. In order to protect what was left of the effigy he successfully led the way for the Peabody Museum to acquire the property in1887 in order to both preserve it and to make it available for future researchers.

Over the next couple of years he conducted systematic investigations of portions of the effigy by excavating a number of shallow trenches across the effigy at several locations. He also investigated the nearby burial mounds and other parts of the surrounding landscape. In summarizing his work he attributed the creation of the effigy to the builders of the two adjacent conical burial mounds, now referred to by archaeologists as the Adena culture (ca 800 BC-AD 100) and for more than 100 years this remained the standard view for the age of Serpent Mound. Putnam also explored the elliptically-shaped burial mound as well as a substantial habitation site southeast of the effigys tail. The elliptical mound as well as materials recovered from the habitation area has since been determined to belong to the Fort Ancient culture (ca AD 1000-1550). After concluding his research, he carefully restored both the effigy and the burial mounds to their original dimensions. The Peabody Museum converted the property into a public park and operated it as such until 1900, when it was deeded to the Ohio Archaeological and Historical Society (now the Ohio Historical Society). 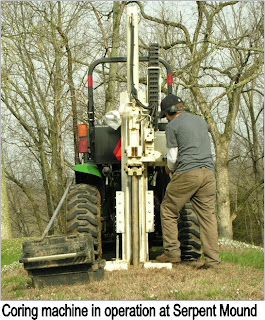 In 1908, an observation tower was built and during the 1930s a museum and other visitor facilities were added by the Civilian Conservation Corps. Serpent Mound was listed as a State Historic Site in Ohio in the 1960s and in the 1970s it was added to the Registry of National Historic Landmarks. In 1991 Robert Fletcher, Terry Cameron and a small crew of professional archaeologists conducted limited excavations into what was thought to be one of Putnam’s old trenches in order to obtain charcoal samples to use for radiocarbon dating. This investigation resulted in radiocarbon dates that indicate the effigy mound was built between 990 and 850 years BP (cal AD 995 and 1265). These dates more precisely link the effigy to the later Fort Ancient component at the site rather than the earlier Adena occupation. Radiocarbon dates on other effigy mounds in eastern North America, including Ohio’s “Alligator” Mound as well as possible stone serpent effigies reinforce these findings. Just when and by whom the Serpent Mound was constructed has been a point of controversy, or so it would seem, from the time the site was first recorded. 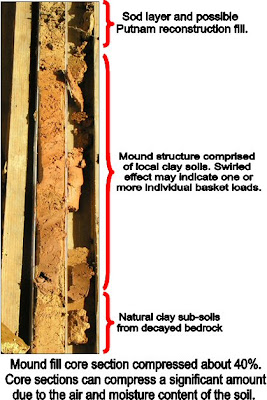 Radiocarbon dates derived by Fletcher et al in the 1990s are the only scientifically obtained dates so far but these are not as widely accepted as it would seem. Among Putnams observations was that in the places he conducted his exploratory excavations the mound structure was underlain by what seemed to be a prepared surface of ash and small cobble stones. Charcoal derived from Putnams ash layer could provide material for a suite of C-14 dates to help determine exactly when the mound was constructed. Unfortunately Putman failed to leave any record of exactly where he made his test excavations in the 1880s and soil coring is the most efficient and non-invasive method of locating undisturbed mound strata. Coring work was scheduled to begin over the weekend of April 9 and 10. It is the most labor intensive phase of the project and will account for most of the time actually in the field.

The coring device is hydraulically operated and mounted to a small tractor. The cores are extracted in 4 foot sections using 2 diameter steel tubes lined with 1.5 plastic sleeves. After the first steel tube is pushed to depth the plastic sleeve liner is removed, capped and labeled as to its location and number in the sequence and most importantly, which end is up. Another plastic liner is inserted into the primary steel tube, another length of pipe added and the entire assembly again pushed to depth. The process is repeated until the desired depth is reached. In some cases, such as testing on the flood plain of a large river or other areas of thick sedimentation, this particular machine is capable of taking a 60 foot or longer core but because the Serpent Mound is constructed almost immediately above bedrock such potential depths aren’t a factor.

What should be considered when working at a site as prominent and as important as the Serpent Mound are the aesthetic disruptions the machinery might cause at the surface. In a cornfield or on a floodplain tire tracks and surface abrasions caused by the operation of the coring machine arent of particular concern. On Saturday April 9 it rained about 1.5 inches leaving the surface somewhat soggy to say the least. The next day was bright and sunny but after taking the first two cores it was plainly evident that the ground was still wet and to proceed further would cause major disruptions to the surface of the mound. Because the overall appearance of the mound was of primary concern, both during and after the project is completed, the coring operation was put on hold until conditions were more conducive to the use of machinery on the surface of the mound. The two cores that were taken still provided some insight as to the nature of the mound construction and to how to proceed when the ground is more stable. 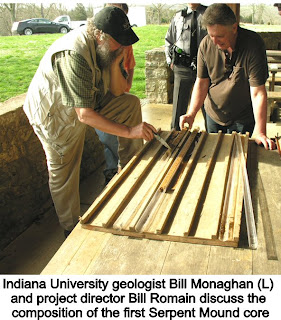 There is an old saying that when dealt lemons make lemonade. In that the ground was too wet for taking cores it was nearly idea for the electrical resistance survey. Electrical resistivity measures how resistant a particular soil structure is to the passage of an electrical current. Solid bedrock is absolutely resistant to the passage of an electrical current. The electrical resistance of other sub-soils varies depending on a number of factors including the level of soil compaction, particle size and soil moisture content. A 70 meter +/- transect line was laid out across the coils of the effigy, covering about half its length. Probes wired together in sequence were inserted into the ground at 1 meter intervals along this line and very low voltage applied. Resistance is measured between the probes and can be combined to create an overall pattern several feet deep. Once the data is collected it is dumped into a computer where it can be processed into a variety of images. The data collection period for this method is relatively long (2 hours or more) but it provides a detailed image of the subsurface along the transect line including how the bedrock and sub-soils interface on that particular strike. 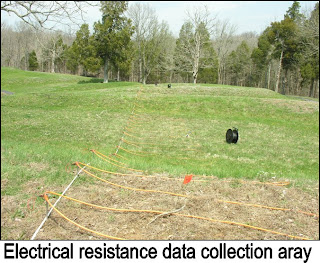 Preliminary results indicate that the bedrock/sub-soil interface along that transect is more undulating than expected with large pockets of weathered bedrock in several places under the mound structure and pockets of different fills within the mound itself. While these are not quite earth shattering revelations every bit of new data contributes to the bigger picture and an overall better understanding of the site. The work is scheduled to continue when the ground conditions are more favorable. In the mean time, please try to find time in your busy schedules to visit Serpent Mound. Its 100 miles from Columbus and centuries removed from everyday life. The site is presently under consideration as a UNESCO World Heritage Site, placing it on par with sites and places as diverse as Stonehenge, Chartres Cathedral, The Great Barrier Reef, The Great Wall of China and other natural and cultural wonders of the world. Its an honor it richly deserves.