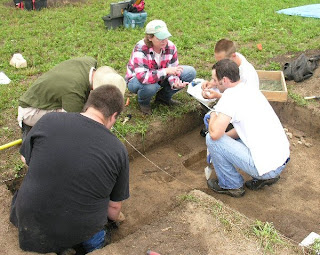 Historic archaeology is often somewhat the reverse of its prehistoric counterpart in that we know what happened and when it happened and often who some of the individuals involved were. The problem at Pickawillany is to figure out where these events took place and that is what we are attempting to do. The tableau played out surrounding the site of Pickawillany only lasted less than 5 years but that short span of time has the distinction of containing perhaps the best documented series of related events in the early history of the State of Ohio as they pushed North America to the very edge of the conflict known as the French and Indian War. For a more detailed description of the history of Pickawillany and the individuals involved please see previous Pickawillany posts on this blog.

Because Pickawillany, as both a Miami Indian town and an English trading enterprise, existed for such a relatively short period of time, items recovered during our excavations provide small snapshots of interactions between Europeans and Native cultures at almost one particular instant of time. That is, of the European material culture being infused into and absorbed by the Native populations of the trans-Allegheny west. To date we have recovered nearly 1500 items from the site of Pickawillany but they are mostly things collected from the plow zone during out metal detector surveys as well as a few isolated surface finds. Our present excavations are the culmination of several years of mapping, metal detecting and comprehensive geophysical work (remote sensing) that included magnetometer, electrical resistance and ground penetrating radar surveys. Gone (hopefully) are the days of seemingly endless test pit excavating looking for something you may or may not be lucky enough to locate. When our data were complied and compared the same relatively small area of our 35 acre site repeatedly showed the best promise, no matter which type of survey was employed. Its just not practical to go out and dig a hole at random hoping to get lucky nor is it sound or legitimate archaeological technique. 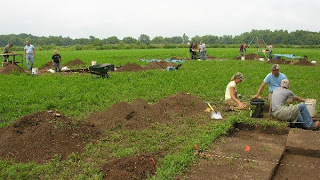 This years work centered on a number of large anomalies located within about 25 meters from one another that were identified during previous magnetometer surveys. These are all within an area where our data seems to indicate that the English traders were active.In the image on the right students can be seen hard at work. Magnetometers, in short, can detect faint, localized disturbances in the earths natural magnetic field that could be caused by anything from a piece of iron in the ground or even a large granite boulder (many igneous rocks have a high iron content) to a buried fire place to a trash pit that had been excavated and refilled. There are microbes living on the surface of the ground that excrete magnetite as a natural process. If soil that had been on the surface becomes pit fill this magnetite residue becomes sealed and can be detected. It should be stated that these instruments, while quite sensitive only detect things as disturbances or anomalies against a neutral background. It still has to be excavated to determine the nature of the anomaly. A fire pit used 250 years ago looks remarkably like a tree stump burned and removed by a farmer early in the 20th century. Before any work was ever done on the ground, a permanent site grid large enough to take in the entire 35 acres of the OHS property (and even areas beyond should the need arise) was put installed as a base for all subsequent work. In theory it is possible to have located something underground at a certain set of coordinates in 2003 and in 2009, based on grid measurements, relocate that grid point within a very minimal margin of error. 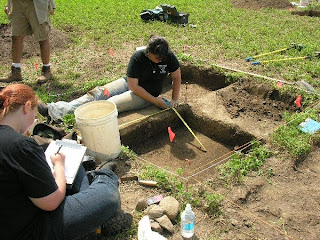 Four areas were selected for excavation this year, based on mostly magnetometer survey results and the plow zone soil above each was removed in a pair of2 meter x 2 meter blocks and excavated a square meter at a time to where the sub-soil was exposed, about 1 foot below the surface as seen on the right. The remote sensing had paid off in that the features were just where we thought they would be, saving several hours if not days of plow zone removal. A shadow of one of the large anomalies can be seen at the end of the measuring tape. Two of the anomalies turned out to be large circular stains about 1.3 1.5 meters in diameter. Adjacent to one of the large stains was a smaller stain, about 35 centimeters in diameter and appeared to be a post mold, that is the remains of a post that had either been burned or decayed away in place. It was surrounded by several soft ball sized rocks, likely chinking stones to hold the post fast in the ground. It was designated as Post Mold #6, and two students were selected to excavate it. Because of its smaller size Post Mold #6 was divided into halves for excavation. By excavating a feature one half at a time any stratigraphy that might become apparent can be recorded in profile through drawings and photographs. Larger features are often divided into quarters for the same reasons. At the left PM#6 can be seen already halved with another large anomaly near by. 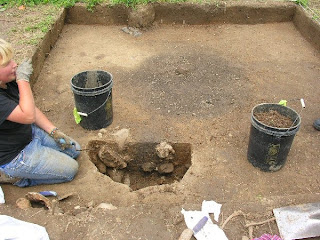 Post Mold #6 turned out to be just that, a post mold. It extended about .5 meters into the sub-soil and the surrounding rocks continued to the bottom of the feature. Taking into consideration that the feature had been sheared off or truncated by plowing, it is very likely that it was originally a much deeper feature, probably a meter or more deep with upwards of 100 pounds of rocks holding a relatively large post in place. This is exactly what would be expected of a flag pole or some type of structural post that would have a lot of stress applied to it. There are references in the journals of both Christopher Gist and William Trent of flags and flag poles at Pickawillany. However, before it is taken for granted that the remains of an English (or French) flag pole had been discovered, please read on. At the bottom of Post Mold #6 was a stone celt or ax (on left)very similar in style to other items recovered in prehistoric Middle Woodland or Hopewell contexts. This would typically date the feature to approximately 2,000 years before present. Flint artifacts discovered on the surface during pedestrian surveys at Pickawillany indicate people were at least sporadically present on that landform for more than 6,000 years so a 2,000 year old feature at Pickawillany is well within the realm of possibility. The question is now whether or not the feature actually dates to the time period as indicated by the artifact or if in fact the artifact was somehow included in a later prehistoric or Pickawillany era feature. There was ample datable charcoal in the fill of the post mold so there should be a definitive answer to that question in due time. These are the sorts of questions that make archaeology interesting. 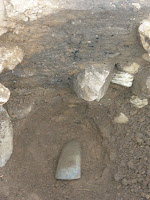 Of the two larger stains, one was selected to be excavated and, designated as Feature #45. As in the case of Post Mold #6 it was mapped as it appeared at the sub- soil interface. A soil probe indicated that it was at least 40 centimeters deep so it was divided into quarters for excavation as described above a 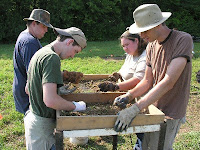 nd because of its size two teams of two students each were assigned to excavate it. While it may seem simple to remove the soil from such a feature it can often take a number of days to do it properly. The fill is removed in levels and carefully screened to recover any small item the excavators might have inadvertently overlooked. Feature #45 turned out to be a quasi-cone shaped pit that extended to about 1.4 meters below the plow zone / sub-soil interface or about 1.9 meters below the surface. The dark organic fill contained quite a few interesting objects including a brass finger ring set with a faceted green glass stone, French style gunflints, brass arrow points (including a very rare stemmed type) and a number of glass and ceramic beads. 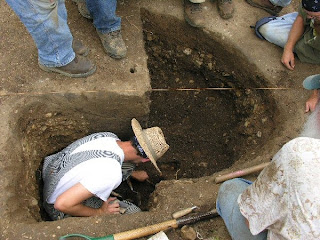 These were intermixed with charcoal fragments,fire cracked rocks and deer bone fragments. Above Seth Cooper is seen carefully removing a gun flint from Feature #45.Just when it appeared that the pit had bottomed out the excavators encountered a layer of ash and burned earth. Below this layer things became very interesting. In loose gravel fill (probably the result of the slumping of subsoil when the pit was open) was a trove of very interesting items that included an iron butt plate for a type C French musket that as a type dates to the early 1700s (below left). Type “C” muskets or fusils were a premium grade over ordinary trade guns and would have been carried by French officers or high status Native Americans. Also recovered wasa large wrought iron latch hook (just like a screen door hook only about 14 inches long), miscellaneous gun lock parts and a brace for and English pack saddle. 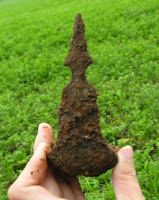 So what to make of Feature #45? At first glance it would appear that it was some sort of earth oven that became a trash pit or perhaps it was always a trash pit in which the iron objects were the first things to be deposited, was used over a period of time to burn things in and was finally filled in with artifact rich soil from the surrounding surface. Its hard to say for certain at present. We do know that a man named Thomas Burney was a blacksmith and gun mechanic in service at Pickawillany and perhaps some of the objects recovered were actually from his bench. Burney escaped the French in their June 21, 1751 attack on Pickawillany and much of what we know about what took place there that day was from his official account. However poor Mr. Burney only lived long enough it seems to get killed a few years later in Braddocks defeat on the Monongahela, July 9, 1755. 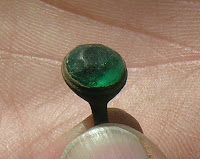 This summer at Pickawillany turned out to be very productive. However, archaeology is a cumulative process in that it is often the case that data compiled one season may only begin to make sense later on as further data are accumulated. Do we know where the traders compound was located? Not yet but it certainly seem as if we are working in that direction. It takes time but good things come to those who wait, or so they say. Because of the relative remoteness of the site public visits are scheduled through Andy Hite, the Piqua Historical Area site manager. This year more than 150 people were able to see what was going on out at our digs and all seemed to be thrilled to be at the site to witness the goings on. It seemed tobe a greatexperience for them to witness objects being unearthedthat belong to a time so far in the past. Also this year volunteers accounted for nearly 100 hours of contributed service toward our project. Volunteers provide valuable efforts in keeping the project moving along. Thanks to Doug Angeloni, Wes Keifer, Katie Roberts and Mike Thornton for their hard work, also to Andy Hite, Rob Cline and everyone else at the Piqua Historical Area for their help and hospitality. In a generous show of appreciation, the Friends of the Piqua Historical Area hosted the students and others to a cook out at the end of the project. If you would like to volunteer for this project next year or for the Ohio Historical Society in general contact Mary Cannon, OHS Volunteer Coordinator at [email protected] 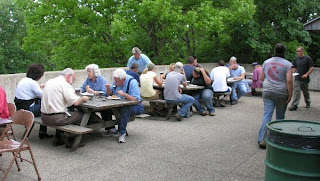