The Quabbin Island Rattlesnake Reintroduction Plan: What you need to know

The Timber Rattlesnake made the national news earlier this year when the proposed reintroduction plan at the uninhabited island of Mt. Zion in Quabbin Reservoir, Massachusetts went viral. As it happened, this story broke just in time for the January-March 2016 issue of Ohio History Connection‘s Timeline magazine, in which retired curator Bob Glotzhober writes about Ohio’s Timber Rattlesnakes.

So what’s the big deal with Quabbin? 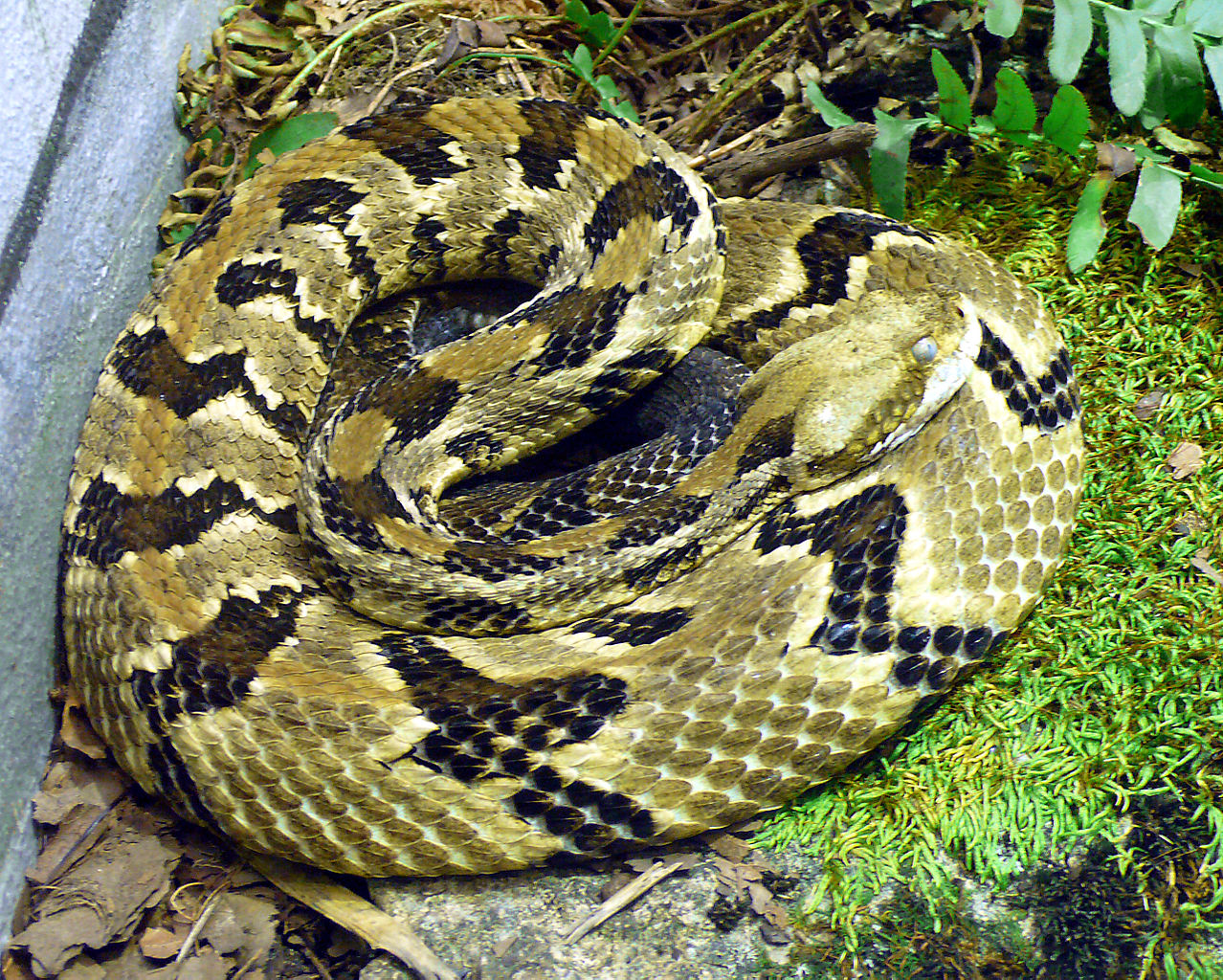 A Timber Rattlesnake waits for prey to pass by.

The Quabbin Island plan was carried forward from the previous administration by snake advocate and Massachusetts Governor, Charlie Baker. The plan has actually been underway for several years, as it first began with the captive breeding of rattlesnakes at the Roger Williams Zoo in Providence, Rhode Island, by conservation-program director Louis Perrotti. This process is known as “head-starting”—breeding a species in captivity and rearing to sub-adulthood before release into its wild habitat to ensure its best chance at survival.

The Quabbin Reservoir reintroduction plan is an attempt to establish Timber Rattlesnakes in at least one location where they can avoid their greatest threat: people.

The Timber Rattlesnake is a shy, retiring snake of rocky outcrops and forested ridges. It has suffered the greatest modern decline of any native reptile in every part of its range—including Ohio—over the last 30 years, and is now extirpated from Maine and nearly gone from New Hampshire. The main driver behind their decline is “direct intentional persecution”, i.e. they are killed deliberately out of “deep-rooted sociological fear.” Road mortality and habitat loss due to development have also taken a toll, along with snake fungal disease, or SFD (see the end of the blog for details).

Somewhat deceiving range map of Timber Rattlesnakes. Their distribution is better described as a smattering of isolated dots within the red area, and they have not been found on Ohio’s Lake Erie islands since the 1960s.

In Massachusetts there are about 200 wild timbers left, scattered among 5 isolated populations—all in places highly frequented by people. Nearly a quarter million people visit the Blue Hills Reservation each year, one of the last refuges of the Timber in Massachusetts. Despite this, there have been no legitimate timber bites in Massachusetts in the last 50 years. In fact, in the Northeast a person is 18 times more likely to be killed by a dog than a venomous snake.

The reintroduction plan is spearheaded by Assistant Director Tom French of the Massachusetts Division of Fisheries and Wildlife (listen to his interview on the subject with NPR here, and visit the official Mass.gov Quabbin project webpage here). The plan is to release one to ten snakes per year over the next decade onto the island after being fitted with radio transmitters so that researchers can study how the snakes are adjusting to their new home.

A Timber basks on warm rocks near a den site.

This is not the first time Quabbin Reservoir has been used to restore an endangered species. It was also the chosen site for Bald Eagle rearing program in the 1980s (which was wildly successful and popular). In the highly unlikely event that these somewhat agoraphobic snakes would choose to abandon cover and swim across open water or traverse the narrow and exposed 1-mile-long causeway connecting the island to the mainland—and exposing themselves to predation by the highly opportunistic resident Bald Eagles—the transmitters will also aid in their recovery.

Ted Williams comments on the uninformed and knee-jerk fear reactions regarding the plan here on The Nature Conservancy’s “Cool Green Science” blog, and highlights the following myths:

Myth: Taxpayer dollars are being wasted to “babysit snakes”.
Facts: The state of Massachusetts allots $150,000/year to Natural Heritage and Endangered Species projects through a federal grant, which works out to about 2 cents per resident per year. A fraction of this 2 cents will be used to pay for the Quabbin island plan. The cost to taxpayers is negligible.

Myth: “We should focus our conservation efforts on areas where the Timber is already located.”
Facts: Most of these areas are state parks, forests, and MassWildlife lands, and are thus already protected. To improve conditions for the rattlesnakes, the best thing to do would be to close these areas to the public. The goal of most state wildlife agencies is to manage natural resources while providing wild places for people to enjoy. Closing these areas to the public would protect the rattlesnakes, but also defeat their purpose, and enrage the public even further.

Myth: “The best place for an endangered species is a controlled setting, like a zoo.”
Facts: An ecosystem is like a Tinkertoy computer, with each piece representing a species. If one piece/species is removed, the computer/ecosystem ceases to function properly. If enough pieces are removed, the whole computer/ecosystem will topple. Although zoos and other captive breeding facilities are critically important for the recovery of imperiled species, the ultimate goal of all propagation projects is to re-establish wild populations in their native range that are self-sustaining (when possible) to restore full functionality to their native ecosystems. The best place for any species is the ecosystem to which they have adapted and evolved.

Myth: The snakes will “breed like crazy” and overrun the island.
Facts: Timbers breed very slowly, only reaching sexual maturity at about 8 years of age. Females only breed once every 3-5 years thereafter, producing less than a dozen babies each time. The mother protects them from would-be predators for their first few weeks of life, until they disperse on their own. Because the young snakes are a perfect snack size, their chances of surviving to adulthood are quite low. Depending on various conditions on the island, the project may fall short of its goal of reaching a population of 150 snakes by 2050, which averages out to about 1 snake per 10 acres of island. Snakes play a key role in the ecosystem by being both predator and prey, and the Timber helps humans by keeping rodent populations in check. Rodents not only infest our granaries and silos, but are also a vector for disease. Rodents are key in the transmission of Lyme, rabies, hantavirus, and bubonic plague (believed to be the cause of the Black Death). Lyme disease is notoriously difficult to diagnose and treat, and rabies is almost always fatal in humans if not detected early. And of course, the Black Death decimated 1/3 of the European population in the mid-1300s. Bubonic plague still exists today on every inhabited continent, with infection rates being highest in developing countries. It is treated with strong antibiotics, but antibiotic resistance has already evolved in some diseases. The Timber and other rodent-eating species are our first line of defense against diseases such as these.

But snakes are now suffering from a plague of their own: snake fungal disease, or SFD. It is very similar to White-nose syndrome (WNS) in bats, in fact it is also caused by a similar soil-living fungus, Ophidiomyces ophiodiicola. Snakes with SFD often have crusty yellowish lesions on their faces and bodies. Like WNS, it kills snakes primarily by changing their behavior. The infection causes snakes to shed more often, suffer from anorexia, and spend more time out in the open where they are vulnerable to predators. If not predated upon they die of exposure, exhaustion, or starvation. It started to show up on the East coast of the United States in 2006, the same year WNS was first detected in a population of bats in New York. Although the fungi appear eerily similar and affect animals that hibernate, it is not known if the two fungi are linked.

It’s clear that snakes need our help now more than ever; however, on May 25 2016, the Massachusetts Senate passed a budget amendment to institute a one-year moratorium on the snake conservation plan. While certainly a snag in the recovery plan and a major bummer for snake advocates, it will give the head-starting snakes more time to grow, and researchers more time to learn more about SFD and its impact on snake populations.

Want to do more to help snakes?