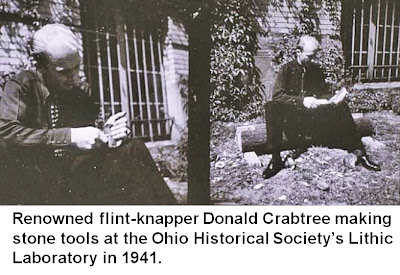 By the late 1930s, the rather small professional archaeological community was staring down mountains of freshly excavated artifacts, the products of New Deal-funded research projects. Projects that had been of unprecedented proportions as far as North American archaeology was concerned. And around this time thoughts were no doubt turning to how to manage (clean, sort, catalog, store) millions of artifacts and moreover how to make some sense out of them.  A letter dated 6th of April 1938 from T.M.N. Lewis, head of archaeological operations for the Tennessee Valley Authority (TVA) (which had undertaken some of the largest excavations of them all), to Richard Morgan, Curator of Archaeology at the Ohio State Museum (now the Ohio Historical Society), highlights this. It also contains one of the first references to what would become the Museums Lithic Laboratory. In the letter, Lewis asks for Morgan to review classification sheets he has enclosed. He wrote:

There are thousands of lithic artifacts to be classified and I would experience a very sad feeling if our committee were to adopt a different terminology after our studies. Four people are being employed in this connection, not including myself, at a cost of around $500 per month, consequently I want to be reasonably certain that we are venturing forth into uncharted waters with the proper accoutrement to enable us to record data with which at least 50% of the profession will be satisfied.

The focus of the majority of the projects undertaken by the New Deal organizations such as the Tennessee Valley Authority (TVA), Civilian Conservations Corps (CCC), and Works Progress Administration (WPA) were prehistoric Native American sites. Camps, villages, burials, ceremonial locations, quarries and workshops yielded an array of stone objects from tools to personal adornment items, known broadly as lithics. Archaeologists recognized that an understanding of the variations of these artifacts across time and space was to be key to unlocking the mysteries of the peoples of North America prior to European contact and settlement. The our committee in Lewiss letter was a reference to the then fledgling Lithic Laboratory, an initiative by the Ohio State Museum to facilitate this understanding. Focused largely on reproducing stone artifacts via experimentation with tools and techniques, what would eventually become a part of the branch of the field known as Experimental Archaeology, among its goals was to create a uniform classification scheme for these artifacts. This was the proper accoutrement to which Lewis was referring. Though the Lithic Laboratory was never directly associated with New Deal Archaeology (the Laboratory was never to be the recipient of any sort of government funding, which contributed to its eventual decline), it is fairly safe to say that it was born of the desire by those in the field to begin to learn from the deluge of artifacts the economic, political, and policy events of the 1930s had inadvertently showered upon them. No more artifacts for artifacts sake, it was time to begin to unravel through meticulous scientific study the cultures and the lifeways of those that had created them.