1939, the year following the founding of the Lithic Laboratory, saw the focus of the nation shift from domestic economic recovery to the outbreak of a war that would eventually envelop much of the northern hemisphere. In a letter from Ohio State Archaeological and Historical Society Director, H. C. Shetrone to Harper Kelley of the MusÃ©e de lHomme in Paris requesting lithic materials, discussed in the previous post on the Laboratory, he alluded to the troubles that were already brewing in Europe: Just now we are much concerned with the status of World Affairs and assume that there is equal or greater anxiety in France.

But the Laboratory continued to execute its purpose of better understanding the past, even as the momentous history of the next several years was simultaneously being written. 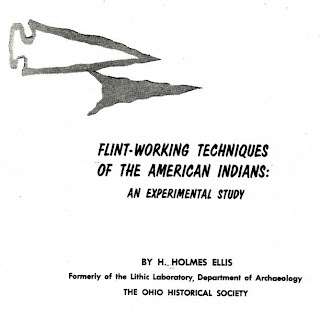 By fairly early in 1939, H. Holmes Ellis had completed his masters thesis for the Ohio State University entitled Flint Working Techniques of the American Indians: An Experimental Study, ultimately the only formal publication resulting from the Laboratorys efforts to better understand the methods used to produce various lithic artifacts. He stated in a letter dated March 14ththat the monograph was ready, but had been delayed in going to the printer due to the ill health of Shetrone who was to write a preface. This seems to suggest that at this point much (though not quite all, see below) of the Laboratorys work in the realm of Experimental Archaeology was considered complete.

The majority of the Laboratorys continued efforts focused on the building of its comparative collection of flint materials from around the country and the world. In April of 1939, the requested shipment of flint from France arrived, and in the summer of the same year H. Holmes Ellis, the Laboratorys Research Associate, took a trip to Indiana, Illinois and Oklahoma to bring back additional specimens.

The ultimate aim [of the comparative collection] is to assist the archaeologist in identifying materials and their specific sources. Such information should throw light upon trade and migration routes of various prehistoric tribes. It should also be of value in indicating cultural relationships and may even furnish additional evidence along chronological lines.

In late 1938, the Lab had acquired a petrographic microscope, for studying thin sections of these samples to better understand their composition and thereby aide in their identification.

Correspondence and other archival materials relating to the Lithic Laboratory are virtually non-existent for 1940. Its not known precisely why, but it is mentioned in the preface that Shetrone eventually wrote for Flint Working Techniques that In July of 1939, the Lithic Laboratory became a division of the Department of Archaeology, R. G. Morgan, Curator, with Mr. Ellis continuing the research as Assistant Curator of the department. The Laboratory more or less ceased to function as a separate entity in July, which corresponded with the end of its initial one-and-a-half year funding period by two Ohio Archaeological and Historical Society officers. The activities of the Laboratory appear to have declined after this point.

In April 1942, however, H. Holmes Ellis compiled an annual report for the period from the previous April through that month detailing a fairly busy year. He even inserted images (literally cut-and-pasted) into the text to illustrate the various accomplishments, giving the report a rather modern blog-post like feel. 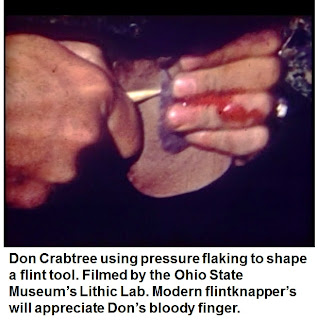 First, under the category of Research, he describes the Labs return to Experiment-al Archaeol-ogy with Don Crabtrees visit as detailed in a previous blog post Don Crabtree at the OHS Lithic Laboratory.

Second, there is a note that the Society for American Archaeology had formed a Committee on Stone Artifact Terminology, which the Lithic Laboratory had been invited to oversee as chair.

Third, Holmes noted that an index of archaeological sites around the state had been kept up to date during the proceeding year with over 100 sites having been added. Included in the report was a 3×5 inch sample site card. These index cards would eventually evolve into two and then ten page Ohio Archaeological Inventory site forms that are used today to record and then plot sites in the Ohio Historic Preservation Offices GIS system, available online to registered users.

Finally, Ellis described fieldwork in the form of the excavation of two mounds, the creation of a prehistoric culture map of Ohio based on archaeological sites with known affiliations, the making of photographic prints of all the Departments archaeology-related negatives, expansion of the Societys archaeological bibliography file, reports written, scientific meetings attended, exhibits assisted with, lectures given, courses taught, radio programs participated in, collections acquired, and cooperation with other departments and institutions.

Ellis concluded his report by stating We can only hope that circumstances will allow that the coming year will be even more fruitful for both the Lithic Laboratory and the Museum.

Unfortunately, circumstances seem not to have allowed this fruitful outcome. By this point, the U.S. already had been drawn into World War II, and later that year Ellis would leave his position at the museum. From the Societys 1943 Annual Report: H. H. Ellis, Assistant Curator of Archaeology, resigned last November to accept a position in war production. His position will not be filled, at least for the present.

Nevertheless, there is still a good deal of the Lithic Laboratorys legacy still present and of use in the Ohio Historical Societys collections today. Beyond the crate of flint from France currently on display in the entry hall of the Ohio History Center, the comparative collection of flint assembled by Shetrone, Morgan and Ellis is intact and has even been supplemented over the years by additional material. This collection is available for the use of researchers.

In 2003, OHS Curator of Archaeology Martha Otto arranged for the collection to be cataloged and this catalog has since been digitized. One goal of the current curators is to make this catalog and selected images available online so that, as Otto hoped, the mission of the Lithic Laboratory, a project that had tremendous potential but that was cut short by World War II, could be revived, at least in a small way.

We may have come a long way in understanding the cultures and lifeways of those that created them, but the study of stone artifacts still has much to contribute to our understanding of the first peoples of North America.