A Case Of and With Excellent Provenance
by guest blogger Erin Claussen
Sometimes when conducting research, if youre really lucky, you get to say, Wow! If that file drawer full of information on the topic at hand had been a snake in the grass Such was the case a couple of weeks ago when such a drawer clearly labeled Lithic Lab surfaced at the OHS collections center (it was more at foot level, than eye level), and the information contained therein, including additional correspondence, financial records and photographs, has helped to fill in even more of the story of the Lithic Laboratory for the Eastern United States. 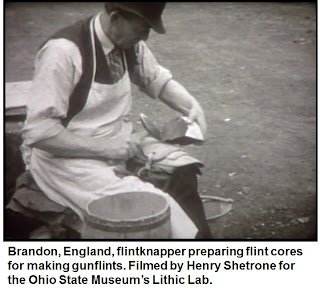 For instance, it verified that Ohio Historical and Archaeo-logical Society Director, H. C. Shetrones trip to Brandon, England to study flint-knapping, discussed in the previous post on the Laboratory, occurred in 1937, prior to the official launching of the Lab. A letter dated February 23rd, 1938 from Shetrone to Mr. Harper Kelley of the MuseÃ© de lHomme, expressing appreciation of your hospitality on the occasion of my visit to Paris last June, clearly indicates that he journeyed to the European continent as well.

In this letter, Shetrone also places a request that would ultimately be a year in fulfillment. “I recall that during my visit with you, you were so kind as to suggest that you might be able to furnish the Laboratory with a few specimens from the Paleolithic in France. We should like particularly a bit of PrÃ«ssigny flint and, if possible, a core and flake of the same material. We should like a piece or two of the raw material for purposes of comparison with other materials in the matter of ‘workability’ if I may coin a term.” 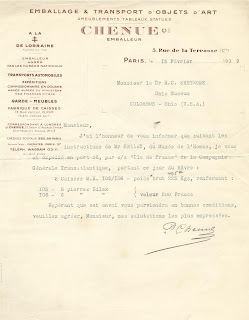 On the 15th of February 1939 a letter was sent to Monsieur le Dr. H. C. Shetrone from Chenue, Emballeur informing of the shipment, per the instructions of Mr. Kelley of the MuseÃ© de lHomme, from Le Havre, France on the s/s Ile de France of the company GÃ©nÃ©rale Transatlantique two cases silex stone, weighing a total of 225 kilograms and valued at 500 francs. It seems in the end Mr. Kelley went above and beyond fulfilling Shetrones request, as the material contained in these two cases was all unworked flint nodules. The shipment arrived in New York on the 27th of February according to another letter from the Halperin Shipping Co., though according to them it arrived on the SS President Roosevelt, and after some effort was expended to settle charges and customs dues, ongoing in March, it probably arrived in Columbus in early April 1938.

It is assumed that the contents of one of the two cases was used in the course of the Lithic Labs experimentation or perhaps shared among other institutions wishing to establish comparative collections of their own. However the other case, a pristine shipping crate with Handle With Care and This Side Up scrawled on one side, remained untouched and in the Historical Societys collections. This crate and its original contents are currently on display in the newly opened Explore exhibit in the Ohio History Centers entry hall.