THE NEWARK EARTHWORKS AND THE MOON

THE NEWARK EARTHWORKS AND THE MOON 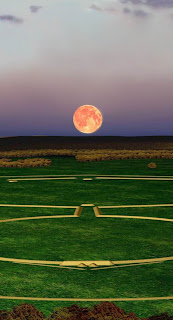 The Newark Earthworks are endlessly fascinating due to their immense scale, their geometrical sophistication, and the astronomical alignments built into the architecture. Ray Hively and Robert Horn, professors at Earlham College, found that the Octagon Earthworks, in particular, encode the complicated 18.6-year-long cycle of Moon rises and sets in the design of the walls and gateways. In their original 1982 paper presenting these provocative conclusions they argued that “the intellectual power, tenacity of purpose, continuity, and desire for precision that would be implied by conscious lunar alignment is certainly no greater than that required in the construction of the earthworks themselves, a feat which is not in dispute. The geometric regularity of the works shows clearly that the Hopewell had a strong concern for geometrical harmony, and it is not surprising that they might record celestial harmonies (perhaps essential to their calendar) in the same structure.”

I recently received an e-mail from Jim Drury and his brother-in-law David Routledge, a radioastronomer and Professor Emeritus at the University of Alberta, with an observation that suggests the record of celestial harmonies in the Newark Earthworks is even more remarkable than first imagined by Hively and Horn.

David observed that the proportional difference between the diameter of the Great Circle (1,190 feet) and the Observatory Circle (1,054 feet) was approximately equal to the proportional difference between the apparent diameters of the Moon at perigee and apogee.
The Moon’s orbit around the Earth is elliptical, not a perfect circle, so there are times when the Moon is farther away and times when it is closer to us. Perigee is that point when the Moon is at its closest and apogee is the point at which it is farthest away. At perigee, the Moon appears about 14% larger than at apogee. Here are the equations that Jim and David shared with me: Diameter of the Great Circle/Diameter of the Observatory Circle = 1190 ft./1052 ft. = 1.131 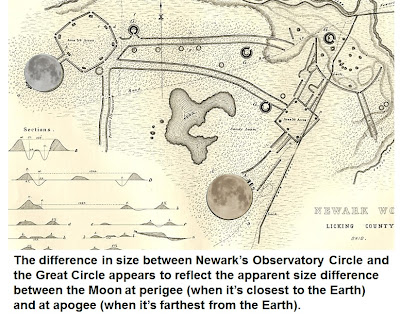 I shared this intriguing observation with my favorite archaeoastronomers Ray Hively and Bob Horn. Far from dismissing the possibility, Ray pointed out that if you use 1,185 feet as a more accurate estimate of the diameter of the Great Circle, the agreement is even closer. Bob expressed concern about the possibility that the correspondence simply could be a coincidence. He pointed out that the area of the Observatory Circle is 18.6 acres and the lunar cycle is 18.6 years in length. This certainly is a coincidence and serves as a cautionary tale warning us not to put too much faith in what numbers can be made to suggest.

Bob’s right, of course, but we already know that the Hopewell shaman/priests were careful observers of the Moon. It’s entirely likely they would have noticed changes in the Moon’s appearance and just as they embedded the rhythms of moonrise and moonset into their monumental architecture they also may have chosen to incorporate additional layers of hard-won celestial knowledge into the sacred earthworks.

The late Vine Deloria, in an essay on Power and place equal personality, wrote that Native Americans typically “represented and reproduced” the larger cosmos in their architecture as a way to provide a context in which ceremonies could occur. Thus, people did not feel alone; they participated in cosmic rhythms.

At the very least, I wholeheartedly agree with Ray’s conclusion that this new observation is intriguing and “should be kept in mind in interpreting future dimensions.”