The Moundbuilder Myth refers primarily to 19th century interpretations of the mounds and enclosures of eastern North America as the works of a lost civilization unrelated to the American Indian cultures that inhabited this region at the time Europeans arrived on the scene. “Moundbuilders” was the rather unimaginative label applied to the mysterious people responsible for the numerous and diverse earthworks. The myth was based principally on the perceived contrast between the scale and remarkable sophistication of the ancient architecture, which gave every indication of having been abandoned for at least centuries, and the generally small-scale and apparently relatively culturally impoverished American Indian societies then dwelling in the Ohio Valley. 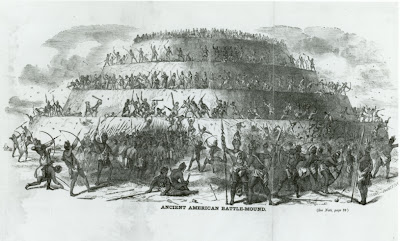 In most versions of the myth, the Moundbuilders were some non-Indian “race” from Europe, Asia, or perhaps Atlantis that built a magnificent empire in this hemisphere only to be overrun and obliterated by the ancestors of the “savage” American Indians, much as Eurasian barbarians were thought to have toppled the Roman Empire. One of the most evocative tellings of this epic is in William Cullen Bryant’s poem, “The Prairies”:

“All is gone; All – save the piles of earth that hold their bones, The platforms where they worshipped unknown gods, The barriers which they builded from the soil To keep the foe at bay – till o’er the walls The wild beleaguerers broke, and, one by one, The strongholds of the plain were forced, and heaped With corpses. The brown vultures of the wood Flocked to those vast uncovered sepulchres, And sat unscared and silent at their feast.”

Historians largely have assumed the myth was created by European-Americans more or less out of whole cloth as a just-so story to account for the presence of the amazing ancient earthworks, but also to cast the indigenous American Indians in the role of relatively recent intruders whose tenuous title to the land was based merely on conquest. Under these circumstances, the Europeans need not have felt any compunction about sweeping aside the supposed savage hordes to re-claim the land on behalf of civilization.

In my Columbus Dispatch column for June 5th I present the argument that this myth actually owes much of its substance to American Indian oral traditions recorded by early European pioneers. This does not, of course, lend credence to the story or make its use as a justification for the usurpation of American Indian lands any less heinous; but it makes the history of the myth more complicated and interesting. It also serves as a cautionary tale against uncritically accepting oral traditions as conveyors of accurate historical information. There is no archaeological, biological or linguistic evidence for Europeans in America prior to the tentative visits of the Norse beginning around A.D. 1000. The presence of the Norse was confirmed most spectacularly and unequivocally by the archaeological discoveries at L’Anse aux Meadows in Newfoundland, which is a Canadian National Historic Site. The alleged evidence offered in support of the Moundbuilder Myth consists of outright frauds (such as the Newark Holy Stones) or misunderstandings of data that have more parsimonious interpretations (most of the gigantic earthworks never served as fortifications). Regardless, the Moundbuilder Myth has achieved an enduring popularity for reasons concisely (if somewhat harshly) presented by Gerard Fowke in his 1888 article in the Ohio Archaeological and Historical Quarterly: “The truth of the matter probably is, that all this misconception is due to the readiness of people to accept notoriety and bombast for authority and learning; to believe the false, rather than the true, so long as it appeals strongly to their love of the marvelous. And this credulity is, in turn, fostered and encouraged by shrewd empirics who see in it something that may be worked to their own advantage; or stimulated by the honest but mistaken enthusiast who wishes to believe, and to have others believe, that these mounds of earth indicate for ancient America a dominion and glory like that shadowed forth by the stupendous ruins of half-forgotten empires of the East.”

Actually, Ohio’s earthworks are wonders of the ancient world in their own right and do not need the borrowed glories of any Eastern empire. By the way, I made an error in my Dispatch column, I say that Europeans didn’t get to Ohio until the mid-18th century. That was wrong. It should, of course, be mid-to-late-17th century. The classic illustration of an “ancient American battlemound is from the Traditions of De-Coo-Dah by William Pidgeon (1858). Robert Silverberg, in his popular book The Mound Builders, described Pidgeons work as a crazy masterpiece of pseudoscience.