THE MOOREHEAD CIRCLE — A CEREMONIAL MACHINE

THE MOOREHEAD CIRCLE — A CEREMONIAL MACHINE 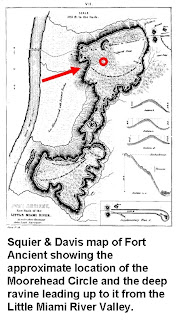 The Moorehead Circle, a woodhenge at the Fort Ancient Earthworks, is slowly giving up its secrets. In my column in the Columbus Dispatch, I provide an update on what Robert Riordan and his team of students and volunteers have learned after seven field seasons of patient and meticulous excavation.

The Moorehead Circle is an amazingly complicated site. Every shovelful of earth has seemed to reveal more puzzles than answers. Now, however, thanks to Riordan’s persistence, a general picture is coming into focus.

The Moorehead Circle, located at the head of one of the major ravines leading up from the Little Miami River, was a triple ring of large, wooden posts surrounding a central pit filled with red earth. A 40 by 50 ft rectangular structure was located adjacent to this central altar. An arc of alternating trenches and prepared floors on the southern half of the circle may have been something like bleachers, though Riordan doesn’t think it necessarily had wooden seats. In an e-mail, he suggested to me that these floors could have been places where “particular social groups, like members of clans, were supposed to watch the rites that occurred at the Circle’s center.” 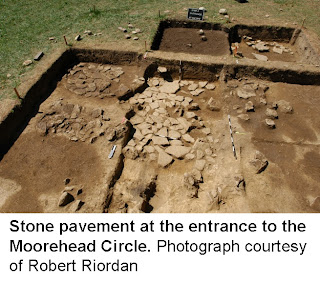 The  Moorehead Circle must have been the ceremonial heart of Fort Ancient. Riordan thinks it was a major focus of ritual activity for a century or more. There is clear evidence that at least some of the wooden posts were replaced at least twice. The rectangular structure was rebuilt at least once. And a limestone pavement in the main entranceway to the circle was refurbished on at least one occasion.

In a presentation of his research at the Eastern States Archaeological Federation’s and the Ohio Archaeological Council’s joint meeting in Perrysburg in October, Riordan focused on the culmination of the active ceremonial life of the Moorehead Circle. He said that the Hopewell people did not just abandon this remarkable ceremonial machine letting it fall slowly into ruin. Instead, they carefully dismantled its components and then sealed the site beneath a layer of gravel but not with an earthen mound.

Typically, the people of the Hopewellculture would have covered a place of such intense ritual activity beneath a mound, perhaps to commemorate the momentous events that transpired there or perhaps to insulate the community from the potentially dangerous spiritual power that still radiated from that sacred ground. The fact that they did not do so here is one of the mysteries of the Moorehead Circle and one reason why it was not discovered prior to the 2005 survey. This suggests that there likely are more sites like the Moorehead Circle out there waiting to be discovered — if not at Fort Ancient, then perhaps at the Newark Earthworks or the several earthwork sites that are part of the Hopewell Culture National Historical Park. 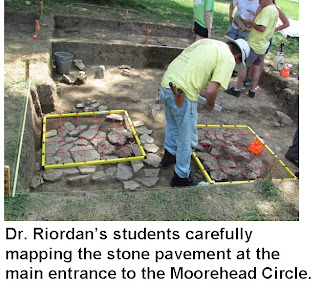 The Fort Ancient Earthworks is a part of the Hopewell Ceremonial Earthworks, which is on the United States Tentative List for eventual consider-ation for nomination to the World Heritage List.

Research such as Riordans work at Fort Ancient is essential for adding to our knowledge of the site. That knowledge can be used not just to increase our understanding of the Hopewellian achievement, but also to contribute to our management and conservation efforts as well as to generate public excitement about the site. Finally, being able to show that so much of the archaeological record is still preserved will help us make the case that Fort Ancientis a worthy candidate for inclusion on the World Heritage List.

Stay tuned to this blog for further updates on Riordans research and on the progress of our World Heritage nomination.