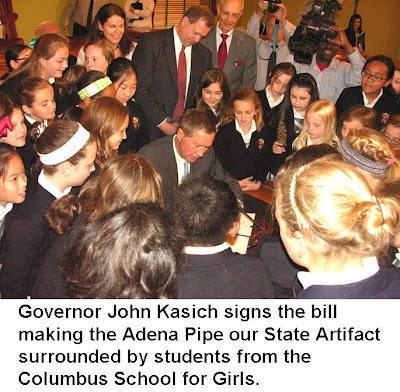 The Adena Pipe is now Ohios State Artifact.
So what?
As a friend of mine implied in a comment to my announcement on Facebook, is it just another meaningless exercise in naming State Things?
I dont think so. And I dont think you would think so either if you had been in the room at the Ohio Statehouse listening to Governor John Kasich talk to the students from the Columbus School for Girls who have been fiercely persistent in their effort to have this unique effigy pipe recognized as the State Artifact.
It certainly isnt meaningless to those young women and their teachers.
In their joint statement at the ceremony, Charlotte Stiverson and Tracy Kessler told their students the lesson they hoped everyone would remember 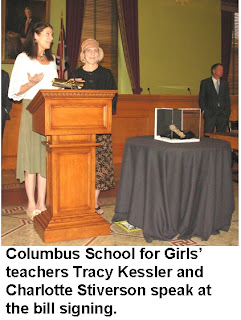 Your voice can be heard whether youre a child or a long, lost prehistoric culture.
These young women did their best to help give a sort of voice to Ohios ancient peoples. One of their most magnificent works of art now represents the State of Ohio.
You might say its only a symbol, but symbols can be extraordinarily potent.
Think about it.
Our State Artifact is a small masterpiece carved by a Native American artisan more than 2,000 years ago.
Its not a rubber tire, a light bulb, or an astronauts space helmet. Its not a soldiers saber, a judges gavel, or a politicians pen.
Unanimous votes from both the House and Senate declared in one voice that Ohio would pay homage to our Native American heritage with this symbolic honor.
I dont think thats meaningless. I think its a miracle.
Thank you to Charlotte and Tracy, to the students at the Columbus School for Girls, to the State Representatives and Senators who sponsored the bills and all of them that voted for both versions, and to Governor Kasich for signing the final bill into law!
Brad Lepper
Posted May 17, 2013
Topics: Archaeology