The 2008 Flint Ridge Knap-In: It’s That Time of Year Again

The 2008 Flint Ridge Knap-In: It’s That Time of Year Again 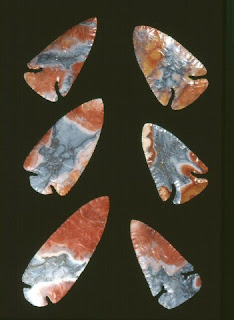 Seen in the inset are a set of projectile points made in the Archaic style by master flintknapper Roy Miller. They were flaked from slabs of flint cut from a single large block of very attractive Flint Ridge Flint Mr. Miller dug from his property adjacent to Flint Ridge State Memorial. On several weekends throughout the summer, Roy and other very talented local filntknappers were in attendance at the State Memorial to give informal demonstrations on how it is possible to turn a chunk of raw flint into beautiful utilitarian art. It is expected that the programs will resume again next summer. However, if you were unable to attend any of these small but informative sessions there is still the grand-daddy of them all to take place in a couple of weeks. From August 29 through August 31, 2008 the Flint Ridge Lithic Society, in cooperation with the Ohio Historical Society, will hold its annual Flint Knap-In and Stone Tool Technology Show at Flint Ridge State Memorial. As was the case for thousands of years past, the woods and the rolling hills of southeast Licking County around Flint Ridge will once again ring with the musical sound of hammer stone on flint as folks from all over the country gather at the ancient quarries to see old friends and make new and practice the art of flint knapping or flaking arrow heads and spear points from raw flint. Although the digging of flint on the State Memorial property itself is prohibited, there will be plenty of flint, obsidian and other raw material suitable for knapping available from other sources as far away as Australia. It is an excellent opportunity to see how things were made in very old times and how some modern practitioners have elevated what was once a subsistence skill to an art form. The annual Flint Ridge Knap-In is one the largest events of its type in the country and in years past over 100 knappers were on hand to demonstrate their craft. If you feel so inclined, there is always room for anyone else who just might want to give it a try. Additionally there will be demonstrations of other traditional crafts and skills including spear throwing with a device known as an atlatl. An atlatl is a handle-like device that allows a person to throw a spear further and at a greater velocity than with just regular arm motion. It was perhaps THE weapon of choice in prehistoric times in both the Old World and in the Americas and used extensively for hunting and warfare before the advent of the bow and arrow.

On Friday evening August 29 there will be a lecture/slide show on some aspect of local archaeology. The Friday evening presentation is an annual event at the Knap-In and has become very popular with those in attendance. Its also free and open to the public! On Saturday August 30, an archaeologist from the Ohio Historical Society will be on hand at the museum between 10:00 and 4:00 to identify artifacts and other objects brought in by the public. So if you have an arrow head you dug out of your garden or a few things grandpa found while plowing, here is a chance to find out about them.

Besides the Knap-In event its worth the trip to see the nearby Newark Earthworks, Ohios official prehistoric earthwork. You are also invited to spend some time exploring the beautiful and tranquil Black Hand Gorge located along the Licking River about 7 miles north of Flint Ridge, just off St Rt 16 at CR 668

If the weather cooperates the Flint Ridge Knap-In is always a fun and rewarding event. It’s even fun when it does rain. Hope to see you there!