Stones or Bones: The Tail of the Stone-a-Saurus

Stones or Bones: The Tail of the Stone-a-Saurus 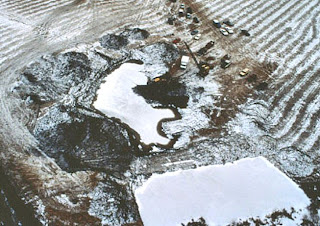 A few weeks back I received a call from a couple of sources that some large bones had been excavated in eastern Ohio near St Clairsville. However, neither of the sources could say for sure exactly what it was that had been found, if anything at all. But you never know! In the very cold winter of 1989 a contractor building a golf course pond (above) in a natural bog area near Newark, Ohio unearthed a magnificent specimen of the American Mastodon or Mammut americanum, what would later come to be known as the Burning Tree Mastodon. Below is a view of a full size cast of the mastodon skeleton. 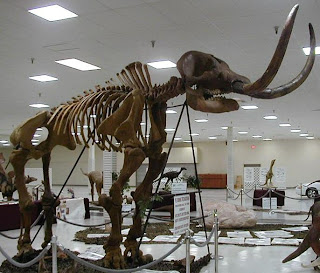 The actual skeleton was sold by the owner to a museum in Japan for a quite handsome sum of money. Not only was it one of the most complete specimens ever recovered but it appeared that the animal had been processed much like a modern butchered steer. That is, all the bones (save one rear leg) were present, many of them articulated one to the other in their natural associations but rearranged by sections, especially the leg quarters (much like a processed side of beef in a deep freeze). It became obvious that this could only have been the work of humans.

Even more evidence of human interaction was the numerous butchering marks noted on the bones of the rib cage. It appeared that the whole package, except the missing leg that may have been someone’s lunch, was purposely stashed in the pond for safe keeping. According to Dan Fisher, Professor of Paleontology at the University of Michigan, the caching of butchered animals in bog ponds during the cold months appears to have been common practice of ancient hunters, at least in this part of the world. Not only would this preserve the meat to some degree but would keep it away from scavengers, both the two and four legged varieties I suppose.

This being said, what was distinctly unique about the Burning Tree find was that the gut contents or the remains of the animals last meal of moss, swamp grass and water lilies was still intact and that the digestive bacteria, dormant for more than 100 centuries, were still alive and well and for a while were considered the oldest living things on Earth! 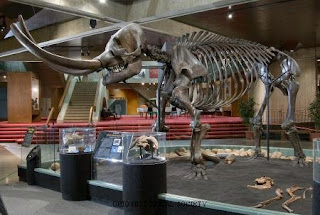 Additional mastodon specimens have also been discovered in Darke County near Rossburg, in Knox County near Martinsburg northeast of Mt Vernon and near Johnstown in Licking County. The Conway Mastodon, above, was discovered in a swamp near the Clark / Champaign County line in 1887. In the 1990s the skull cap of a very rare Pleistocene musk ox Bootherium bombifrons, with horn cores intact, was found south of Newark during the construction of the SR 79 bypass around Hebron. The horn cores and an artist’s rendering can be seen below. For scale, it is nearly 16 inches between the tips of the horn cores. The cores are projections of living bone that support the actual horns composed mostly of keritin and other protiens, similar to our fingernails. Both the Conway Mastodon and the Hebron Musk Ox skull cap (case in foreground) are on display next to each other at the Ohio Historical Center in Columbus.

More recently a contractor was digging clay at a site in Medina County. The excavated material was to be used to create a compacted floor for a horse paddock. At about 14 feet deep he snagged the antler rack of an ice age stag-moose known as Cervalces scotti. Excited with his find but not sure of what it was he found he took the time to look in the back dirt and recovered several more bones. He also had the presence of mind to report this very significant find to the Ohio Department of Natural Resources. Word soon reached Bob Glotshober, Curator of Natural History at OHS and subsequent explorations by OHS personnel recovered additional bones of this same animal now known as the King Ranch Cervalces. It was only the ninth but most complete specimen of Cervalces discovered in Ohio. One of the other eight can be seen laid out below the Conway Mastodon in the frame above. Another was comprised of just two long bone fragments recovered at the Burning Tree site. Below is a mounted skeleton of Cervalces scotti at the Royal Ontario Museum in Toronto, accompanied by an artists interpretation of how Cervalces may appeared in its natural environment (also below). 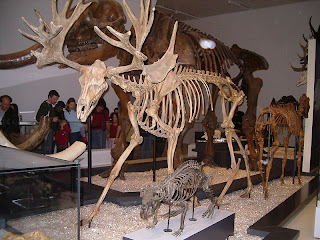 The point is that there are indeed remains of giant ice age beasts, technically referred to as Pleistocene megafauna, yet to be discovered in Ohio and elsewhere and as land is developed especially around the Great Lakes other specimens will continue to turn up from time to time.

For a variety of geologic reasons the Great Lakes region rich in such remains, enough so that the mastodon is Michigans state fossil. As we all know, rich is only relative and the recognized discovery of any fossil bones is uncommon. Discovery of complete or nearly complete skeletons remain as extremely rare occurrences. It should be easy to understand then why a phone call indicating that another specimen may have been discovered would create a measure of excitement. I later talked to the contractor and he informed me that the next week he had business in Columbus and would be glad to bring them by. What he presented appeared at first glance to be several cartons of chalky white limestone nodules. However he took several pieces from one carton and laid them in a line and said that was pretty much how he found them. It looked for all the world very much like articulated giant flanges or finger bones or perhaps a series of bones from the tail of some great beast or “Stone-a-Saurus” as seen below. This series of bone-shaped objects total nearly three feet in length. However the chalky limestone material they were composed of was nothing like mastodon bone, or any other megafauna bone, which comes out of the ground as exactly that – bone! Even at several thousands of years old they simply arent of sufficient age to have lithified or turn to stone. That process that takes precise environmental/geological requirements not to mention millions upon millions of years.

Yes, dinosaur bones are really stone.The bed rock in the far eastern edge of Ohio and western Pennsylvania was laid down between about 300 and 250 million years before present during the Permian Period at the end of the Paleozoic Era. Dinosaurs did not come along until later, during the Mesozoic Era. For whatever reason Mesozoic bedrock does not occur in Ohio so fossil dinosaur bones are never found around here. But, that doesnt mean there werent sizable vertebrate animals, both terrestrial and marine, to be found during the middle to late Permian period.

To be sure some of them were quite large but I dont know that the remains of the great Permian reptiles and/or fishes, large or larger, have ever been found around here either. As an interesting aside it was the terrestrial reptilian forms of the Permian Period, known as Thecodonts (Greek for socket tooth referring to the trait of teeth set in individual sockets, just like we humans), that gave rise to the dinosaurs and just about everything that has evolved since. Renowned dinosaur expert Bob Bakker in his 1986 book The Dinosaur Heresies argues that these proto-dinosaurs they were actually warm blooded, a trait that was passed down to the descendant dinosaurs. This ability to internally regulate their body temperature is why many dinosaurs, especially those at the smaller end of the size scale, were able to thrive and survive in those regions that were at that time polar-like environments. Bakker’s controversial views run pretty much contrary to everything anyone ever knew about dinosaurs before this.

So what of our alleged fossils? Several people who have seen them and who have also seen a lot of genuine fossil forms think that they are tremendously interesting and sure look like they ought to be something but exactly what they cant say. One explanation offered is that they are simply weathered limestone nodules from a freshwater limestone/clay unit, showing some degree of selectivity on the part of the individual who collected them or in the mind of those who look at them. Are they really fossils or perhaps derived from fossils or are they some sort of pseudomorphic form that only mimics what we think bones should look like? It is all quite plausible. Selection can be a funny thing and play tricks on the selector. I have done numerous artifact identification events where the public is asked to bring in artifacts and other stone oddities to be identified. I have seen such things presented as stone plowshares and stone shoe lasts, neither of which probably ever existed but whoever collected them had some expectation of what they thought it should look like so when they saw it they saw it. At one of these events a few years ago a young man showed be his collection of hammer stones. They all looked like they could be just that, nice round rocks that native people would use to pound stakes or whatever. The thing was that he said they were all collected from a creek behind his house and I informed him that they were just water worn rocks that have tumbled down the creek bed for a long time. He looked as if he didnt believe me and asked then why are they all so perfectly round? My answer was because you chose to pick up the roundest ones. He said oh and then asked if I had a rock garden in which I would like to put them.

Below is an image of several of the stone-bones including those elements that appear to articulate one to the other. What are they? Are the stone-bones some sort of fossil remnant or are they just oddly shaped rocks that sure ought to be something but you just dont know what? I guess its a case of you be the judge. If anyone has any ideas I would like to hear them.
Bill Pickard 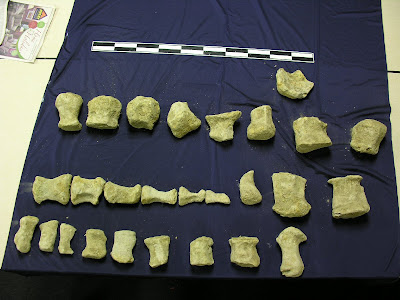