After the stay-at-home order was enacted to slow the Covid-19 pandemic in Ohio and other US states, many of us are finding more time on our hands, and are choosing to spend it outside as the weather warms and spring returns. People are walking in their neighborhoods, sitting on front or back porches, or working on their Victory Gardens.

As a result, folks are taking the time to observe nature and wildlife. Helpful pollinators like bees and butterflies, the return of migratory songbirds, and familiar suburban denizens as rabbits and deer are being noticed and welcomed with enthusiasm; but some of our wild neighbors do not garner the same reaction.

With the warming weather, snakes are also emerging from their winter hibernacula to find food and mates. Springtime usually brings an increase in snake sightings, but with many more people outside than usual, the reports (and the fear) seem to be at an all-time high.

Ohio is home to about 33 species of snake, and only 3 of them are venomous. I’ll cover the 4 most common snakes in Ohio and our 3 venomous species a little later, but for now I want to touch on some of the methods used to distinguish venomous snakes from harmless ones, and why they are unreliable.

Common Defensive Behaviors, or how NOT to tell venomous and nonvenomous snakes apart

Many traits and behaviors thought to be diagnostic of venomous snakes are actually common to many harmless species. I’ll go over the top four venomous snake identification myths below.

Arguably the most unreliable method for distinguishing venomous snakes is looking for a “triangle-shaped head”. The thinking is that the venom glands in their upper jaws give them an arrow-shaped head, but many harmless snakes will “flare out” their heads to appear larger and thus more fearsome, giving their heads a triangle-shaped appearance. If you are unfamiliar with snakes, it is very hard to tell the difference between the two. I’ve shared a few memes below that show why. The two photos below show the same harmless Northern Watersnake before and after a human elicits a defensive response. The infographic below shows 9 harmless and beneficial snake species all displaying a triangular or arrow-shaped head. In fact, many nonvenomous snakes will vibrate or “buzz” their tails when agitated. The resulting sound can be startling, and can sound very much like the buzz of a rattlesnake. It’s often mistakenly said that they are “imitating” rattlesnakes, but in fact the tail-vibrating behavior is so widespread among venomous and non-venomous snakes that it likely evolved before the rattle – so the rattle just augmented an adaptive behavior that was already present.

Here’s a video of a ratsnake buzzing its tail:

Here’s an Eastern Milksnake that was initially misidentified as a rattlesnake because of that tail-buzzing behavior:

It’s also thought that the more “aggressive” a snake is, the more dangerous/venomous it is. The first point I want to make is the important difference between “defensive” and “aggressive”. Snakes are defensive, not aggressive. Snakes will defend themselves from predators, but they will not waste energy by being aggressive – i.e., pursuing and terrorizing animals larger than itself. Having been around my fair share of venomous and nonvenomous snakes all over the United States, in my experience it’s often the nonvenomous snakes that turn out to be much more defensive!  So if you encounter a snake that is lunging and striking, remember that it is terrified of you, believes it is fighting for its life, and is quite likely harmless. Simply take a few steps back, and watch as the snake promptly flees! Two copperheads, one with a round pupil and the other showing a vertical pupil

In short, there is no “shortcut” to distinguishing venomous snakes from their harmless counterparts. Your best bet is to just get familiar with the few venomous snakes in your area, watch where you put your hands and feet, and leave a snake alone if you aren’t 100% sure what it is. For a deeper dive into the “rules” and “rhymes” many of us learned and why they are not helpful for identifying snakes, I highly recommend Micha Petty’s excellent article, “How Not To Identify A Venomous Snake.”

This lanky species is the longest and most common snake in Ohio. It can be up to 7 feet long, but they are usually between 4-6 feet long. It was formerly lumped with 3 other similar-looking ratsnake species that were collectively called the “Black Ratsnake”, Elaphe obsoleta. They are also sometimes called pilot snakes, chicken snakes, or oak snakes. They are closely related to the smaller corn snake or red rat snake (Pantherophis guttatus), which are often kept as pets. 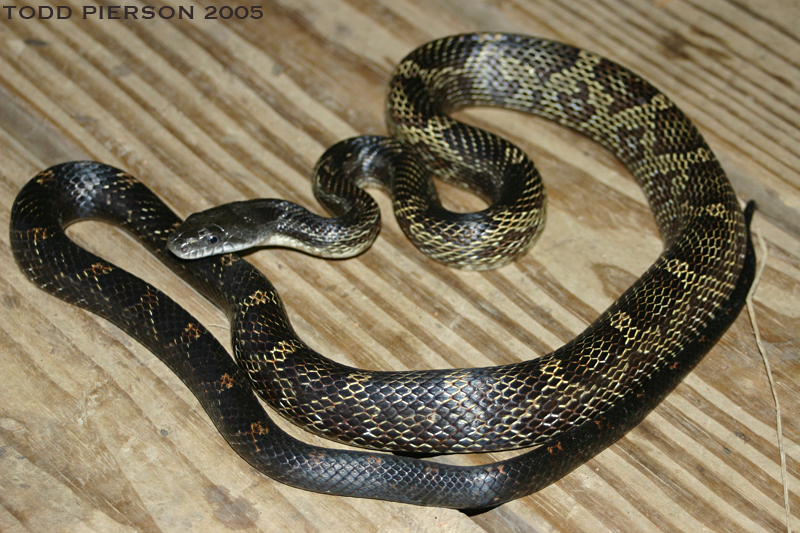 They are gray or dark-colored, usually gray or black or brownish with a faint pattern of saddles, but can be completely black, and have a cream-colored chin and belly. As babies (below) they are more boldly patterned, usually light gray with dark saddlese, and are often mistaken for baby copperheads.

Ratsnakes are best known for their climbing ability. Nearly all snakes can climb, but ratsnakes have turned it into an art. One shorthand used by snake enthusiasts is captured in the meme below. They are extremely effective pest control – far superior to any barn cat – and help prevent the spread of diseases that rodents carry and spread such as Lyme, hantavirus, and bubonic plague. In addition to rats and mice, they will also eat bird eggs and nestlings if given the opportunity. They are most often encountered by humans in barns, attics, building rafters, and chicken coops. When encountered, they often kink their body and lay completely still in an attempt to escape detection. This “kinking” of the body (below) is very distinctive, and diagnostic of North American rat snakes in general.

If accosted, like other harmless species they may strike at their antagonizer and vibrate their tails, which leads to many cases of mistaken identity.

This adorable and secretive little snake is probably the most common snake in urban environments east of the Mississippi, and in that setting is most often encountered under objects in yards, gardens, and the vestibules of buildings. They are a frequent target for free-roaming housecats, and may be brought into human dwellings as offerings. They are also found under logs and rocks in a variety of natural habitats. This tiny snake rarely exceeds a foot in length, with the females being slightly larger than the males. As their name suggests they are usually a shade of brown, with black markings under the eye. 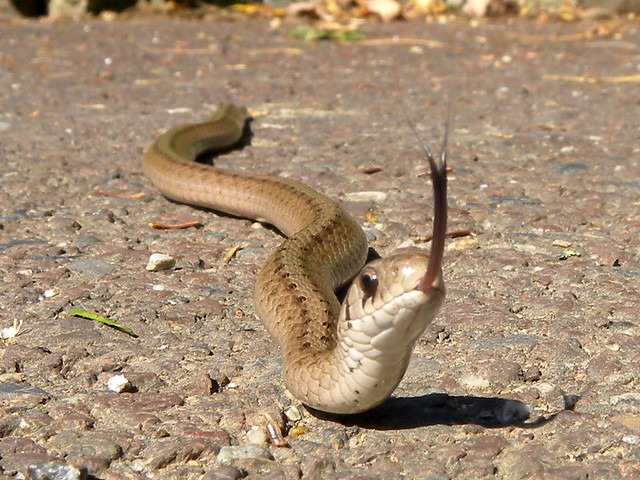 They may have stripes or dots, and when agitated they will inflate their bodies to reveal a faint checkered pattern (below).

They are often misidentified as the young of various venomous species. If accosted they will make an adorable attempt at being fearsome by gaping, rearing up, and striking (below), reinforcing these mistaken identities.

However, these tiny snakes pose no danger to anything but the slugs and worms and other soft-bodied invertebrates that are their preferred prey. This colorful snake is named for the stripes that run the length of its body, which resembled the striped stocking garters that were once fashionable.

They are a smallish and slender snake, usually 2-3 feet long, with the females being larger than the males. They are variable in color, ranging from brownish or black, grayish, or even bluish in some cases, but they almost always have a cream or yellow stripe along the back, and one on each side. They may sometimes have a faint checkered pattern or reddish dots. 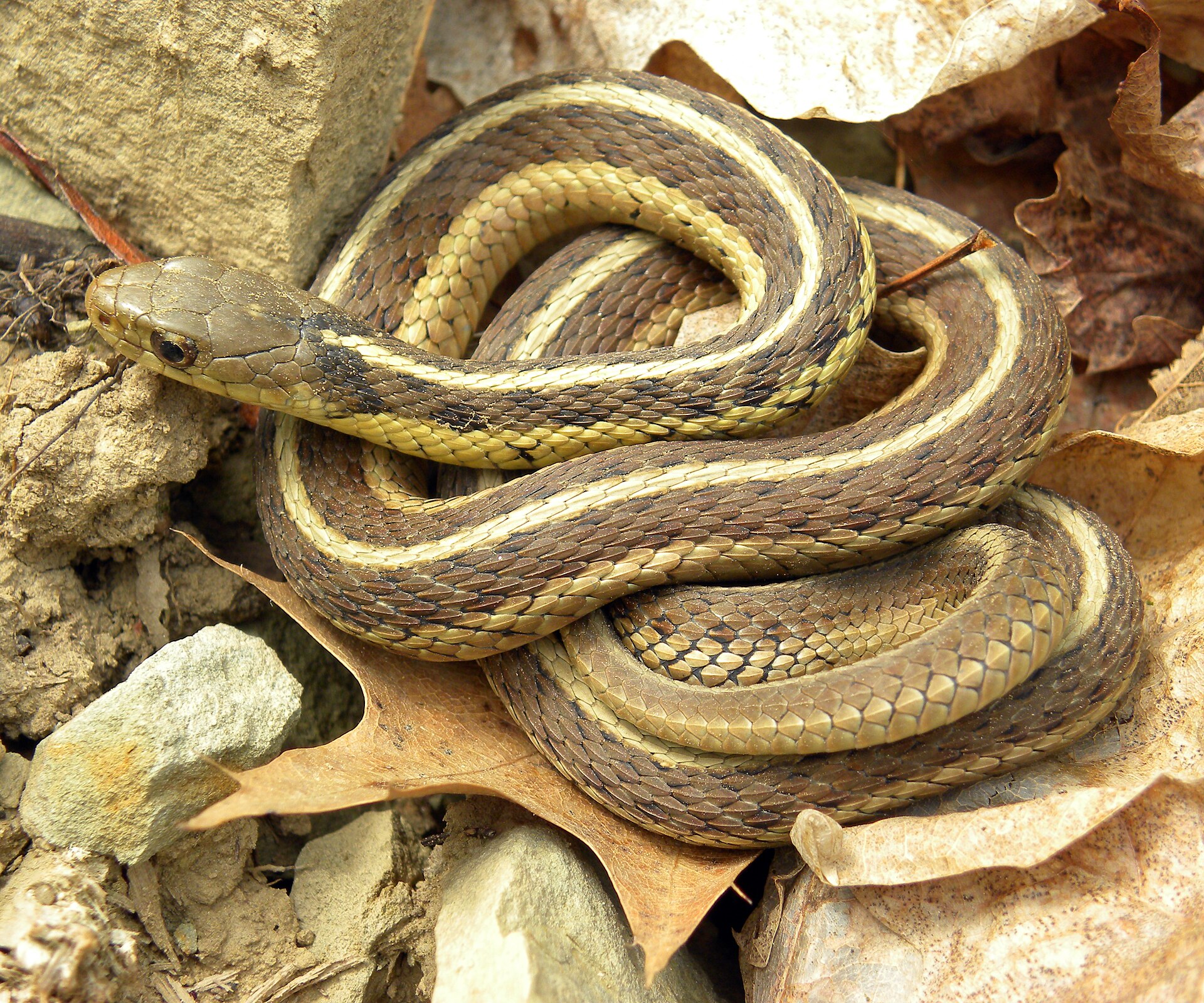 Their preferred prey are amphibians, fish, slugs, and earthworms, so they are most often encountered by humans near water features or along creeks or other drainages – anywhere that their prey may also be found. They spend the winter in underground spaces such as basements, cisterns, or rock piles, and can emerge in large numbers all at once in the spring – a phenomenon mistakenly referred to as a “nest”.

Once above ground in spring they congregate into masses, which are almost always comprised of one larger female and many smaller males – not a mother and babies, as is often assumed. Garter snakes are inquisitive and active snakes, but if threatened they tend to flee rather than stand their ground. They are less often mistaken for venomous species due to their distinctive stripes.

As its name suggests, this stout-bodied snake inhabits creeks and waterways and preys on fish and frogs. This common snake is very often confused with copperheads and cottonmouths throughout its range. This patterned snake can range in color from brown and black to brick red and orange, and its face has a “froggy” appearance due to its slightly bulging eyes. 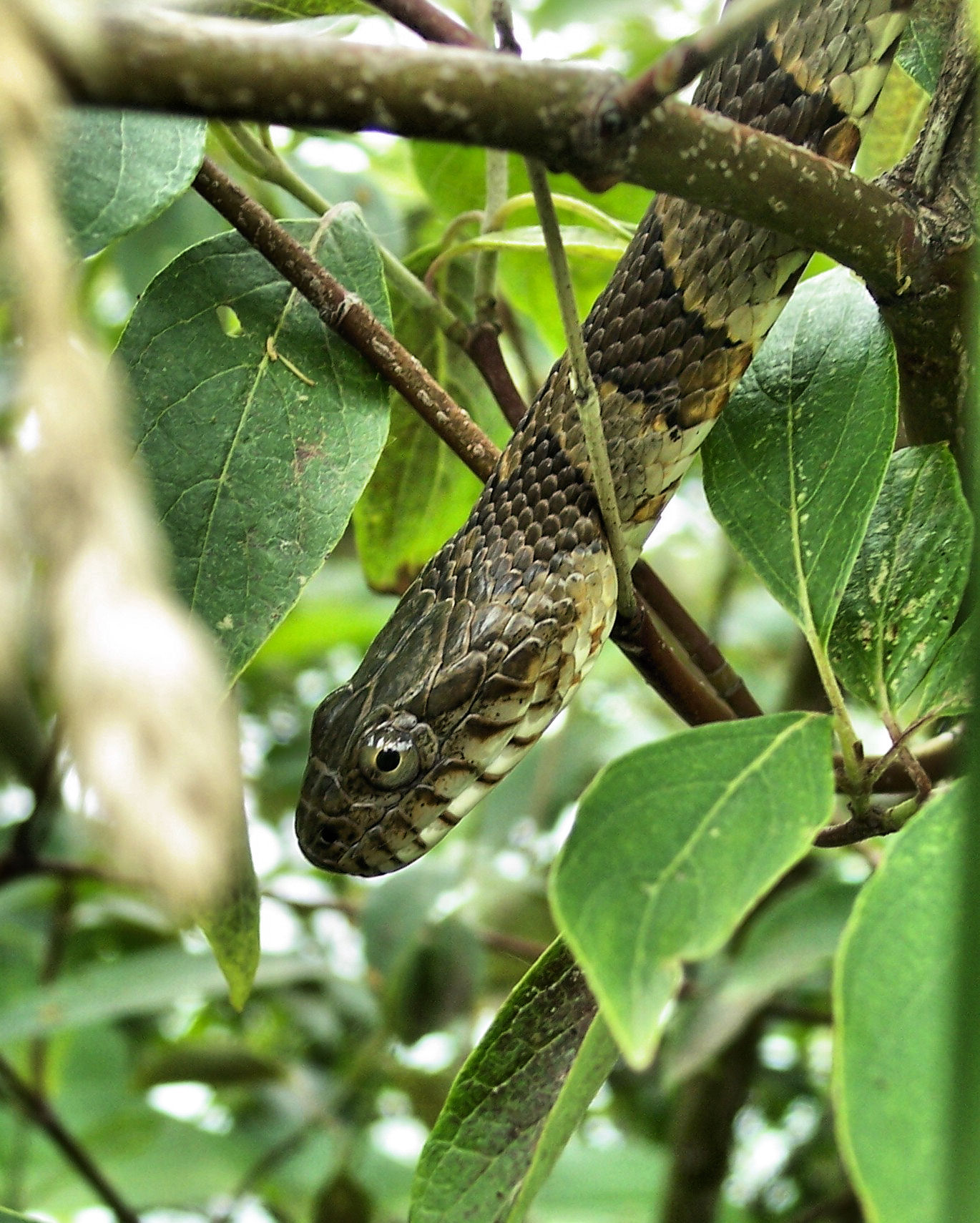 As juveniles, like ratsnakes watersnakes are also boldly patterned. (DISCLAIMER: NEVER pick up a snake that you can’t identify as harmless with 100% certainty.) 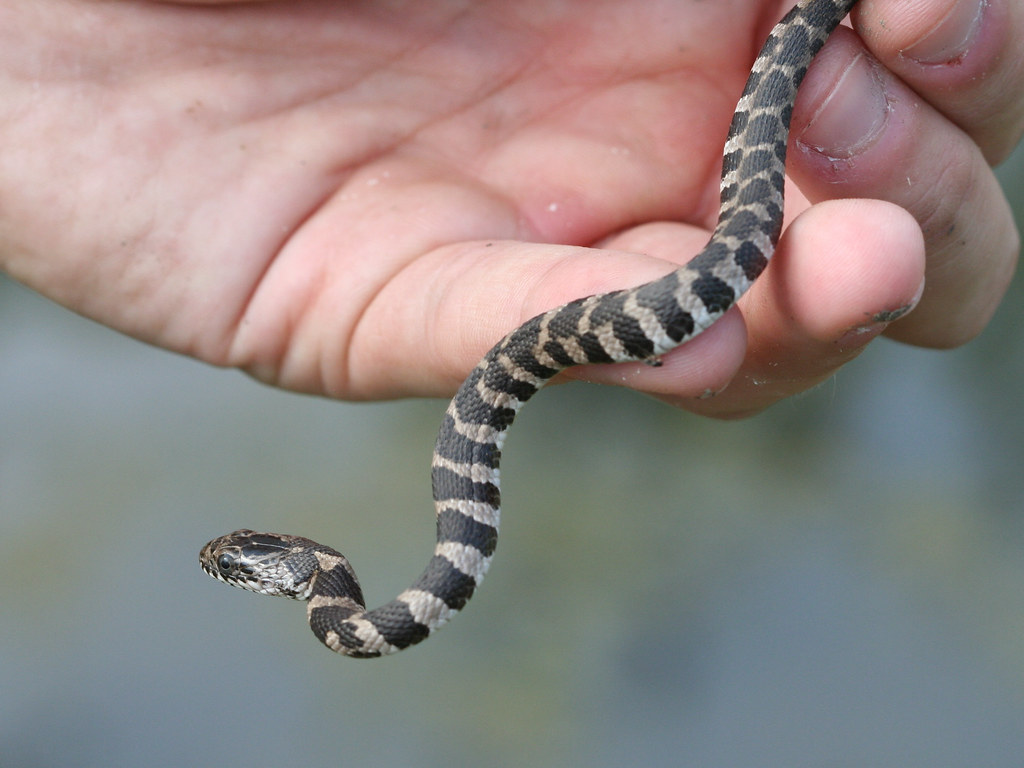 In areas frequented by anglers they can habituate to human presence, and have been known to approach people hoping for an easy meal of the dazed, too-small fish and offal that anglers discard. If accosted, the watersnake will not hesitate to defend itself by attempting to bite, but like all snakes it will flee if given the chance. Its pale-colored mouth and “feisty” reputation leads to many cases of mistaken identity. People misidentify watersnakes as water moccasins/cottonmouths (Agkistrodon piscivorus) so often that it’s become a joke among snake enthusiasts, as captured in the meme below:

Look for a barred upper lip to distinguish this harmless neighbor from the venomous copperhead and cottonmouth (but note that the latter does not occur in Ohio!).

Stay tuned for Part II of this blog post, where I will cover some snake bite statistics and the three venomous snake species in Ohio!