Some Thoughts on Tremper Pipes

Some Thoughts on Tremper Pipes

In honor of the Easter season and finally, the arrival of Spring, the item picturedhere from the OHS archaeological collections seems appropriate.

Object A125/44 is the rabbit or hare effigy platform pipe from the Tremper Mound collection. It was one of 136 smoking pipes included in a great cache of over 500 objects excavated from Tremper Mound in 1915 by William C. Mills of the Ohio Archaeological and Historical Society (now the Ohio Historical Society). Tremper Mound was located on a low plateau above the Scioto River about five miles north of Portsmouth, Ohio and dated more or less to the Ohio Hopewell period of between about 100 B.C. and A.D. 400 or 500. It consisted of a relatively low, irregular mound eight to nine feet in height, measuring about 120 x 250 and surrounded by a slightly flattened ovalin the range of 400 x 500. 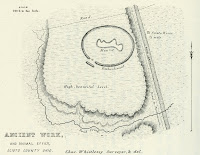 Seen above is Charles Whittleseys 1840s map of the Tremper Mound and Earthwork (although not named as such at the time) from the 1847 Squier and Davis volume Ancient Monuments of the Mississippi Valley, the first book ever published by the Smithsonian Institution and still considered by many as the bible of mound archaeology in North America. The Hopewell culture is celebrated worldwide for their expansive geometric earthworks as well as their trade in exoticmaterials from all over North America such as obsidian, copper, mica and marine shell used to craft spectacular funerary and other objects. The Hopewell culture was named after a large burial mound and earthwork complex on the farm of M. C. Hopewell, located along the North Fork of Paint Creek west of Chillicothe, Ohio. The Hopewell culture was particularly manifest in southern Ohio although regional variations of the Hopewell phenomenon occur in Missouri, Illinois, Indiana, New York and in the Southeast. In Ohio, other Hopewell earthwork groups presently include or did include those at Marietta, Newark and along the Scioto River from Circleville to Portsmouth, especially in the vicinity of Chillicothe.

In his 1915 excavations Mills uncovered a series of post molds located at the base of the mound indicating that the mound had been erected over the remains of a large structure with a number of smaller bays or alcoves. The great cache was found in one of these bays at the east end of the structure. In the image to the right, Mills, wearing the broad-brimmed hat and snake boots, can be seen directing his 1915 excavation force.

The smoking pipes recovered included two styles of platform pipes as well as cigar- shaped tubular pipes. Other objects in the cache included items of carved bone, wood, fabric and various exotic materials including mica, quartz crystal, copper, flint and stone. When unearthed, the artifact cache was found in a fired clay crematory basin and most of the objects were thoroughly fragmented. It was Mills contention that the fracturing did not necessarily result from exposure to heat but that perhaps many of the objects had been killed or broken in some sort of ceremonial fashion prior to interment. Regardless of how they became to be in this condition the collection as it exists today is the result of literally years of careful restoration work. A second artifact cache containing nine intact pipes was found in a substructure of the mound about 3 feet above the original mound floor. Modern radio-carbon assays of material recovered by Mills in 1915 indicate that the mound was likely built late in the first century B.C., placing it in the earliest part of Hopewell occupation in the Scioto Valley.

Platform pipes were a form common to the Hopewell period and for a relatively brief time thereafter. Typically they were fashioned from some sort of soft stone such as pipestone, steatite or chlorite. They are of simple basic construction, consisting of a smoking bowl carved as an integral part of an often thin, rectangular base or platform, which may range from flat to extremely curved when viewed from the side. The pipes are smoked from the end of the platform through a small drilled hole that intersects with a hole in the base of the bowl. These objects are found in two basic styles: animal effigy pipes where the smoking bowl is often carved to resemble some sort of animal entity and the plain or so-called monitor pipes for their resemblance to the Civil War iron-clad gun boat Monitor. As a note of interest, the smoking holes on effigy pipes are almost invariably located so that the smoker is looking directly into the animal entity’s face during use. Monitor pipes often have short, relatively simple, cylinder-shaped smoking bowls although many are tapered or flared or have some other sort of decorative detail. A variant of the monitor style is the tall bowl or tall stack pipe. These fit the over all description of a typical monitor style pipe but are made on an exaggerated scale with a larger platform and a bowl that can be several inches in height. Moderate examples of the “Tall Stack style are seen at the left. A125/62 has a curved platform base; A125/66 is the item with the flat platform base. Of the pipes recovered from Tremper Mound, about 60 were of the effigy type. These are particularly notable for their veristic or true-to-life renderings of the various birds and other animals from the Hopewell environment including raptors, water fowl, song birds, amphibians, carnivores and a host of other creatures common to forest and stream. It is often the case that the carvings are so delicate and so well executed that its possible to tell exactly which species of bird or toad is being portrayed or in the case of the river otter, one can actually count his nose whiskers and see the scales on the fish in his mouth. It should be noted that such detail was imparted to objects rarely exceeding three or four inches in length and achieved using tools absolutely primitive by any of todays standards.

For several decades and contrary to several well made arguments, it had been accepted that the Tremper pipes were all carved from Ohio Pipestone, a well crystallized form of kaolinite that can easily be worked with flint and stone tools and is found in abundance at Feurt Hill, just a few miles east of the Tremper Earthworks. It only made sense, or so it was thought. However, recent non-destructive testing on a number of the Tremper pipes in the OHS collections using a PIMA or Portable Infrared Mineral Analyzer system indicates that of those Tremper pipes sampled, 16% were made of Catlinite, a fine grained red argillite from the pipestone quarries in southwest Minnesota. This is especially true of the tall bowl pipes and should come as no great surprise in general given the penchant of the Hopewell culture to utilize exotic materials procured from well outside their heartland. For further information see:
Thomas E. Emerson et al. Tremper Mound, Hopewell Catlinite and PIMA Technology Mid-Continental Journal of Archaeology, Volume 30, Number 2, Fall, 2005

Dr. Edwin Davis, the Chillicothe physician who teamed with the New York newspaper man Ephraim Squier to publish Ancient Monuments of the Mississippi Valley, excavated a cache of nearly 250 animal and human effigy pipes from Mound 8 at Mound City north of Chillicothe. The collection was soon considered the marvel of both the scientific and antiquarian communities, being admiringly referred to as the American Menagerie. Unfortunately Squier and Davis soon after Ancient Monuments… was published they parted ways under less than amicable terms. Having lost just about all interest in such things, Davis sold his collection to the British Museum where it presently resides.

Exactly how these icons may have functioned in the Hopewell cosmology or world view is not presently well understood, if at all. Perhaps it is more proper to admire them for the human endeavor they represent and the works of art they are and have become.