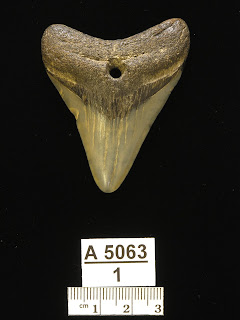 As some of you may already know this is Discovery Channel’s Shark Week! In celebration we thought you’d enjoy this “little guy” found at Fort Ancient earthworks in Warren County, Ohio. This Carcharodon megalodon tooth was drilled to be worn as some sort of Hopewell culture ornament and was brought in from the east coast of the United States about 2000 years ago. But even 2000 years ago this shark tooth was already really old, coming from the Miocene epoch 5.3 to 23.7 million years ago!

Based upon the size it is estimated the shark would have been just over 15 feet long and, speaking for myself, I would not want to come up against one of these teeth attached to a moving mouth!