SERPENT MOUND AND THE CRYSTAL SKULLS

SERPENT MOUND AND THE CRYSTAL SKULLS

Late last month, Serpent Mound witnessed a ceremony that, I can say with some assurance, it had never witnessed before. 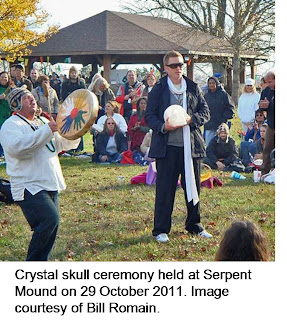 Thirteen crystal skulls were brought together here as part of series of such gatherings at sacred sites expected to have culminated on 11/11/11 at the Crystal Skulls World Mysteries Gateway Conference to be held at a Los Angeles hotel. (This may not, in fact, be the culmination referred to in an October 29th article in the Columbus Dispatch, for the crystalskullsevent.com website assures us that some VERY exciting things are planned for a subsequent event on 12/12/12.)

According to a poster advertising an October gathering of the skulls in New York City, there is a legend of 13 ancient crystal skulls that, when reunited, will lay a new grid of consciousness for humanity. The skulls are suggested to be more than artifacts. Many unnamed intuitives are said to feel that they are presences with the power to raise our collective vibration. The poster goes on to claim that these ancient skulls are here at this critical time to bring us the wisdom of the past & the knowledge of the future. The Dispatch article affirmed that the organizers of this event believe the skulls have paranormal powers and that they are associated with Maya or Aztec culture. Moreover, they are claimed to have some connection to the 2012 Mayan Prophecy concerning the supposed imminent end of the world.

I discussed these issues in my Dispatch column on November 13th, but offer here a few additional thoughts. I am not able to speak to whether these skulls possess the paranormal powers attributed to them by the promoters of these events. I can, however, rather conclusively assert that there is absolutely no evidence to suggest that they are either ancient or Mayan. There is, in addition, nothing in the indigenous Mayan belief system to suggest that the world will end on December 21st 2012, but I will confine this posting to a consideration of the artifacts. 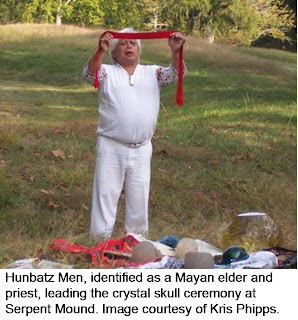 Jane MacLaren Walsh, a Smithsonian Institution anthropologist, noted in her article Legend of the Crystal Skulls in the May/June 2008 issue of Archaeology magazine that there is no reliable evidence that any crystal skull was ever found in an archaeological excavation in Mesoamerica (or anywhere else for that matter). She conducted microscopic analyses of two of the most famous skulls, one in the Smithsonian and one in the British Museum, and demonstrated they had been carved with 19th century tools and techniques not available to the ancient Maya. After conducting a detailed historical review of the circumstances surrounding several crystal skulls, she concluded that not only are they relatively recent fabrications, but all of the smaller crystal skulls that constitute the first generation of fakes were made in Mexico around the time they were sold, between 1856 and 1880. Moreover, they may represent the work of a single artisan, or perhaps a single workshop.

According to Frank Thadeusz, writing in the October 7th 2011 issue of Der Spiegel, the source of the crystal from which the crystal skulls were made is, not Mexico, but Brazil and Madagascar. He thinks many of the skulls were carved by jewelers in Idar-Oberstein, Germany, who are both masters of their craft and quite discrete. Under the circumstances, its hard to imagine why powerful ancient Presences would find these recent crystal creations to be suitable vehicles for their inhabitation, but perhaps I am simply exhibiting the limitations of my imagination.

I was not able to be at Serpent Mound for the gathering of crystal skulls, but I am told the event attracted a large and well-mannered group. I certainly don’t wish to leave the impression that they, or indeed any visitors, are unwelcome at the site, but I firmly believe that the fabricated histories of crystal skulls detract from the authentic ancient heritage of Serpent Mound. I post this article for the benefit of those who might otherwise be persuaded that these infamous artifacts had something to do with the worlds most spectacular effigy mound. They don’t. Or at least they didn’t before November.

Here is a link to my column in the Dispatch: http://www.dispatch.com/content/stories/science/2011/11/13/13-skulls-nonsense-detracts-from-real-mayan-achievements.html

Here is a link to the original Dispatch article on the gathering: “13 skulls headed to gathering” http://www.dispatch.com/content/stories/life_and_entertainment/2011/10/29/13-skulls-headed-to-gathering.html

Here are links to the Jane MacLaren Walshs articles in Archaeology magazine: “Legend of the Crystal Skulls” http://www.archaeology.org/0805/etc/indy.html

“The Skull of Doom” http://www.archaeology.org/online/features/mitchell_hedges/