Steve Shaffer is in a world of trouble over a big rock he and some others fished out of the Ohio River last year. According to news reports, he’s been charged with violating Kentucky preservation laws for removing an artifact from Kentucky property without a proper permit. The rock in question is an 8-ton boulder known as the Indian Head Rock. It is engraved with a number of petroglyphs, including a large human head, and it was a prominent feature of the Ohio River across from Portsmouth until the 1920s when a series of dams raised the level of the river and the rock was more or less permanently submerged.

The petroglyph, or rock carving, was described by Ephraim Squier and Edwin Davis in their 1848 study of the Ancient Monuments of the Mississippi Valley, which was the very first publication of the Smithsonian Institution: “There is however a very singular one [sculptured rock] still in existence a few miles above the town of Portsmouthat the mouth of the Scioto. It consists of a colossal human head cut in outline, upon the vertical face of a large rock extending into the river. It is always under water, except when the river is at its very lowest stages, and is not exposed oftener than once in four or five years. It is familiarly known as the ‘Indian’s Head,’ and is regarded as a sort of river gauge or meter. When the water-line is at the top of the head, the river is considered very low.” Shaffer and a team of fellow researchers and divers rediscovered the petroglyph and hauled it out of its murky obscurity and into the light of controversy.

It is clear that Shaffer’s intention was to remove the petroglyph from the river, where it would eventually be destroyed by erosion, and put it on display where it could be more widely appreciated. The problem, apart from the laws that Shaffer is charged with breaking, is that many rock art experts, like Jean Clottes, believe that this art “cannot be separated from its surroundings. It is a part of the landscape, which in turn often plays a major role in its meaning.” So, a number of folks want to have the Indian Head Rock returned to the Ohio River. I understand both sides of this issue. It would be a shame for this petroglyph to be dropped back into the river where no one would be able to appreciate it and where eventually it would be erased by the actions of the river. On the other hand, the places where such art was created and displayed are integral to its original purpose and meaning, so by removing the rock, we have lost this context.

In 1914, the Ohio Historical Society was faced with a similar dilemma. The Saxon Petroglyphs were a series of symbolic figures carved into the rock that formed the bank of the Ohio River near the small town of Saxon, Ohio. Henry C. Shetrone described them in a 1914 article in the Youngstown Vindicator. Shetrone proclaimed, perhaps with some exaggeration, that “Ohio’s Mona Lisa has been found.” 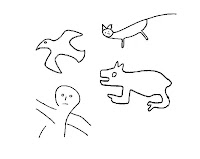 The panel of petroglyphs included images of a variety of animals, such as a bird and a bear, as well as other, less representational symbols. William C. Mills, then the Ohio Historical Society’s Curator of Archaeology, made the decision to remove two or three of the most naturalistic images so that they could be brought to the museum for display. “Many of the figures at Saxon already have been wholly or partly obliterated by the action of ice and gravel floes which grind over them during times of high water or floods. With the pictures so inaccessible and visible only at infrequent intervals, and with their destruction only a matter of a short time, the Society feels itself fortunate in having secured some of the best of these petroglyphs, which were cut from their bed in the rock and are now on exhibition at the Museum.” For better or worse, three of the Saxon petroglyphs were taken from their original context.

There were no laws against doing this in 1914 and I haven’t found any documentation that a single voice was raised in protest. Until recently, these petroglyphs were on display at the small exhibition facility at the Great Circle in Newark. They were removed when we renovated the exhibits and focused the interpretation on the Newark Earthworks. In the coming weeks, the Saxon petroglyphs will be put back on display, but now they’ll be at the Ohio Historical Center in Columbus. Perhaps this exhibit can become part of the dialogue as legislators, preservationists, and others ponder the case of the Indian Head Rock. For more information about rock art in general, I recommend Jean Clottes’ recent article “Rock Art: an endangered heritage worldwide” in the Spring 2008 issue of the Journal of Anthropological Research. The best reference on Ohio’s petroglyphs is James Swauger’s comprehensive Petroglyphs of Ohio published by the Ohio University Press.