RITUAL, EARTHWORKS AND THE ORIGINS OF CIVILIZATION

RITUAL, EARTHWORKS AND THE ORIGINS OF CIVILIZATION

In a review of recent work on understanding the role of ritual in the growth of human community and the origins of civilization, Dan Jones offers insights that may be useful in explaining the extraordinary florescence of ritual, art and architecture that characterizes Ohio’s Hopewell culture.

Jones cites the work of psychologists Cristine Legare and AndrÃ© Souze who determined that people perceived rituals as more effective when they involved a large number of repetitive steps that must be performed at a specific time and in the presence of religious icons. In addition, Jones refers to research by Scott Wiltermuth and Chip Heath that synchronized physical action, such as marching, singing and dancing produces a sense of connection and trust between individuals. It seems to me that these conclusions offer an important potential avenue for explaining the effort people expended in constructing the monumental Hopewell earthworks, such as the Newark Earthworks.

The complex, monumental architecture encoding astronomical alignments provided the perfect stages for large numbers of people to gather at specific times to engage in rituals of many repetitive steps as congregants cycled through the various earthwork modules of circle, square and octagon each with its own particular set of appropriate ceremonies. And the magnificent Hopewell art constituted the religious icons, which helped to ensure the efficacy of the rituals being performed. 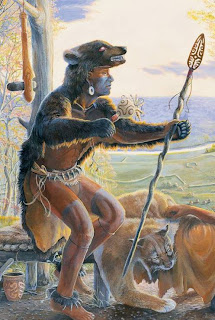 The movement of pilgrims through the earthworks, possibly in synchronized, choreographed processions, produced the sense of connection and trust between people that may have come to these places from far and wide.

According to Wiltermuth and Heath, such unifying rituals may have endowed cultural groups such as the Hopewell with an evolutionary advantage by ensuring that the members of the group were all equally committed to its enduring success.

Jones article, The ritual animal, appears in the 24 January issue of the journal Nature.