In my January column in the Columbus Dispatch I write about Jarrod Burks and Robert Cooks discoveries of lost earthworks using magnetometry, a geophysical remote sensing technology that can detect subtle changes in the magnetic properties of soils, which can reveal some kinds of archaeological sites without having to dig into the ground. Ancient earthwork foundations and filled ditches are dramatic, but they are not the only kinds of archaeological sites that remote sensing methods can detect; and magnetometry is only one of many remote sensing technologies available for archaeological investigations. The Ohio Historical Society (OHS) now routinely uses remote sensing surveys at sites prior to any planned construction activities that have the potential for disturbing the traces of past activities hidden beneath the surface that are, after all, part of the reason we preserve and interpret these sites in the first place. Over the past several years, these projects have resulted in important new discoveries many of which have been reported in this blog. 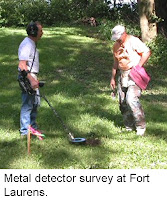 At Fort Laurens, Ohios only Revolutionary War era fort, we traced the outlines of the 18th century military occupation using metal detector surveys. We discovered a scattering of metal objects beneath the sod, including a deposit of around 200 musket balls that were intended to have been used by the U.S. soldiers stationed at the fort, but which were lost in an unfortunate accident. This work began as an attempt to discover the location of the 1764 blockhouse built by Henry Bouquets forces on or near this site, but it was expanded over the years in response to various proposed construction projects across the property. Jarrod Burks is now engaged in a remote sensing survey of the entire site. 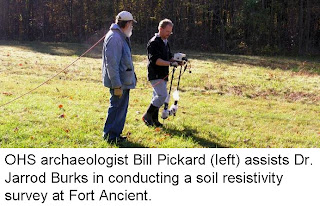 At Serpent Mound, prior to the construction of updated toilet facilities, Burks conducted a remote sensing survey of the areas that were going to be affected by the excavations necessary to install the new septic system. Burks located features that we decided to save by re-routing the proposed water lines around them. At Fort Ancient, Burks used a variety of methods to examine an area that was going to be used as an access route for heavy equipment employed in repairing damaged segments of the earthworks. Burks discovered traces of a previously unknown circular arrangement of large posts, now referred to as the Moorehead Circle. We decided to alter our plans to avoid disturbing this area, but subsequently it has become the focus of a multi-year investigation led by Robert Riordan of Wright State University. 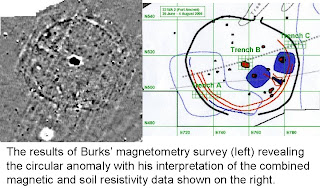 In each case, remote sensing technologies revealed important clues to our past that might otherwise have been lost. In the Serpent Mound example, the results of the survey were used to preserve the remains of the ancient feature. At Fort Laurens and Fort Ancient, the results were used to focus archaeological investigations on specific anomalies, which have revealed important new insights about these remarkable places. Stay tuned to this blog for announcements of discoveries that are sure to be made by forthcoming remote sensing investigations at some of the most important historic and prehistoric sites in the State of Ohio.

Here is a link to my column in the Dispatch: http://www.dispatch.com/content/stories/science/2012/01/22/technology-offers-peek-into-past.html

Here is a link to a previous blog post on the discovery of the large collection of musketballs at Fort Laurens: “Ft Laurens Musketball Concentration: evidence of a fight or fiasco?” http://ohio-archaeology.blogspot.com/2007/03/ft-laurens-musketball-concentration.html

Here is a link to a previous blog post on Serpent Mound project: “New discoveries at Serpent Mound” http://ohio-archaeology.blogspot.com/2011/08/new-discoveries-at-serpent-mound.html

Here is a link to a previous blog post on Fort Ancient’s Moorehead Circle: “Secrets of the Moorehead Circle” http://ohio-archaeology.blogspot.com/2011/08/secrets-of-moorehead-circle.html