Roger G. Kennedy, former director of the National Park Service, former director of the Smithsonian’s National Museum of American History and all around Renaissance Man, died at the end of September last year. I had the great pleasure of meeting Roger in 1990 when he was working on filming the first episode of Roger Kennedy’s Rediscovering America for the Discovery Channel. The program was to cover the grand sweep of eastern North American prehistory, with a focus on the great mound-building civilizations and, what he would go on to refer to as, America’s “Hidden Cities” (see his book with that title).

Although Cahokia, the great Mississippian-era city in Illinois, qualifies as a city under almost any definition, archaeologists generally do not regard the large Hopewell earthworks as “cities.” Roger, however, was expansive in his definition: “by city we mean a place in which a large number of people gather for common purposes.” Therefore, he was perfectly justified in encompassing Ohio’s Fort Ancient, the Newark Earthworks, Mound City and Serpent Mound within his marvelous narrative. 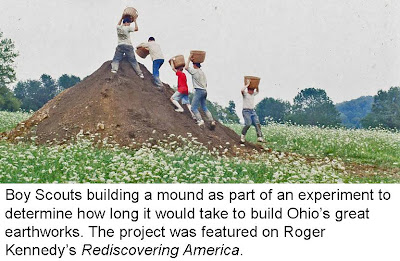 In 1990, I was a relatively new curator at the Newark Earthworks State Memorial. Roger, with characteristic flair, referred to me in his book as “chatelaine” for the earthworks. (I still wish I could make that my official job title!) Roger and his film crew interviewed me at the Munson Springs site, a Paleoindian camp site between Granville and Newark, as well as at the Newark Earthworks. We also enlisted a troop of local boy scouts and experimented with (mostly) aboriginal tools to see how long it would take to build the earthworks. (It turns out a motivated team of young men can move a lot of earth in a surprisingly short period of time!) Roger became interested in the idea of the Great Hopewell Road, which I was then only beginning to formulate; and he decided we needed to rent a helicopter and fly the route. So he arranged for the helicopter and we did just that. It was August, so we didn’t see much through the morning haze except a profusion of vegetation,but Roger became convinced that a Hopewell Road did, indeed, connect Newark and Chillicothe and even extended on to Portsmouth! I have never been willing to go that far literally or figuratively, but I agree that if there was a Great Hopewell Road connecting Newark and Chillicothe, there should be other Hopewell roads connecting other great Hopewell earthwork sites. 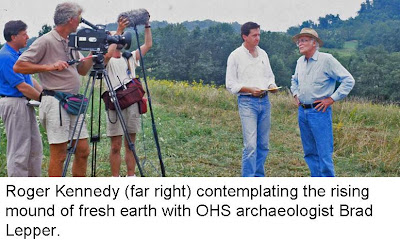 There is a funny story regarding the Rediscovering America video. You may notice in the picture of Roger and me together that we have a very similar build. (I only look taller in the image because I’m standing uphill.) Anyway, Roger had gone back to Washington, while the film crew continued shooting video at several of the sites. The director decided he needed footage of Roger walking around Serpent Mound to go with the close-up footage they had shot earlier in the week. Instead of waiting, they had me come to the site, put on a wig and Roger’s hat and walk around pretending to be Roger while they shot their video. So if you get a chance to see the program, the guy that appears to be Roger walking around the Serpent is actually me.

My most recent contact with Roger was nowhere near as much fun as our helicopter ride. We corresponded in March of 2010 regarding our joint involvement in another video project — the Lost Civilizations of North America video. Roger elected not to sign the statement that several of us who were involved wrote and which I posted on this blog in December of 2010, but that didn’t mean he was happy with the way his interview had been used. I will miss Roger. And Ohio’s ancient earthworks have lost a mighty champion.