REGIONAL VARIATION IN HOPEWELL COPPER USE

REGIONAL VARIATION IN HOPEWELL COPPER USE 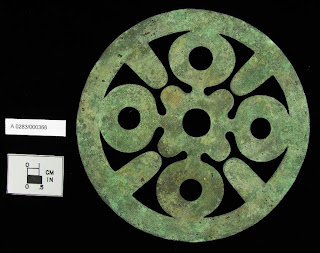 Cynthia Kocik, a recent graduate of the University of Wisconsin-La Crosse, wrote her under-graduate thesis on regional variation in Hopewell copper use. It has been published in the UW-L Journal of Undergraduate Research and is available online.

Kocik’s research was based primarily on the collections of the Milwaukee Public Museum, which includes material from Warren K. Mooreheads 1892 excavations at the Hopewell Mound Group. Mound 25, the largest Hopewell burial mound, produced by far the largest quantify and variety of copper artifacts of any assemblage in Kociks database.

Kocik compared the copper artifacts from Mound 25 with similar material from Wisconsin and Illinois River Valleysites. Her conclusions have important implications for understanding the role copper played in Hopewell societies and how it was exchanged across and between the various regional centers of Hopewell activity:

A feasible possibility would be that people from the Hopewell core interacted with those of southwestern Wisconsin the route to obtain copper near Lake Superior, or the southwestern Wisconsin people may have played a role in providing copper to people from the Hopewell core. Even in the midst of this interaction, links with the Havana region to the south and trade routes such as the Mississippi River could have persisted. Copper in some form was making its way to the Havana region, so some route and method was used to get it there. This would explain both Havana influence at the Wisconsin sites and the traits more closely associated with the Hopewell center, such as the use and/or manufacture of copper buttons.

Kociks thesis is a fine piece of research and an excellent example of the important role that museum collections can play in advancing our understanding of ancient cultures.