The Ohio Historical Society recently acquired a large collection of Ohio material from the University of Arkansas Museum. The artifacts were collected by Harry R. McPherson, a former OHS Curator of Sites, from all over Ohio back in the 1930s and 40s.

Among the stone axes and flint spear points that make up the bulk of the collection, we came across a most unusual arrowhead that most certainly was not made of flint. It had been cast out of brass. And it bore the prominent inscription NEWARK, O. MOUNDS. 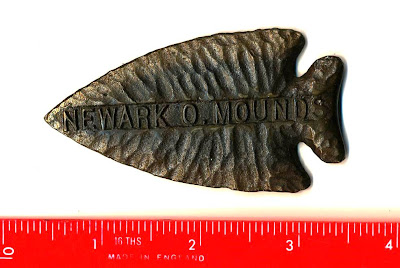 It would have been a complete mystery had I not seen an identical point many years ago when I was working as the curator of the Newark Earthworks and Flint Ridge museums. Jim Hahn, an avocational archaeologist from Licking County, brought one of these to me at my office in the small museum at the Great Circle.

He told me that these points had been made by the Wehrle Stove Company, once the largest industry in Licking County, and handed out as promotional souvenirs. Some were made of brass and others were made of cast iron.

A. T. Wehrle was a devoted artifact collector who amassed one of the largest collections in America during the 1920s and 30s. He even paid some of his employees to excavate mounds for him. One of these professional excavators was Jesse Walker. Jesse participated in the excavation of at least nine burial mounds for Wehrle and some of the artifacts from these excavations are now in the collections of the Ohio Historical Society.

Jim told me that Jesse carved the original Newark Mounds Arrowhead out of wood.

Wed be interested in hearing from anyone who might have one of these points, especially one made from cast iron. And if you have any additional information about them, please let us know.