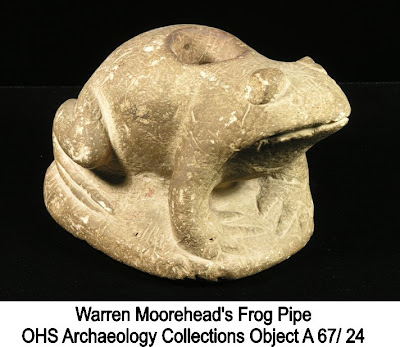 Pictured above is OHS Archaeology Collections item A67/ 24. As a type it can be placed among other large zoomorphic or animal form pipes typically referred to, at least by some astute observeres, as altar pipes. Exactly how they functioned an a particular society isn’t really known. It is fashioned from fine grained sandstone and made in the unmistakable form of a Bull Frog. It was recovered from a site overlooking the Miami River near Waynesville, Ohio and acquired by Warren K. Moorehead some time in the late 1880s early 1890s. Moorehead is famous (some say infamous) for the manner of his archaeological pursuits in the late 19th and early 20th centuries, most notably at Fort Ancient and the Hopewell Mound Group in Ohio and at Cahokia in Illinois. His activities also took him to area’s as diverse as Maine, the Arkansas River Valley and the American Southwest. He was also a prolific publisher of books and other volumes describing his fieldwork exploits as well as detailed photographs of objects and collections assembled by Moorehead and other antiquarians of his day. He went on to compile a career that was colorful to say the least. Actually Moorehead was a somewhat complicated individual who in his later life became a strong proponent of Native American rights (see the earlier blog post entitled Warren King Moorehead at Wounded Knee). A two or three sentence description here really doesn’t do him justice.

Artistically detailed zoomorphic smoking pipes have a long history in the Ohio Valley beginning with platform pipes created in the Middle Woodland or Hopewell Period of about 100 BC to AD 400. They are notable for the exquisite manner in which they were created and the fantastic variety of animals they represented. Typically the Hopewell forms were relatively small platform style effigy pipes but created in such detail that it is often times possible to identify one species from another in their renderings. Not just to distinguish a hawk from an owl but what type of hawk or what type of owl the artisan had in mind. Individual specimens or small groupings of effigy pipes have been found in Hopewell contexts in Ohio and elsewhere in the greater Mississippi Valley. There were however two rather famous great caches of effigy platform pipes recovered in the south central Scioto Valley in Ohio. The Tremper Cache of 145 pipes was recovered from the Tremper Mound located just north of Portsmouth. Of these 85 were of the effigy type while the others displayed a cylinder to vasiform or vase-like shaped smoking bowl that range from less than an inch to over four inches in height. Much of the Tremper Cache is on display at the Ohio Historical Center. There was also a cache of nearly 200 animal and human effigy pipes and other materials recovered by Squier and Davis (most notably Davis) from Mound Eight at Mound City near Chillicothe. Due in large part to a resentful break-up of their partnership these eventually ended up in the British Museum where they remain today.

There is also a history of large zoomorphic pipes in the Hopewell period as demonstrated by those recovered from the Seip Mound by Henry Shetrone, but they are more the exception than the rule. These were carved from steatite or some other relatively soft stone not native to Ohio and were probably imported into the site from regions south of the Ohio River. A number of the large Seip pipes are also in display at the Ohio Historical Center. For a number of reasons including the raw material used, the subject matter and how it is presented A 67/ 24 likely falls into a later period of around AD1000 -1600 where large zoomorphic pipes seem to be more prevalent but as an isolated find it isn’t possible to ascribe it to a particular period of Ohio pre-history. But in the tradition of the platform pipes from the Tremper Mound and Mound City and some of the later large pipes, especially those from the south , the Moorehead pipe is notable for the very true to life manner in which it was rendered.

Art historians refer to this detailed and life-like quality as verism although this term is usually reserved for statuary from Roman and Greek antiquity. However, A67/ 24 is particularly exceptional in the details used in its presentation. Just like a living Bull Frog the front legs are bowed outward at the elbows and the front feet turned in with the toes splayed in a fan-like manner, exactly as it would be seen sitting at the edge of a pond. Even the protruding distal ends of the tibiofibula or the heels of the rear feet are represented with a true sense of realism. Similarly, the frogs eyes distinctively bulge from the top of the head as typically seen on some other frog renderings in the OHS archaeology collections but here a detail as subtle as the protective nictitating membrane was thought important enough to be at least slightly indicated. Often times features like these are presented in a more generalized or abstract manner if at all. It seems evident that whoever created the Moorehead pipe was a true master who was particularly observant and almost a slave to the details of natural realism.

The Moorehead Frog Pipe, item A67/ 24, is now on display in the Encountering the Sacred section of the Following In Ancient Footsteps exhibit at the Oho Historical Center. For further reading see Exploration of the Tremper Mound by William C. Mills in Ohio Archaeological and Historical Society Quarterly, Volume XXV and Masterworks in Pipestone: Treasure from Tremper Mound by Martha Potter Otto in Timeline Magazine, October 1984.