In 1931, Emerson Greenman, then Curator of Archaeology for the Ohio Historical Society, published an article in Echoes, the Societys newsletter, entitled Ohios Undiscovered Square Mile. The article included a delightful map prepared by H. R. Goodwin, the Societys Registrar and Honorary Curator of Mineralogy. It was a Prehistoric Map of Ohio showing the landmarks of the indigenous Native American cultures. 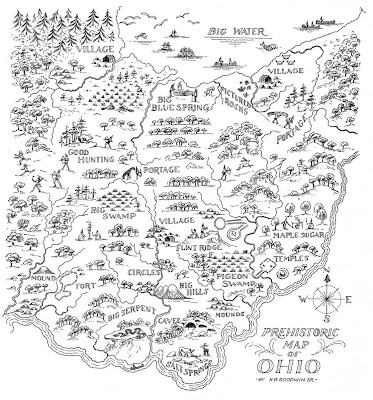 Greenman and Goodwin were attempting to show that we were not the first people to make our homes in this wonderful country:

We call Ohio our home, and act very much as if that home had always been in possession of our family. But that is not the case. Many times, the place where you live, or at the corner where you catch the street car, or over in that vacant lot across from your house, have all been fought for, hunted over and camped on by human beings who had never heard of you, nor of Ohio nor of the United States.
It is not difficult for us to see why our ancestors picked out the places that were popular in prehistoric times. The mouths of the largest rivers in Lake Erie and in the Ohio river were points where lines of travel converged. As for Chillicothe, the early settlers from Virginia chose this site because of its beauty, with Mt. Logan and other magnificent hills surrounding a spacious level plain upon which Ohios first capitol could be built. Centuries before, the Mound Builders chose this picturesque valley for exactly the same reason, for here may be found a large number of their burial mounds and sacred enclosures.

Greenman makes the point that we not only share the landscape with the traces of ancient cultures, but our Native American heritage is revealed in other ways:

Our ideas about nature, and perhaps even some of our national idiosyncrasies may be traced to the Indians, and some our best foods were the main dishes on prehistoric menus.

Finally, Greeman expresses the hope that the Ohio Historical Societys efforts to recover the traces of the past preserved beneath the undiscovered square mile hidden by the burial mounds then remaining might be seen as a sign of respect for the ancient mound-building peoples.

I do believe that the Societys archaeological investigation of burial mounds was an expression of profound respect as our curators worked to add the stories of these ancient Ohioans to the formerly nearly blank pages in the chronicle of world cultures.
Now, however, the number of undamaged burial mounds has become so small that the preservation of these monuments and their study using the increasing variety of non-intrusive remote sensing technologies must become our priority.