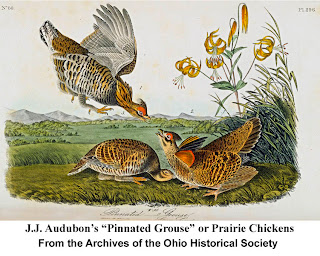 When Ohio birders think of Prairie Chickens, thoughts generally turn toward Effingham, Illinois. A couple of years ago I had the privilege of joining a group from the Columbus Audubon Society on a trip to see these fascinating birds at the Prairie Ridge State Natural Area a few miles east of Effingham.

We arrived at the refuge well before dawn and were led to the reservable observation blinds through the dark by the refuge manager. We quietly crowded into the two blinds, and then sat waiting for dawn. At least a half-hour before dawn we could begin to hear the faint and yet far away call of the Greater Prairie Chicken, Tympanuchus cupido. Their song, usually called booming carries far, but is a soft, non-musical, hollow-sounding song that has been described as “whhooo-doo-doooh.” To me, it sounds sort of mystical or magical. Of course, much of that may be a result of the rarity of this bird and the amount of effort needed for an Ohioan to see and hear it. Add to that the magical atmosphere of twilight changing to dawn, and it is a wonderful experience. You can listen to this at the Cornell Laboratory of Ornithology site.

But Prairie Chickens in Ohio? Most folks would never imagine that possibility. In McCormac and Kennedys 2004 publication, Birds of Ohio the Prairie Chicken is not even mentioned, other than as a note on the checklist on page 346 that indicates ex which the key tells us means extinct or extirpated. 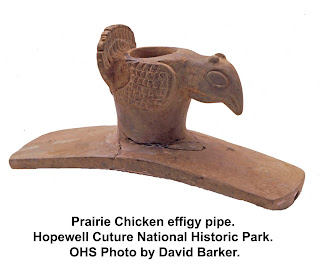 As you dig deeper, we discover that there are at least nine archaeological sites in southern Ohio that contained bones of Prairie Chickens. An effigy pipe in the shape of a Prairie Chicken was uncovered in a mound at the Hopewell Culture National Historical Park on the north edge of Chillicothe. These archaeological records show that between 1000 and 2000 years ago, Prairie Chickens were in Ohio and were utilized by American Indians of that time. Based upon the frequency of bones, they were probably already in relatively few numbers. Between 4,000 and 8,000 years ago there was a much warmer, drier climatic period known as the hypsithermal period. Sometimes this is just called the Prairie Peninsula Period, and it brought prairie into Ohio, and presumably the Prairie Chicken. Since that time, much of Ohio has reverted to forests and prairie areas have gradually gotten squeezed out. Yet, at the time of settlement, Ohio still had about 1500 square miles of prairie and the Prairie Chicken had persisted. Clearing of the land for agriculture actually helped at first as the dense forest areas were converted to pasture land for grazing by livestock that were needed to farm the land. In 1835, Toledo judge E. D. Potter reported seeing 500 Prairie Chickens on Summit Street near Oak and thousands on open land six miles west of town. But by 1879 Dr. J. W. Wheaton (an important early ornithologist as well as medical doctor) noted that while they could still be found in Wyandot and Sandusky Counties, they were now rare. Apparently, their populations came and went a couple of times variously reported as extirpated in Ohio in 1903, and after several newer sightings, again in 1937.

But why did the Prairie Chicken disappear from Ohio? What brought about its demise? The total answer probably involves several factors. One would be a shift in agriculture from horse-drawn equipment to modern tractors, thereby also seeing a major reduction in pasture land. Early on, a major influence was market hunting. Modern, managed game hunting has never driven a species to extirpation or extinction but market hunting was a totally different thing. Early in our states history there were no scientifically based game laws. Market hunters shot as many animals as they could, year-round. In 1857, Ohio passed its first law to protect species, and part of those regulations created a closed season. With this new law, you could only hunt Prairie Chickens for a 140-day season. But there was still no such thing as a bag limit. Audubon reported that at one point in time in Kentucky, they were so numerous that they sold for a penny apiece, but that 25 years later so many had been shot that they sold for $5 to $10 a pair. In 1873, more than 600,000 Prairie Chickens were sold in the markets of Chicago for $3.75 a dozen. In 1902 Prairie Chickens were given total protection in Ohio but they may have been virtually gone anyway. 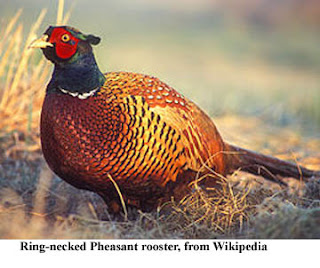 Perhaps a bigger, though less noticeable problem was competition. By 1900 Ring-necked Pheasants had been introduced into Ohio from their native home in China, Korea and southern Siberia. By 1932 their populations had exploded with counts 200 to 300 pheasants per square mile in several parts of the state. Several observers noted pheasants chasing Prairie Chickens from their booming grounds. The booming grounds are where male Prairie Chickens perform their dance and their song drawing in females with which they then mate. Being chased off before mating makes it hard to produce young but of course, where there is a will there is often a way! More insidious is the practice of Ring-necked Pheasants to lay eggs in other pheasant nests and nests of Prairie Chickens. Ground nesting birds synchronize hatching by delaying incubation until the last egg is laid. That way, all chicks hatch the same day, and leave the nest as soon as their feathers have dried. Prairie Chickens have an incubation period of 25 days but pheasants only need 23 days. So the brooding mother Prairie Chicken with a single pheasant egg amongst her own brood abandons the nest as soon as the first pheasant hatches, leaving her entire clutch doomed to death. 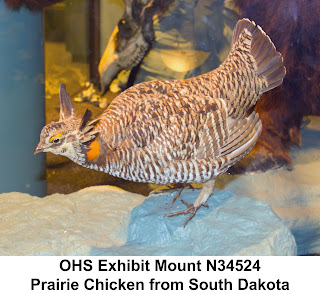 We wanted this story to be a part of our exhibits in The Nature of Ohio exhibits. To do so, we were able to obtain the animal shown here (Catalog Number N 34524) from South Dakota, and have it mounted by Craig Ciola of LaRue, Ohio. That exhibit, and this Blog, really only provide an overview of the story of Ohios Prairie Chickens. To read more, you might want to pick up a copy of the Ohio Historical Society’s Timeline magazine dated June/July 1989 for my article Competition Breeds Disaster: The Demise of the Prairie Chicken. This issue is available at the Ohio History e-Store, or may be viewed in the OHS Library reading room.