POVERTY POINT AND THE NEWARK EARTHWORKS

POVERTY POINT AND THE NEWARK EARTHWORKS 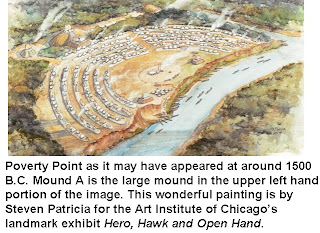 The Monumental Earthworks of Poverty Point is being nominated by the U.S.Department of State for inscription on the United Nations Educational, Scientific and Cultural Organization’s (UNESCO) World Heritage List. Poverty Point is an amazing site! It’s amazing for the sheer scale of the earthworks, which are spread across more than 700 acres, but the most incredible thing about it is that it dates to between 1700 and 1100 B.C. If you’re not familiar with the timeline of eastern North American prehistory, that span of years lies within the Late Archaic period. The cultures of that era depended upon hunting and gathering for their livelihoods and, in Ohio at least, they were not yet building mounds let alone gigantic earthworks on the scale of Poverty Point.

In my January column in the Columbus Dispatch I review a recently published paper by Anthony Ortmann and Tristram Kidder in which they report the results of their excavations into Mound A — “the most prominent architectural feature at Poverty Point.” Mound A is positioned to the west of the outermost of a series of six concentric, arc-shaped embankments surrounding a small plaza. Its estimated volume is 238,500 cubic meters, or about 8 million cubic feet. Ortmann and Kidder decided to investigate Mound A “with the specific goals of understanding the construction history (methods, pace, and duration of construction) as well as functional aspects of the mound.” Their detailed analyses of the sediments comprising the mound indicate that it was not built in stages, but in one furious burst of activity lasting no more than 3 months. So, not only is it amazing that hunter-gatherers built this magnificent mound, which is as tall as Ohio’s Miamisburg Mound, but they somehow marshaled the labor force to accomplish the feat in an almost unbelievably short period of time considering that hunter-gatherers generally live in relatively small groups. In most regions of the world, monumental architecture is a hallmark of urban societies that are supported by agriculture as well as some kind of political hierarchy whereby a pharaoh or a chief is able to command his subjects to undertake such massive public works projects. The hunter-gatherers of Poverty Point had neither agriculture nor kings. 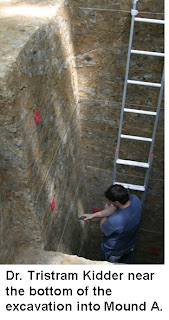 The people of Ohio’s Hopewell culture, beginning at around 100 B.C., had domesticated a series of plants that made an important contribution to their diet, but they still relied mostly on hunting and gathering for the bulk of their food. They also had no centralized leadership. Nevertheless, they too built magnificent earthworks in numbers and on a scale that dwarfed the precocious and singular accomplishment of their distant (in time as well as space) cousins at Poverty Point. In a paper I wrote back in 2004, I suggested that the Newark Earthworks, conservatively estimated to have been constructed from about 7 million cubic feet of earth, might have been built within the lifetime of the person (or persons) that designed it. At the time, I thought that my suggestion was fairly radical. But if the Late Archaic hunter-gatherers at Poverty Point could pile up 8 million cubic feet of earth in three months, then maybe it’s not so hard to imagine Newark’s Hopewell people sculpting their 7 million cubic feet of earth into precise geometric patterns across 3-and-a-half square miles in a period of years rather than decades or centuries. The Hopewell Ceremonial Earthworks, including the Newark Earthworks, Fort Ancient, and the five sites that are part of Hopewell Culture National Historical Park, are on the United States Tentative List for consideration as sites to nominate for inscription on the World Heritage List. Hopefully, it will be one of the nominations next in line for submission to UNESCO. 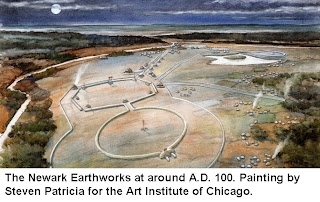 If you’d like to read more about Anthony Ortmann’s and Tristram Kidder’s work at Poverty Point, check out their paper in the January 2013 issue of Geoarchaeology: “Building Mound A at Poverty Point, Louisiana: monumental public architecture, ritual practice, and implications for hunter-gatherer complexity.” Geoarchaeology 28:66-86.

If you’re interested in reading my 2004 essay on the Newark Earthworks, here’s the full reference:

Thanks to Tony Ortmann for the terrific images of the Mound A excavation.