Thousands of years ago throughout the Ohio Valley and much of North America in general Mastodons and other forms of large Ice-Age animals or megafauna were the dominant life form. Distant cousins of the modern elephant, Mastodons were a relatively abundant species that seemed well suited to the wet, forested areas of Ohio’s post glacial environment. It roamed these environments for thousands of years before finally becoming extinct 10-12, 000 years ago, not long after humans first entered this part of the world. Other forms of Pleistocene or Ice Age megafauna whose remains are also occasionally unearthed include Mammoth, Cervalces or Stag-Moose, Giant Beaver, Ground Sloths, Musk Ox and Short Faced Bear. For whatever reason these and many other species all seemed to disappear from the landscape at about the same time. Was it over hunting by early humans, or climate change or disease? Its a debate that has been going on for quite some time now and at present doesn’t appear to be any closer to being resolved than it was at any other time in the past. 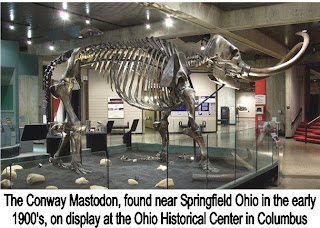 Skeletal elements of various megafauna can turn up just about anywhere. It isn’t unheard of to find a single mastodon and mammoth tooth along small creek bank that eroded out of its primary context some distance upstream. Despite their rough and tumble trip downstream the teeth usually survive mostly intact because of thier tough enamel make up. Other bone and antler fragments might be overlooked or their ancient age unrecognized unless they are some oversized leg bone or tusk section. However, the largest and best preserved examples are usually found in and around remnant natural ponds, exposed ancient lake bottoms and other boggy, wet areas that are the last vestiges of the environment in which they lived. They are often discovered by farmers expanding or deepening a pond, harvesting peat or during some other type of construction. Complete or nearly complete skeletons of single animals have certainly been discovered in the past, museums are full of them, but finds are sometimes limited to one or two or a few of the larger and more noticeable bones. Discoveries of the bones of great beasts have generated tremendous public interest since the first great mastodon skeleton was unearthed in the Hudson Valley in 1801. Local folk in that area were said to have turned out in droves just to watch the activities. In 1926 the excavation of the Johnstown Ohio Mastodon created similar public interest. It was one of the most complete specimens ever recovered and is now at home at the Cleveland Museum of Natural History. 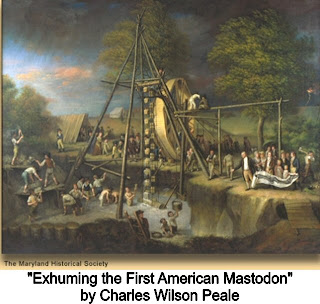 Even at that there is sometimes a certain amount of confusion about exactly what is being unearthed. When the Burning Tree Mastodon was discovered near Newark Ohio in 1989 the equipment operator looked at the skull and thought he had unearthed some sort of bee hive. Go figure. It should also be noted that the Pleistocene was not a time of just giant animals although there were a lot of them. If one were to take the time to look through the anaerobic muck soils where the larger fossil bones are typically found they would likely discover the remains a whole range of small mollusks, fishes, amphibians, tiny mammals, insects, plant seeds, leaves and branches and even pollen grains that became sealed in the deposit. Its the stuff of the pristine, untouched environment that humans first encountered and if processed properly can provide a wealth of environmental, ecological and climate trend information. Unfortunately until recently this sort of material was largely overlooked. While the bones of the big animals are often seen as spectacular finds (and rightfully so) it is the other residue of small animal and plant remains that better sheds light on exactly what the world was all about back in the day. Although the occasional unexpected fossil find down on the farm might peak local interest for a few months or years, places like Big Bone Lick and other mineral/salt springs in northern Kentucky have been well known as the source of finely preserved fossils for more than two centuries and in that time the Big Bone site has produced the remains of hundreds of animals. 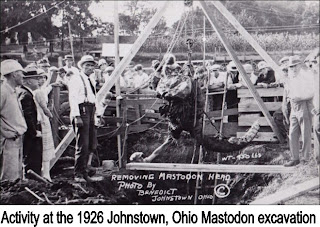 As early as the mid 1700s explorers like Christopher Gist were making note of the scattered bones of great beasts lying about the salt springs. It was said that early visitors to the site even used disarticulated mammoth vertebrae as sitting stools. Thomas Jefferson was so intrigued by the site that he would later send William Clark there on a collecting expedition. Unfortunately many of the fine specimens Clark recovered were lost in transit to Jefferson. The Hiscock Site near the town of Byron in western NY has been known only since the late 1950s when Mr. Hiscock unearthed a mastodon tusk while expanding a pond. Serious exploration of the site began in the 1980s by the Buffalo Museum of Science and since then the remains of at least 60 different species have been recovered including those of all things Gymnogyps californianus or California Condor. The 52 acre site was once covered by glacial Lake Tonawanda and even today that part of New York State remains a somewhat boggy region of marshes, wet lands and numerous spring-fed ponds. As the glaciers retreated thousands of years ago both animals and humans became attracted to the area both by the mineral rich springs as well as its general location in a natural east-west migration corridor along the southern edge of Lake Ontario. 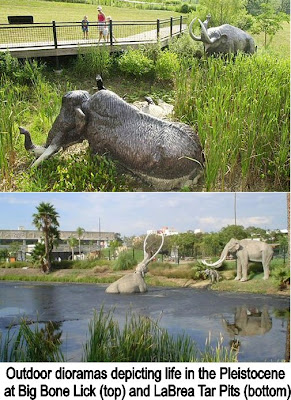 However, the greatest paleontological site in North America – if not the world – is the LaBrea Tar Pits in Los Angeles California. The well preserved remains of literally tens of thousands of individual animals, from centipedes to the giant Columbian Mammoth, have been excavated from the Tar pits since the deposit was first discovered in the early 1900s. Many of these can be viewed at the George Paige Museum at the LaBrea site located on Wilshire Boulevard in downtown L.A. If one such site is to be visited this is it! It is almost appropriate that it would be located just down the street from Hollywood. Where else should such a lost world wonder be found? To be accurate the use of the term Tar Pit is somewhat of a misnomer. It has only been a pit or series of pits since the area was mined for asphalt, a sticky tar-like substance related to petroleum. Originally thetar seeped to the surface through mounded vents, eventually covering large areas of the surrounding landscape. The lighter petroleum fraction would evaporate leaving a thick, black residue. This would in turn get covered by dust, plant debris and rain water. Unsuspecting megefauna like the mammoth, mastodon and bison and others would be drawn to the area to water at the ponds and become stuck in the tar like giant flies on fly paper. Saber tooth cats, dire wolves, American lions and other predators would show up to take advantage of the great bounty of trapped animals and would themselves get stuck as would vultures, raptors, reptiles, small mammals, birds, insects or any other small critter that made a living scavenging off scavengers. Leaves, seeds and pollen would become part of the mix as well. The petroleum based tar seems to be an excellent preserving agent. Not unlike the muck soils found at the megafauna fossil sites back east, they contain a sampling of just about every type of plant, animal or insect that existed in the L.A. basin over a time span that covered tens of thousands of years. Pretty amazing stuff! 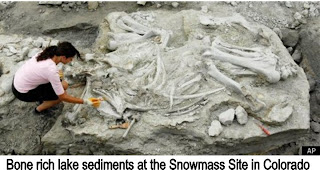 Other than a skeleton of some great beast that shows up on occasion as the result of farming or pond building, like the Chippewa Lake Cervalces scotti or Stag Moose discovered in Medina County Ohio in 2008, it would seem that all the great finds have been made, but perhaps not. Workers digging a retention pond for a ski resort near Snowmass, Colorado last fall brought several large bones to the surface. Subsequent excavations by the Denver Museum of Nature and Science have produced more than 4,500 bones and the identification of at least 20 species from giant mammoths to tiny salamanders that inhabited what was 100,000 years ago, a large, high altitude lake. The excavations have been partially funded by the National Geographic Society and will be featured in a National Geographic television special slated to be aired next year. Attached are a couple of links for further reading.