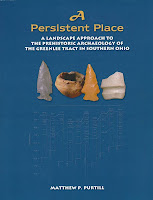 Archaeological landscapes have been compared to palimpsests — parchment pages from which the text has been scraped away to allow new layers of text to be added. With careful study, however, those old layers often can be recovered.

Some pages of Ohio’s landscape can appear to be blank — perhaps because not much happened there (I am reminded of the brass plaque my Dad attached to our house that read “On this site in 1897, nothing happened”) or possibly because geological processes have scoured away the traces of past human activity.

There are, however, certain places that, because of some special quality, have been written upon again and again throughout the millennia. The archaeologist Sarah Schlanger has written that the special qualities that draw people back again and again to, what she describes as, “persistent places” can be the result of either a feature of the natural landscape, such as the reliable presence of fresh water, or cultural modifications to a landscape that leave a lasting imprint and are, for whatever reasons, attractive to later generations.

Matthew Purtill’s new book, A Persistent Place: a landscape approach to the prehistoric archaeology of the Greenlee Tract in southern Ohio, presents the rich prehistory of an 85-acre swath of Adams County situated between the Ohio River and the steep-sided bluffs to the north. I summarize a bit of this prehistory in my September column in the Columbus Dispatch.

Purtill is an archaeologist who works for Gray and Pape, Inc., a Cincinnati-based Cultural Resource Management (CRM) firm. CRM archaeology refers to archaeological investigations conducted when projects that, at some level, include the involvement of the federal government potentially threaten archaeological sites that might prove to be nationally significant.

In the case of the Greenlee Tract, the property owner, Dayton Power and Light proposed to expand its fly-ash disposal fields beginning in the early 1990s. Archaeological investigations were undertaken presumably because the planned construction would take place along the Ohio River, a navigable waterway, and so U.S. Army Corps of Engineers permits were required.

Kevin Pape, the President of Gray and Pape, Inc., wrote in the Foreward to Purtill’s book that since around 1993, Gray and Pape has been working together with Dayton Power and Light “to balance the requirements of on-going power generation with the company’s commitment to stewardship of archaeological resources on station property.” The result, according to Pape, was “an opportunity seldom available to archaeologists working in the context of cultural resource management: singular focus on a suite of archaeological resources set in a location occupied across the span of 12,000 years.”

Purtill’s book represents the fruit of this partnership and everyone involved deserves to be congratulated. Most CRM archaeology reports are seldom seen by anyone outside a small circle of CRM professionals, but this book is accessible to a wide audience and deserves to be read by anyone interested in Ohio’s ancient history.

Curiously, Purtill concludes that “no single unifying quality or characteristic completely accounts for why groups persistently utilized this property. Instead, throughout its industrious prehistory, multiple factors account for why the Greenlee Tract was a destination for various groups.”

All of us should be grateful for the fortuitous confluence of factors that not only produced this persistent place, but also placed it in the hands of responsible corporate stewards and dedicated archaeologists who recovered these pages of unwritten history and who now share them in the pages of this splendid book.

I hope it serves as an example for other CRM firms and their clients — and not just in Ohio!