Cultural Resource Management (CRM) investigations at the Leetsdale site (36AL480) in Allegheny County, Pennsylvania, have uncovered a long sequence of prehistoric occupations spanning the Middle Archaic through the Early Woodland periods. This encompasses the transition from highly mobile hunting and gathering cultures to more sedentary folk beginning to experiment with domesticated plants. Of particular importance is the extensive Middle Archaic component. Sites dating to this period are quite rare in the Ohio Valley suggesting either fewer Middle Archaic people in the valley or else a subsequent burst of extraordinary flooding that scoured away much of the evidence.

Site 36AL480, a stratified multi-component site along the Ohio River floodplain in Allegheny County, Pennsylvania, was impacted by the Districts construction of Braddock Dam segments in Leetsdale Industrial Park.  Data recovery excavations for mitigation were undertaken concurrent with construction from 1999-2003.  The site included a 19th century brickworks overlying Native American occupations dating back about 6,800 years, discretely preserved in floodplain deposits.  Geomorphology and regional environmental reconstruction played a significant role in the excavations and site interpretation.  No other site of this type has been excavated under controlled conditions along the upper Ohio River in Pennsylvania.

Site 36AL480 was characterized as a large, approximately 4.9-hectare (12-acre), multi-component, stratified archaeological site on a terrace of the Ohio River. Archaeological components included historic surface deposits from a former brick works and prehistoric components radiocarbon dated from the Early Woodland (1000 B.C. 200 A.D.) through the early Middle Archaic (6,000 – 4,000 B.C.) periods. Depths of occupation surfaces varied across the site, ranging from ground surface (historic brickworks remains) to 4.7 m below ground surface. This site is the only recorded large stratified site along the Upper Ohio River Valley in Pennsylvania having so many intact occupations separated by sterile alluvial deposits. There have been no modern large-scale site excavations of a similar stratified site in the Upper Ohio Valley in Pennsylvania, West Virginia, or eastern Ohio. 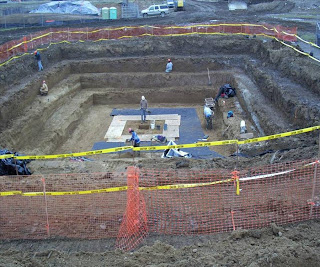 If you’d like to read the entire report, you may request an electronic copy from the U.S. Army Corps of Engineers, Pittsburgh District. Contact the District Public Affairs Office either by phone at (412)395-7500, or by email: [email protected].
The Ohio-based CRM firms ASC Group, Inc. and Hardlines Design Company conducted the Phase III archaeological investigations for this project.