Paleoindian is the term archaeologists use to refer to the first Americans. Cultures encompassed by the name span a period of more than 5,000 years of unwritten history (from at least 14,000 years ago up to about 9,000 years ago) and extend over more than 16 million square miles of geographic diversity spread across nearly 130 degrees of latitude. Yet, in spite of the correspondingly diverse cultures we should expect across these vast stretches of time and space, the most widely accepted picture of Paleoindians is one of small bands of highly mobile big-game hunters with the early groups focused on hunting mammoths and mastodons into extinction, whereas later Paleoindians, at least on the Plains, turned their attention to bison with impressive, but less definitive results. In fact, this picture is likely to be wrong in many particulars.

The evidence increasingly is pointing to more diversity in Paleoindian lifeways across the hemisphere and the role played by humans in the extinction of the Pleistocene megafauna is far from clear. One of the reasons we likely have exaggerated the extent to which Paleoindians were focused on big-game hunting is that hunting gear is made from stone. And, as the button on my field pack reminds us, while love may be fleeting, stone tools are forever. Other kinds of tools, such as wooden digging sticks and baskets used in gathering plant foods, are made from perishable materials that would only rarely be preserved after millennia of burial in the soil. So even if gathering nuts was an important part of the Paleoindian diet, as indeed it was for later hunter-gatherers, we’d have a hard time finding the evidence for it. A more dangerously subtle bias is the often single-minded focus of archaeologists on Paleoindian stone-tool technology and hunting practices to the neglect of the social and religious lives of these ancient people, which admittedly are much harder to discern from the meager evidence. It is relatively easy to read the story of big-game hunting in stone spear points, but those same stone points also may have other kinds of stories to tell. Paleoindian spear points tend to be large, beautifully-made, and crafted from especially nice flint often obtained from some faraway source. If all Paleoindians wanted was an effective tool to poke holes in a mastodon, then almost any sort of sharp rock tied to a stick would do. Heck, even a sturdy stick with a sharp, fire-hardened tip and no stone point at all could have done the job.

In the new Archaeology exhibit at the Ohio Historical Society, Following in Ancient Footsteps, we have a case devoted to artifacts we think had a predominantly ceremonial significance for Ohio’s ancient cultures. It wasn’t hard to fill the drawers devoted to later cultures, such as the Adena and Hopewell that were more sedentary and so could create and accumulate their exquisite ceremonial art, but whatever artifacts Paleoindians used in their ceremonies would have to be carried with them from place to place. What would be the hallmark of Paleoindian ceremony? 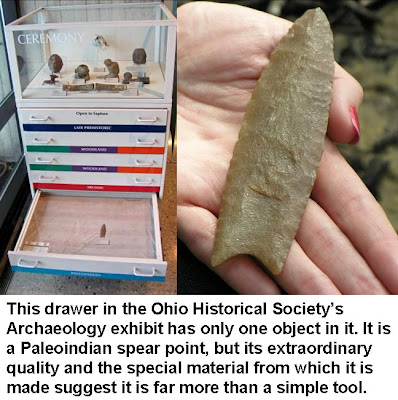 Those of us who put the exhibit together chose one object that we felt conveyed something beyond simple utility, while remaining a serviceable tool something simultaneously practical and extraordinary. It’s a marvelous Clovis point from Adams County. Clovis points are among the earliest of Paleoindian spear points. This one is a masterpiece of flintknapping made from Hixton silicified sandstone, a glittering, honey-colored stone that came from a quarry in western Wisconsin — more than 600 miles from where the Clovis point was found. We think this spear point was more than just an ordinary tool. It’s a work of art and a window onto Paleoindian values and beliefs.

In my April archaeology column in the Columbus Dispatch, I describe the Crowfield site in southwestern Ontario. Its principal feature is a deposit of burned fragments of 180 stone tools that appears to be an offering that accompanied the cremation burial of an individual Paleoindian. The collection represents a more or less complete tool kit for a Paleoindian hunter and its clear that it was deliberately destroyed.The spear points from the deposit are known as Crowfield points. They are not masterpieces and they’re not made from an exotic type of stone, but they too became more than ordinary tools when they were burned as part of a Paleoindian ceremony. Paleoindians did not live by red meat alone. They also must have felt the need to find meaning in their lives beyond the next meal. We may only have their stone tools to work with, but some of those tools may point us towards an understanding of Paleoindian ceremonial lives. 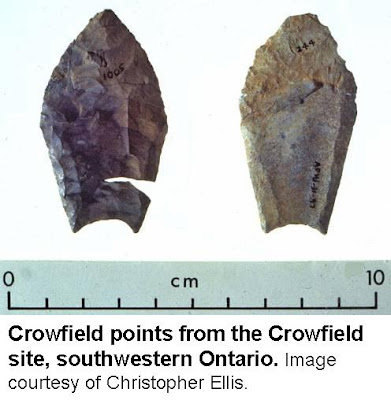 Here is a link to my column in the Dispatch: http://www.dispatch.com/content/stories/science/2012/04/15/paleo-indian-site-might-demonstrate-early-ritual.html

Here is the full reference for the final report on the Crowfield site: Deller, D. Brian & Christopher J. Ellis 2011 Crowfield (AfHj-31): a unique Paleoindian fluted point site from southwestern Ontario. Memoirs of the Museum of Anthropology, University of Michigan, No. 49. Ann Arbor.

For further reading on the topic of why much of what we think we know about Paleoindians might be wrong, I recommend the soon-to-be-published provocative paper by John Speth and his University of Michigan grad students: Speth, John D., Khori Newlander, Andrew A. White, Ashley K. Lemke, & Lars E. Anderson 2012 Early Paleoindian big-game hunting in North America: provisioning or politics? Quaternary International, in press. For more information about the Hixton silicified sandstone fluted point, check out this previous blog post by Bill Pickard: Of Cheese Heads and Clovis Points: a possible occurrence of Hixton silicified sandstone in the Ohio Valley: http://ohio-archaeology.blogspot.com/2011/02/of-cheese-heads-and-clovis-points.html Brad Lepper 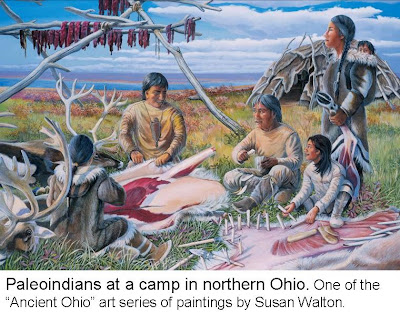