Readers of my most recent article in the January issue of the Mammoth Trumpet are being treated to a picture of OHS’s own Juli Six. Juli is shown holding one of the finest Clovis points in the Ohio Historical Society’s collections. It was found in Adams County, but is made from a beautiful stone from Wisconsin. 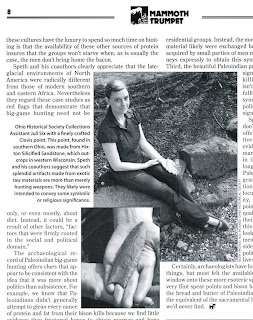 The article in which the photograph appears is on “The Big-Game Hunting Conundrum” and it begins with a provocative question:

“What if everything you think you know about Paleoindians is wrong?”

In the article I summarize the recently published research of University of Michigan archaeologist John Speth and his grad students in which they argue that “the beautiful Paleoindian projectile points weren’t designed principally to serve as killing weapons…, but as symbols pregnant with social, political, and even religious significance.”

I wrote a bit about this general idea in a previous blog post on Paleoindian Ceremonies and used an image of the same Clovis point to illustrate the argument.

In the same issue of the Mammoth Trumpet, I have an article on giant ground sloth bones found in northern Ohio that appear to have cut marks on them made by Paleoindian knives at a period older than Clovis! 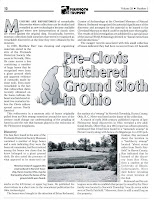